Day of the Fallen Heroes 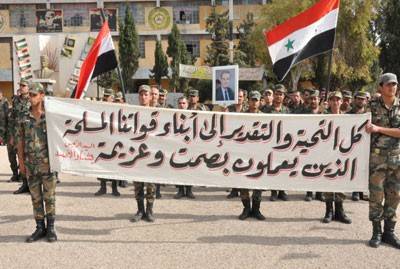 6 May Day in Syria is celebrated. On this day in 1916, the Turkish invaders executed dozens of people who fought for the freedom of their homeland.


The conspiracy organized against Syria by such neo-colonial countries as the USA, France, Britain, Turkey, as well as their accomplices in the Arab world - Qatar and Saudi Arabia - killed hundreds of thousands of Syrians. New martyrs joined those who died fighting for Syria’s independence from the Turkish invaders and French colonialists in the early twentieth century, who fell in battles with the Israeli aggressor in 1967 and 1973. All these battles are heroes. There is no exception and the current confrontation, which in its scale and the number of victims surpasses all that was still in Syria.

In fact, in each city there are several walls, specially designated for portraits of the fallen patriots - both military and civilian: journalists, civil servants, students, doctors, workers ...

Participants in the meeting of the Council of Ministers held on May 6 commemorated those who died in those years. Prime Minister Wa'il Al-Khalki Al-Khalki stressed the need for the government and society to pay special attention to the families of those who gave their lives. He also confirmed that the country's leadership provides assistance to relatives of the dead, as well as to the wounded.

Usually, on the Day of the Fallen, ATS President Bashar Al-Asad laid flowers at the memorial to the Unknown Soldier on Mount Kasiyun in Damascus. But now, when new fallen heroes appeared in Syria — the head of state did not come to the monument, but to living people — to the relatives of the dead.

During the meeting, he said that the Day of the Fallen means a lot to all Syrians, who are proud of the heroic deeds of the country's heroes. The strength and courage of the fighting fighters, according to the president, are the basis of Syria’s resilience in the face of terrorism and the forces supporting it.

A solemn ceremony was held in Damascus in memory of journalists who died while fulfilling their professional duty during the current crisis. As stated at the ceremonial evening, adviser to the president of the SAR on political and informational issues, Bussein Shaaban, the so-called “Arab Spring” is a “bloody winter” when interfaith enmity swells and ideas of Wahhabism alien to Syrian society are implanted.

On the campus of Damascus University, young people and teachers laid flowers at the memorial to students who died from terrorist attacks.

In addition, in the Syrian capital, a blood donation campaign was organized for injured soldiers, officers, policemen and ordinary civilians in a hospital. SAD Minister of Health Saad An-Naif took part in it. This donor action was highly appreciated by Elizabeth Hoff, the official representative of the World Health Organization (WHO).

Governors, representatives of the public and parties, as well as young people visited memorials and cemeteries in various provinces of the country, where heroes found their last refuge. In addition, they visited the wounded in hospitals. The Day of the Fallen was solemnly celebrated in the Armed Forces.

Unfortunately, even on such a day, the number of martyrs in Syria increased.

In Damascus, the neighborhoods of Salhia, Tajihs, Arnus Square and the Al-Hassan Mosque were subjected to terrorist mortar attacks. One person died, 30 suffered.

Three mortar shells exploded on An-Nejme Square. Died a Syrian citizen of Lebanon. 23 people were injured, three of whom were children.

Another missile hit a residential building opposite the Dar Al-Salam school. A fire broke out in which a six-month-old girl, her grandfather and grandmother almost died. Fortunately, they managed to save them. But after a short time, the terrorists fired another shell in the same area, a fragment of which injured the fire engine driver who arrived at the scene.

Three people were injured by the shelling of the Louis hospital in al-Kassaa.

In the city of Aleppo, “opposition” militants fired shells at the Jamiliah quarter and the Saadallah Al-Jaberi square. As a result, 7 citizens died and 30 injured.

In the province of Hama, several residents of the village of Mharda were hit by improvised rocket attacks. And in the village of Halfaya, two children were injured as a result of the same crime.

But while the people of Syria honor the memory of the dead, while the government of the SAR is doing everything possible to facilitate the lives of their relatives - the so-called “leader of the Syrian opposition” Ahmad Al-Jarba visited the United States.

Following a meeting with Jarba with US officials, State Department spokeswoman Marie Harf said that Washington would increase the aid to the “Syrian opposition” by 27 million dollars. In addition, the US authorities intend to declare the branches of the self-proclaimed “National Coalition of Syrian Revolutionary and Opposition Forces” official diplomatic missions of Syria.

In addition to the fact that such steps are in no way consistent with international law, they only increase the number of dead in Syria. After all, terrorists receive a blank check on the continuation of their bloody activities against the Syrian people.

Despite this, the UAR is preparing for presidential elections to be held on June 3. The chairman of the People’s Council, Muhammad Jihad Al-Lyahham, sent heads of parliaments of countries such as Russia, China, India, South Africa, Brazil, Venezuela, Cuba, Nicaragua, Bolivia, Ecuador and Armenia - a message urging them to call on Syria its observers for this election.

Ctrl Enter
Noticed oshЫbku Highlight text and press. Ctrl + Enter
We are
Iran in the Syrian conflict. The confrontation with Saudi Arabia and the interests of the ShiitesTurkey vs Syria: the balance of power
Military Reviewin Yandex News
Military Reviewin Google News
9 comments
Information
Dear reader, to leave comments on the publication, you must sign in.