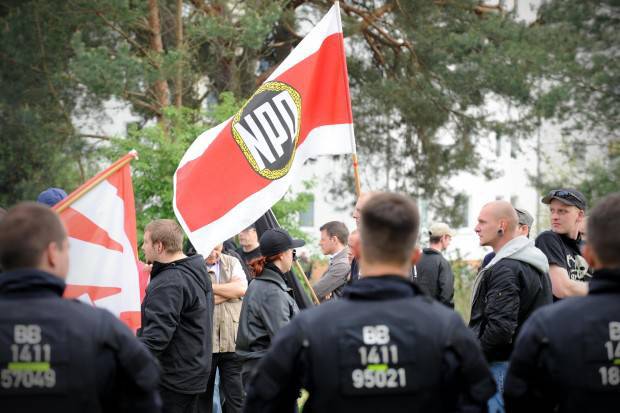 In the context of the Ukrainian conflict, the distinctions between the left and right radicals are erased. Putin’s ideology creates a common basis in their struggle against the EU and NATO.

George Orwell could not have come up with a more sinister picture. Putin’s propaganda justifies Russian aggression in Ukraine by the need to fight the “fascists” and anti-Semites. Russian Foreign Minister Sergei Lavrov recently even said that the EU, due to the growth of racism, must deal with this issue in the member countries of the union.

The Kremlin maintains the best possible relationship with Western European far-right forces. From the French "National Front" to the Belgian "Flemish Interest" and the Hungarian "Jobbik." The parties of the right spectrum are on Putin’s side.

The head of the Kremlin shows in the Ukrainian crisis how to effectively and carefully use the nationalist policy against the hated organisms - the US and the EU. At the same time, he acts as a defender of "Christian Europe" against the spread of Western immorality.

This alliance did not arise by mistake. Putin's conquest policy in the name of “reunification of the Russian lands” quite accurately follows the criteria of the neo-Eurasian ideology developed by the Russian national-Bolshevik Alexander Dugin.

She found inspiration in the ethno-nationalist ideas of the Western European New Right, one of the right-wing extremist schools of thought that emerged in the 70s, based on the traditions of the German “conservative revolution” in the Weimar Republic. Its representatives dreamed of a union between German nationalism and Bolshevism, which they interpreted as a popular movement against the aspirations of Western liberalism and universalism.

With the help of Putin's combination of Great Russian national nationalism and the re-created Soviet cult, the old dream of an alliance of left and right forces against the West seems to come true. For a long time, the West European right-wing radicals who were on the sidelines of political life seem to have a chance to gain strength on the path to the goal of Europe's renationalization. The National Democratic Party of Germany also wanted to jump on this train.

After the fall of the Yanukovych regime, the nationalist party Freedom entered the pro-Western parliament and behaves in a markedly friendly manner towards the EU. Hypocritically speaking of Ukraine’s national identity and independence, the National Democratic Party of Germany opposed Ukraine’s membership in the EU and especially in NATO, noting that “the spiritual and national revival of Europe is possible only on the basis of a strong Russian-German partnership”.

National Democrats unconditionally sided with Russian propaganda. They criticize the “criminals of the illegal Ukrainian government” and the “escalating strategy of the West” and try to use the fear of war prevalent in Germany by acting as the “2014 Peace Party”.

They want to join the new opposition ranks of Germany, claiming that for them there is no left or right world. In fact, their agitation against NATO’s military policy today is practically no different from the “left anti-imperialists,” whose loyalty to Moscow helped withstand the fall of Soviet communism.

Thanks to Putin's national-Bolshevik "double proposal", both "fascists" and "anti-fascists" can feel his authentic supporters. So, the left party, which designates itself as the cutting edge of the struggle against right-wing and right-wing populist parties, is not embarrassed that in the light of its relationship with Putin, she ended up in the same boat as the radicals. Although the leadership of the party and says that it does not support Putin himself. But the de facto party is in opposition to all attempts by the West to repulse the policy of annexing Russia.

Its goal remains the disintegration of the Western Union. Thus, the head of the Left Party, Katja Kipping, recently stated that the EU should assume the role of a free force from the bloc and free itself from the loyalty of its vassal towards the United States.

This prospect of new neutrality in the context of the Ukrainian crisis is becoming increasingly popular not only in the backyard, but also in the political center. Of course, it is not reliable. Those who understand Putin from the camp of democrats, whether national conservatives like Peter Gauweiler and Alexander Gauland or social democrats Erhard Eppler, are unlikely to be combined with extremist ideologues.

The myth of the Soviet anti-fascism

One should also pay attention to the fact that Putin not only pursues sober geopolitical goals, but also proposes a new ideological basis, which implies not only the introduction of Russian society to the dominant ideology, but also the involvement of anti-democratic forces of the West.

Russian propaganda cannot be blamed for the lack of ability to clothe authoritarian policies with supposedly good intentions. Putin used the anniversary of the end of the 1945 war (probably with the help of a triumphal performance in the Crimea) to show how the country overcame the barbarity of the National Socialists. In Russia, a law has recently entered into force that criminalizes Holocaust denial. This step of combating anti-Semitism could not have been welcomed if it were not for one “but”. The same law prohibits an incorrect interpretation of the role of the Soviet Union in World War II, thereby opening the door to suppress critical voices that cast doubt on the myth of Soviet anti-fascism.
Original publication: In Europa bilden sich üble Bündnisse für Putin

Ctrl Enter
Noticed oshЫbku Highlight text and press. Ctrl + Enter
We are
This is not “Putin’s Russia” - this is “Putin-Russia”Situational analysis of the death of the MH17 flight (Malaysian Boeing 777), made on the basis of engineering analysis from 15.08.2014
Military Reviewin Yandex News
Military Reviewin Google News
88 comments
Information
Dear reader, to leave comments on the publication, you must sign in.