Russia and the West: the present and the future 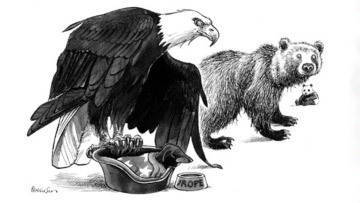 At present, Russia is faced with perhaps one of the most serious historical calls. This is because today, as never before, the question has arisen not only about the future fate of our state, but also about whether the Russian ethnos and Russian civilization as a whole will be able to survive. In fairness, it should be noted that in the history of our state, the question of its further existence has arisen more than once. This was also during the period of the Mongol-Tatar yoke, during the Time of Troubles, during the transformations of Peter I, during the Patriotic War of 1812, during the First World War, in the difficult years of the Great Patriotic War. Despite all the difficulties, our Fatherland, after all the severe trials, has always become even more tempered and even more united, thanks to the perseverance and strength of the Russian spirit. However, the situation that has developed today is more difficult and responsible than ever, because Russia has probably faced the most ambitious challenge from Western civilization in the person of the United States and its Western European allies.


It should be noted that relations between Russia and the United States almost always evolved far from the best. The only exception can be considered the period of the Great Patriotic War, when both countries along with Great Britain were members of the anti-Hitler coalition. However, with a more detailed consideration, it can be seen that even at this time each of the parties sought to solve their own geopolitical problems. Even before the start of the war, high-ranking American politicians and the military considered possible scenarios for the development of the situation on the European continent after the Nazi party led by Hitler came to power in Germany. They faced a peculiar dilemma, which looked like this: who would prefer at the beginning of the approaching war: the USSR or Germany? In the event of the outbreak of war by the USSR, the situation could have been such that after a certain period of time, Soviet troops could, crushing German troops, find themselves on the Atlantic coast of Europe, which would ultimately lead to a noticeable increase in the economic, political and ideological influence of the USSR . Therefore, it was decided to bet on Germany, thereby solving several issues at once: first, to solve their purely economic issues, by making substantial investments in the German military industry, second, to solve the ideological question and, third, to get additional profit in post-war economic recovery in Europe.

After the end of the Second World War, relations between Russia and the United States reached a new level, which consisted in a global confrontation: political, economic, ideological and military. The apogee of this confrontation can be considered with full confidence the Caribbean crisis, which put all of humanity on the brink of a nuclear catastrophe, which was avoided thanks to the manifested prudence on both sides.

The events that are unfolding around Ukraine today, which we are witnessing, can without exaggeration be considered a global clash of two civilizations: the Russian and the western. The entire logic of action by the US comes down to only one thing: to bring to the logical end the process of systematically destroying Russia as an independent and independent state, finally and irrevocably destroying Russian ethnos and Russian culture. All this takes on an important significance in the light of the sharply intensified struggle for energy resources, fertile lands and sources of drinking water.

Today's events are a bright continuation of the events of the 90s of the 20th century, when the United States and Western European countries felt that their plans were closer than ever to a logical conclusion, thanks to the weakness of the Russian leadership of that time.

It was Ukraine that became a kind of decisive battlefield for the whole future of Russian civilization. It was the current "authorities" in Kiev who became the very ram by which the US and Europe are trying to solve all their problems.

All events that are happening now can be called a “moment of truth” for our state and our people with a high degree of confidence. Will we, having rejected all contradictions and disagreements, unite as one people? Will the country's leadership and politicians of different ranks be able to forget about constant conflicts and their own short-term interests for the future of the country and the future of the people? Will our society be able to get rid of that dirt and other evil spirits that we have been carrying since the beginning of the 90s? Will we be able to get rid of the liberal evil and the "fifth column" in our society?

Ctrl Enter
Noticed oshЫbku Highlight text and press. Ctrl + Enter
We are
Russia and the West: the present and the futureWhat you didn't want to know about England
Military Reviewin Yandex News
Military Reviewin Google News
76 comments
Information
Dear reader, to leave comments on the publication, you must sign in.