Gas issue: prepayment instead of compromise 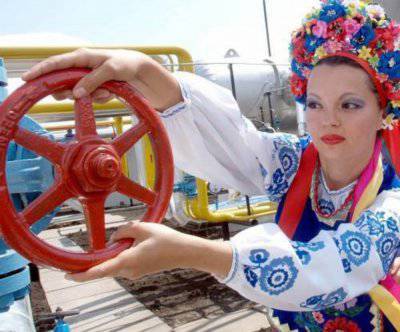 From June 1 Ukraine will be transferred to the prepayment mode for gas supplied by Russia. The introduction of prepayment is provided for by a contract between Gazprom and Naftogaz. Meanwhile, Ukrainian Minister of Fuel and Energy Y. Prodan said that the Ukrainian side does not intend to pay Gazprom for fuel supplies at 480 dollars per thousand cubic meters. 8 May at a briefing Prodan also said that Ukraine may apply to the arbitration court in order to revise the debt to Gazprom for the gas supplied.


The introduction of the advance payment mode for gas supplied to Ukraine by Russia was reported by the Russian Ministry of Energy with reference to Minister Alexander Novak, reports Interfax.

The deadline before which the Ukrainian side had to pay for the supplied gas, has expired on May 7, the ministry noted. At the same time, since March, 2014 of the year NAK Naftogaz of Ukraine has not received a single payment.

The total debt of Kiev for gas amounted to 3,508 billion.

Also, the message of the Ministry of Energy of the Russian Federation states that the transition to prepayment was provided for by p. 5.1.5 and 5.8 of the supply contract from 2009 between OAO Gazprom and NAK Naftogaz of Ukraine.

The preliminary bill for the June deliveries to Naftogaz will be put out by our Gazprom until May 16. It is noted that in June such a volume of gas will be delivered to Ukraine, which will be paid before 31 in May.

Novak said: “The Russian approach to the issue of support for the Ukrainian economy is set out in a letter from the President of the Russian Federation and that Russia can no longer and should not alone bear the burden of supporting the Ukrainian economy by giving it discounts on gas and forgiving its debts, actually paying with its subsidies, the deficit in the trade of Ukraine and the EU member states ”.

Interfax also reports that on May 7, Ukraine received the first tranche from the IMF (about $ 3,19 billion). Moreover, the stand-by-fund program for Ukraine just assumes that Naftogaz will acquire 2,16 billion from the National Bank and by the end of May pay off the overdue debt to Gazprom as of the end of March.

Nevertheless, the policy in Ukraine is still moving ahead of the economy. With the same success as a cart before a horse.

8 in May, the Minister of Fuel and Energy of Ukraine Yuriy Prodan said that Kiev does not intend to pay Gazprom for fuel supplies at a new increased price, reports "Lenta.ru".

"We can not pay in advance at the price of 480 dollars per cubic meter," - said Sold at the briefing. In addition, he said that Ukraine may apply to the arbitration court for the purpose of revising the debt to Gazprom for the gas supplied: “There is a pre-arbitration period. The letter that Gazprom sent to Naftogaz of Ukraine provided for the implementation of the relevant procedures, and there is also a complaint that it is possible, and our lawyers tell us, today to reconsider the corresponding debt, which was formed even on January 1 of 2014. ".

Sold also said that the amount of debt can be reduced in court, if Kiev goes to court. Russian gas for Ukraine is now worth 485 dollars per 1 thousand cubic meters. m, which is 20-25% more expensive than the average for Europe.

Thus, a simple conclusion suggests itself: Kiev is not going to use the money received from the IMF to pay off the debt to Gazprom. What is he going to spend it on? And how is this possible, if the funds are received for a specific program, and the Fund will try to control their expenditures?

Actually, Kiev, with its empty treasury and economic recession, has nothing to pay at all. And not only to Gazprom. That is, the money for the Russian gas industry can "come" only from funds issued by the IMF.

But this is just one question. The Russian side is also interested in the other: will Kiev steal that gas that Gazprom will pump for Europe?

First, as it turned out, Kiev decided to spend money from the IMF: a) to replenish the state’s foreign exchange reserves (about a billion); b) replenish the budget in order to stabilize the financial state of the country (the remaining part of the amount). At least, Stepan Kubiv, the head of the Ukrainian National Bank, reported on such plans. This person is apparently of little interest in the IMF target program. However, again, there is a loophole: in the IMF memorandum, notes Gazeta.ru, it is not specified from which particular tranche of the Fund money should be taken to pay debts for gas. But nevertheless, the IMF representative Gerard Vasha made it clear to Kiev that the fund provided Ukraine with enough funds to pay off the existing debt.

Therefore, Kiev will most likely turn to international arbitration. This forecast confirms the futility of the outcome of the negotiations, held in Warsaw, 2 May. (Speech on trilateral negotiations with the participation of representatives of Russia, Ukraine and the EU.)

Gazeta.ru quotes Sergei Agibalov, head of the economic department of the Institute of Energy and Finance:

“But if a compromise solution is not reached, the most negative scenario is possible. Ukraine may begin an unauthorized selection of Russian gas from transit volumes, which will lead to a worsening of relations. ”

But will mother Europe say something to this? After all, “transit volumes” are those intended for EU countries. The United States is not going to at all in the coming months and even years to overwhelm the EU market with cheap shale gas (however, its cheapness when delivered to Europe is generally questionable).

To whom, in the case of "weaning" of transit gas by Ukraine, will the EU show with a finger? To Kiev? Or maybe out of old habit to Moscow? They say they supply, so let them deal with the kidnappers?

Well, what if euro-nations start to freeze in autumn? Would they then agree with their pro-American rulers, pointing their fingers at Russians?