We are waiting for the referendum in the Donbass 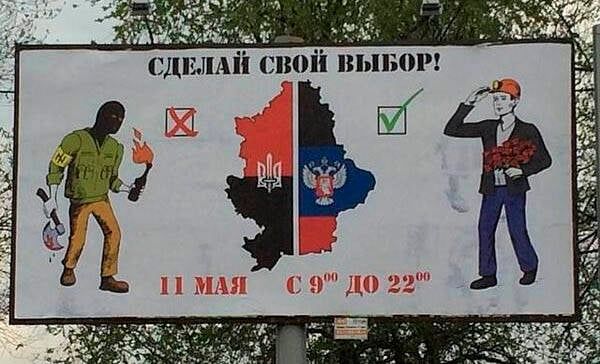 According to the results of the press conference given in Moscow by Russian President Vladimir Putin and Swiss President (part-time OSCE Chairman) Didier Burkhalter.

The reaction to the meeting turned out to be more than original.

People are dying. And yesterday they died. And today are dying. And tomorrow, probably, will be. Odessa civilians, residents and militias of Donbass.

Strange is another. It was the Donbass militia that responded more calmly to everyone. They quietly promised to consider the request of the Russian president to postpone the referendum. Ask the people. Against the background, howling “aaaaa !!! Putin passed all !!!! ". And they asked. The result is known to all.

Didier Burkhalter came to Moscow to Putin. It was not Putin who was called to the OSCE, or was invited there, but they came to Putin. Like a bow to the king-father.

But he did not heed too much, and did not relent. Moreover, during the press conference, Putin directly accused the “western partners” of the fact that it was they who brought their cookies and sacrifices to the tragedy in Odessa.

And when Russia, after Odessa, did not make a loud verbose protest, but on the contrary, it calmed down, the Europeans understood correctly and quickly.

They understand that when Putin is silent, defiantly doing his urgent business (working with the governors, visiting the Olympics, visiting the Paralympics, laying wreaths, underline it), then anything can be expected.

And here the main European on safety flies to Moscow to say “no”.

And ours doesn’t say neither yes nor no, makes a generous offer, realizing that it’s likely to be refused. But - does.

Oddly enough, Yatsenyuk did not understand anything: “I was a little surprised that the question of Ukraine without Ukraine, without the United States was discussed in Moscow.”
Yeah, especially without the USA. The USA is an integral part of Europe, right? And it is not necessary to look at the card, it is well known. Or is Europe already a regular US state?

But - insulting. "They married me without me."

Great demonstration of the relationship to the junta. And the fact that Burkhalter did not meow even is also an indicator. Indicator that Europe is not able to control the Kiev rulers.

And everyone who is at least a little able to work with brains, is waiting for a referendum.

With the referendum is also not all easy. According to reports from there, the authorities of many settlements in the Donbass, especially small ones, are actively sabotaging the referendum. But the organizers do everything to resolve this issue.

Postponing the referendum makes sense only under one condition: if the junta ceases hostilities. Any sane person knows what the negative answer will be. Hope that together with dollars from the EEC will send the brain is not worth it. Europeans have a clear shortage of this business.

And postpone the holding is not worth it. It may happen that there will be no one to hold it. It is clear that the junta rushes to the British flag in order to “roll out” dissenters BEFORE 11 in May. And Putin understood that perfectly. But made this offer. As a bone evrosobake threw. And all the smart people understood everything correctly. And fools - no pity.

Ctrl Enter
Noticed oshЫbku Highlight text and press. Ctrl + Enter
We are
Results of the week. “He was terribly unlucky, especially on Friday”Regime change in the Russian Federation? Why Washington wants to end Vladimir Putin (“Global Research”, Canada)
Military Reviewin Yandex News
Military Reviewin Google News
110 comments
Information
Dear reader, to leave comments on the publication, you must sign in.