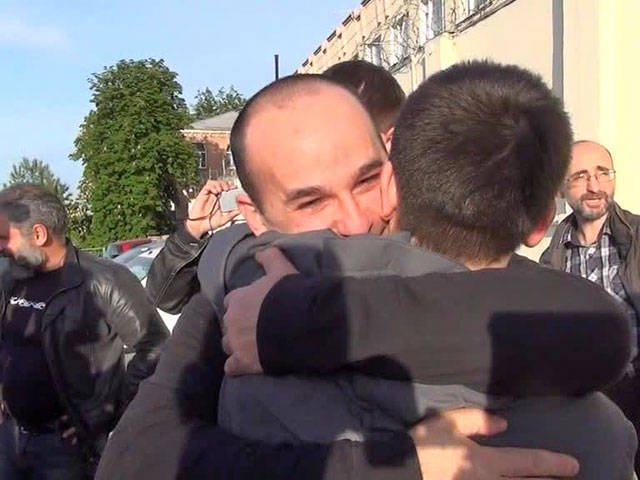 The leader of the Kharkiv anti-Maidan Konstantin Dolgov left the jail. According to his lawyer, Dolgov was released on bail in more than 360 thousand hryvnia. This is about 30 thousand dollars.
Initially, the amount of bail was almost twice as much, but the court lowered it. The money for the pledge was collected by the South-East movement headed by Oleg Tsarev. After his release, Konstantin Dolgov thanked all those who supported him, handed him products to the detention center and came to the courts.
Antimaydanovets said that his cell was always under protection, in the SIZO he was not allowed to communicate with cellmates. Dolgov declared that he would continue his struggle, and congratulated everyone on Victory Day. "If only everything was the way we want, as most of the Kharkiv people want it. I say hello to everyone and thank you all for your help and support. We will definitely win," he said.
After leaving the SIZO, Konstantin Dolgov, with a lawyer, went to the investigator, as he received a request to conduct investigative actions with him.
In addition, they have to release three more activists who were detained as a result of a special operation in Kharkov in early April, the Russia 24 television channel reported.
May 8 Ukrainian police detained on suspicion of organizing provocations in order to destabilize the situation of five people. The police came to them, investigating the fact of abuse of the flag of Ukraine 1 in May.
On May 1, they tried to burn two Ukrainian flags on Freedom Square opposite the building of the Kharkiv Regional State Administration.
Criminal proceedings were opened on part 1 of the 338 article of the Criminal Code of Ukraine (“Public abuse of the national flag of Ukraine”).
A 16-year-old Kharkiv woman suspected of attempting to burn the Ukrainian flag, as well as her friends, was detained. "Among her acquaintances, whom she even let live in her home, was found a citizen of Russia," - said in the department of public relations of the Main Directorate of the Ministry of Internal Affairs of Ukraine in Kharkiv region.