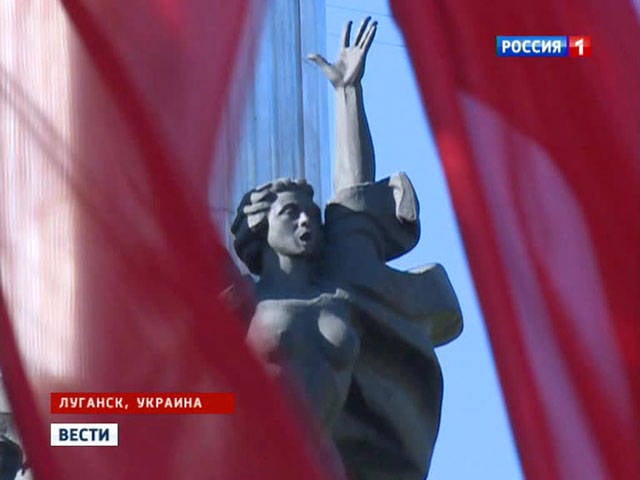 Southeast Ukraine is preparing for a referendum. Kiev rejected Moscow’s call to stop the violence and refused to stop the punitive operation. The decision of the South-East was something like this: if Kiev does not withdraw troops, then the referendum is not transferred. In Donetsk, outside the regional administration building, a rally was held, the participants of which called on all residents of Donbass 11 in May to come to the polling stations and express their opinion on the status of the region. The same was observed at the people's assembly in Lugansk.

People come to the buildings of the Security Service of Ukraine and the regional administration controlled by the militias with one question - “Will there be a referendum?”. News about Vladimir Putin's recommendation to postpone the vote to a later date, the most discussed in the southeast. And the Luhansk residents received answers to their questions less than a day after the statement of the Russian president.

"Folk communities decided: we will hold a referendum, as planned by 11 May," stated the press secretary of the Army of the Southeast, Vasily Nikitin.

On the eve, the command of the Army of the Southeast declared that they had no right to independently transfer the referendum. He was initiated by the people, and, therefore, the decision must take Luhansk. And he pushed Kiev to the decision, from where it sounded again statements that the operation against the southeast would continue, regardless of whether the referendum would be postponed or not. Against this background, the deputies only issued the will of the inhabitants of the region. Folk communities made a decision after talking with people all night.

In Donetsk, the decision on the fate of the referendum was waited no less. To spend it next weekend is even more difficult than in the Luhansk region. In Slavyansk and Mariupol, which are now, essentially, under blockade, it seems that they will have to vote under shelling. But to wait when the self-proclaimed Kiev authorities will lift the siege, you can endlessly, and people are ready to go to the ballot box under fire.

The decision not to postpone the referendum, the Lugansk and Donetsk self-defense activists adopted without saying a word. Too much effort was made by the inhabitants of these regions in order to make it clear to the self-proclaimed Kiev authorities that they would have to reckon with the opinion of the south-east. Today it is proved by those who took in hand weapon.

On Sunday, millions of people from all over the Donbas will have their say. “Today, the next BTR has gone over to the control of the republic,” Andrei Purgin said. “The residents instantly wrote the word“ referendum ”and set the flag of the Donetsk People’s Republic”.

The protégés of Euromaidan, to the south-east, are adding more and more military units from the radicals of all stripes and heavy armored vehicles. People are sure that Kiev is not exactly thinking about a compromise, and therefore the postponement of the date of the referendum can be perceived only as a weakness of the Donetsk Republic. And if so, then tomorrow the punitive detachments of the National Guard under will enter the houses of activists.

“Our referendum is done by ordinary people,” says Roman Lyagin, chairman of the Central Election Commission of the Donetsk People’s Republic. “In fact, we don’t pay for the work of the members of the district election commissions. But it’s organized by experienced specialists. The referendum must meet all European and world norms and standards. We are definitely going to this. "

What will happen after the referendum is impossible to predict. But residents of the southeast are confident: the vote will help protect their legal rights.