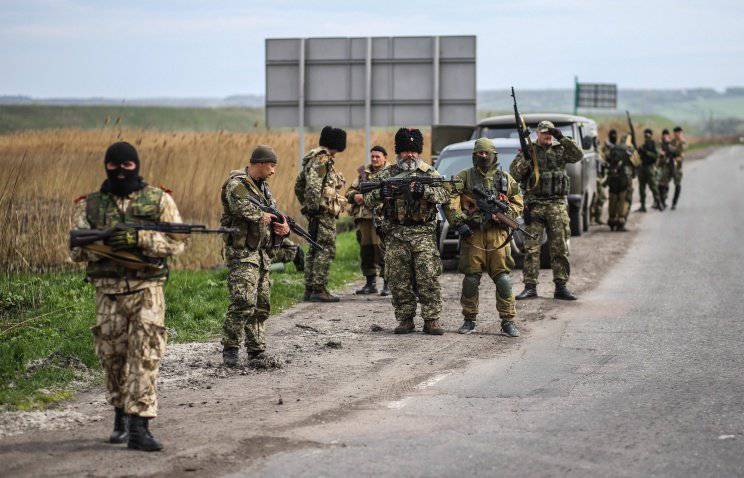 The current events in Slavyansk very much resemble the famous Battle of Thermopylae three hundred Spartans against the Persian army.

In the same way as in the battle at Thermopylae, the aggressor is many times greater than the number of defenders. Just like Fermopilskoe Gorge was a strategic passage on the way to Greece, which was difficult to get around, the city of Slavyansk is a strategic transport hub, which stands on the way to Donetsk and Lugansk. As long as the resistance in it is not suppressed, the main forces of the invaders cannot be advanced on Donetsk and Lugansk, since there is a great risk of getting a blow from the rear and leaving the troops without supplies. Just like the army of Tsar Leonid two and a half thousand years ago, the Slavyansk militia is faced with the task of delaying the advance of enemy troops in order to gain precious time for the formation of armies of the Donetsk and Lugansk republics, as well as for the May 11 referendum. Just as in the army of Tsar Leonid, in the Slavyansk people's militia, all as one experienced warriors, hardened in battles, all volunteers, and all the heroes, ready, like the 300 Spartans, to a glorious death. Just as the great strategist Leonid stood at the head of the Spartan army, the militia of Slavyansk is led by an experienced commander who can make a few militia an insurmountable line and knock off arrogance from self-confident commanders of countless enemy hordes. In the same way as in the Battle of Thermopylae, the enemy did not manage to take the line with a swoop, and he was forced to be drawn into a protracted opposition that was unprofitable for him, attacking from an unfavorable disposition, suffering casualties, which inevitably leads to a decrease in fighting spirit troops. As the Persian king Xerxes changed tactics, taking breaks between attacks, regrouping troops and throwing various units into battle, so did the junta’s commanders, throwing a large force of the regular army, then the National Guard into battle, sending army units to the rear, then special units in cooperation with punishers from the "Right Sector" and Western mercenaries. But all these detachments are forced to retreat, meeting the fierce resistance of the Slavyansk militia, just as the Persian detachments retreated under the crushing onslaught of Spartan warriors.

But there is one significant difference between the Battle of Thermopylae and the Battle of Slavyansk. It lies in the fact that the Spartans had no hope of victory, they knew that they were doomed, whereas the “Slavs” had chances to hold out until reinforcements arrived. These are small groups of volunteers who infiltrate into Slavyansk from other regions of the Donetsk and Lugansk republics, from the Crimea and from Russia. If they succeed in holding out until the formation of the army of the Donetsk Republic, then a turn may occur in the battle, and the transition to the offensive. Well, in the end, if the people speak out for independence, then the legitimized authorities of the Donetsk and Lugansk republics may ask Russia to enter peacekeeping contingents, just like Russia introduced them to Transnistria, South Ossetia and Abkhazia. Whatever happened in the future, but now, in the present, the Slavyansk militia are committing a military feat, no less great than the Spartans, defenders of the Crimea, the Brest Fortress, Moscow, Stalingrad and many other battles in stories humanity, when against the perfidious aggression, many times surpassing the hordes of the enemy stood up troops desperate brave men.

Ctrl Enter
Noticed oshЫbku Highlight text and press. Ctrl + Enter
We are
"Who are you," Shooter "?"About Stalin and Khrushchev
Military Reviewin Yandex News
Military Reviewin Google News
49 comments
Information
Dear reader, to leave comments on the publication, you must sign in.