12 May 2014
79
When the American reconnaissance aircraft SR-1998 Blackbird (Blackbird) made its last flight in 71, the United States Air Force lost one of its most high-tech aircraft ever built. In addition, the SR-71 was simply one of the most beautiful aircraft in the world. However, SR-71 will not be left without a successor. At the end of 2013, the information appeared that a new plane, which received the designation SR-72, would replace the “Blackbird”, which was developed by the division of the aircraft manufacturing corporation Lockheed Martin. It is reported that the main difference between the aircraft will be a completely new engine, which will combine the turbine and direct-flow jet propulsion. Thanks to this engine, the aircraft will be able to fly at a speed of about at 6 Mach, which is immediately 2 times the maximum speed of its predecessor.


One of the symbols of the cold war era Lockheed Martin SR-71 Blackbird can get a receiver in the next decade. It is reported that the new SR-72, capable of flying at twice the speed, will be able to fly without a pilot. After the US Air Force abandoned the "Blackbird", they showed a serious shortage of such machines. The SR-72 aircraft, which is being worked on by the design engineers of the Lockheed Skunk Works unit, must return to the Air Force reconnaissance flight at supersonic speeds. If the project is completed as planned, the aircraft will be able to fly at a speed of 6 times the speed of sound.

The spy plane SR-71 made its first flight back in 1964, the last time the car took to the air in 1998. All this time, the Blackbird remained the main reconnaissance aircraft of the US Air Force. The machine could be in the air for a long time at an altitude of about 24 kilometers, flying at supersonic speeds. When the SR-71 was retired, for some time the role of high-altitude observers was transferred to the orbital group. 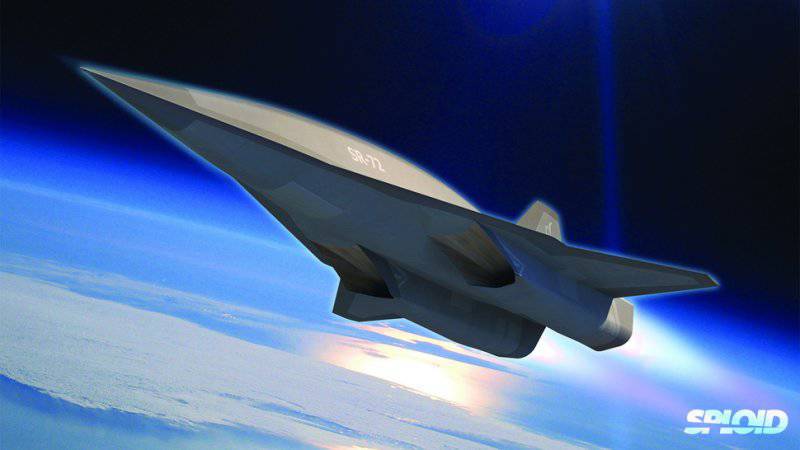 However, the use of reconnaissance satellites is not the most ideal of all possible solutions. Modern reconnaissance satellites are able to obtain very detailed photographs of various ground-based objects in high quality, but they require considerable time in order to retarget the device, transferring it to another orbit. For example, the movement of mobile missile systems more efficiently and reliably track with a hypersonic aircraft. Unlike satellites, the new SR-72 hypersonic reconnaissance aircraft, according to the developers, will be able to appear above the target so quickly that the likely adversary simply cannot respond to its appearance and hide from its equipment.

It is worth noting that even in 1990, the Blackbird set a record for flight speed. It flew from Los Angeles to Washington, in just over an hour, flying at Mach 3,3 speed. In order to fly at even greater speeds, the new SR-72 is planned to be equipped with a scramjet - a hypersonic ramjet engine that uses a special mixture of supercompressed air and fuel. Combustion of this mixture will allow the aircraft to fly at hypersonic speed or close to it.

But first we will have to overcome a number of technical difficulties associated with the project. Since super-compressed air is used in the scramjet, it is not suitable for flying at low speeds. In order to solve this problem, Lockheed designers are going to use the 2 engine immediately, equipped with a common air intake. The first of these is a completely ordinary jet engine, which will be used from the moment the plane takes off until the speed in Mach 3 takes off. Starting from this airspeed, the aircraft will switch to flying on the scramjet. 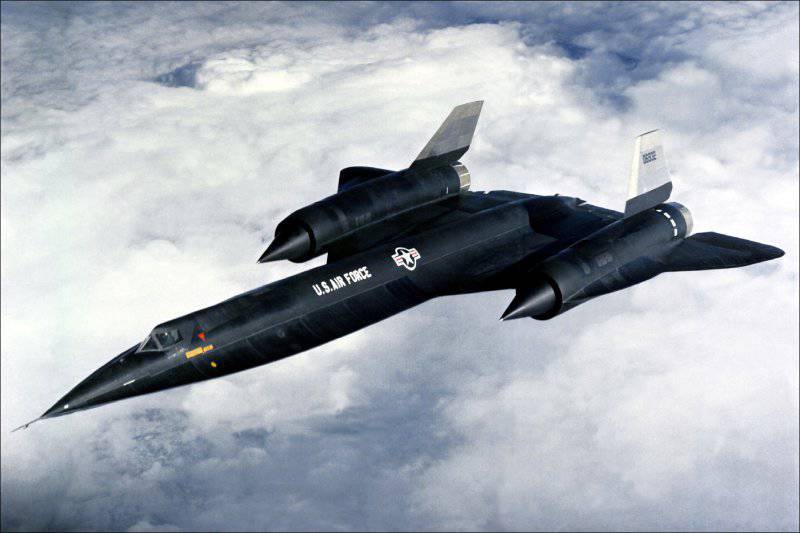 Lockheed Martin SR-71 Blackbird
However, the biggest difference from its predecessor will not be this, but that the SR-72 reconnaissance aircraft can be used without a pilot. Currently, the 2 version of the aircraft is being considered - unmanned and manned. At the same time, the aircraft will also be able to carry an offensive weapons complex. Reported that weaponwhich can be used from the SR-72, may be shown by Lockheed Martin in the 2018 year. This, mainly, is about new lightweight missiles, since when launched at 6 flight speed, Mach will not need accelerating and, therefore, heavier stuffing.

One of the tasks of the new hypersonic SR-72 aircraft will be not only to provide the United States with the necessary intelligence information, but also to increase the military power of the state. According to the head of Hypersonics program Bred Leland, hypersonic aircraft armed with hypersonic missiles will be able to penetrate into the airspace of a potential enemy and launch missile strikes in any part of the continent, having reached their destination in less than 1 hour. According to the expert, it is speed that should become the next key indicator in the whole world aviation new generation. Speed ​​will remain a priority over the next few decades. Leland believes that these technologies will be the same turning point, requiring a change in the "rules of the game", which at the time was the massive introduction of technology like "stealth".

According to Brad Leland, the SR-72 at 6 speed of flight Machs will be able to leave to potential opponents of the United States not only a minimum of time to carry out a response, but also to surprise them with high-performance indicators when using hypersonic missiles. Since their launch does not require a launch vehicle, the speed of such missiles will be able to exceed the speed of sound by 6 times, and the design of the missiles will be much easier. And not only in terms of weight, but also in terms of the very structure of the rocket. 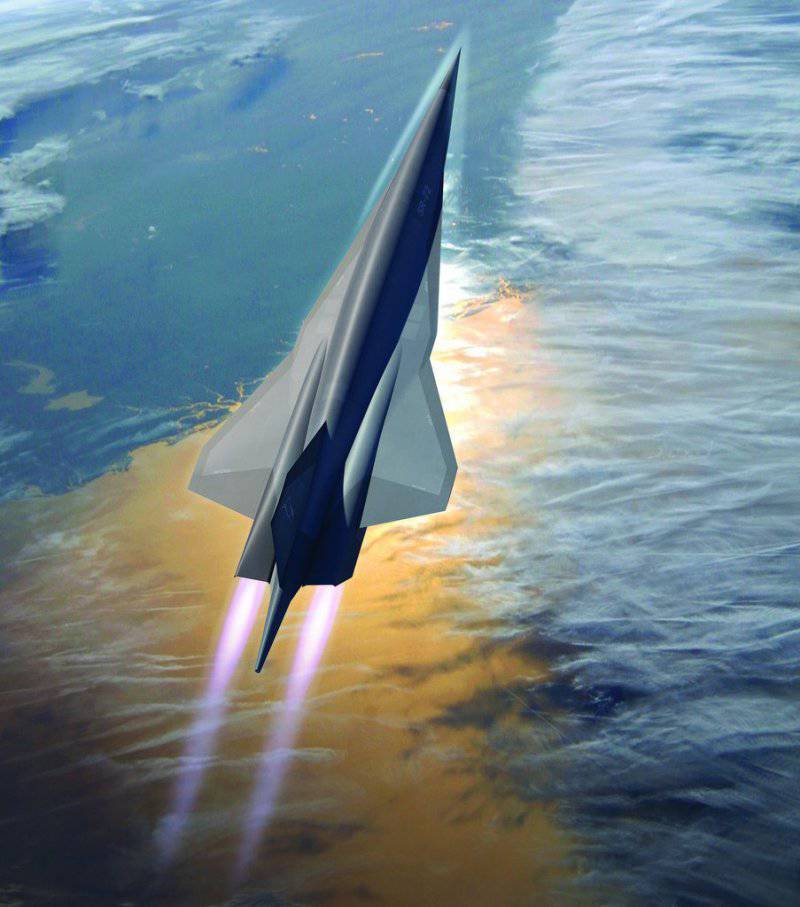 The heart of the new aircraft should be, as Lockheed calls it, a turbine based on a combined work cycle. It will combine the technology of the HTV-2 “hypersonic aircraft” engine, which could develop flight speed in 20 Mach (about 24 500 km / h) during the tests. It is reported that the SR-72 will get the 2 engine, each of which, in fact, will be double. Each engine will use a rather complex combined structure consisting of a nozzle and air intakes connected to two different power sources, which will make it possible to achieve a significant reduction in air drag. Lockheed and Aerojet Rocketdyne spent the entire 7 years working together to work out the design of future engines and their appearance. As part of the work on this project, the engineers of the two companies broke their heads many times over finding a suitable solution.

In an interview with the well-known Aviation Week weekly, Brad Leland explained that the cancellation of the Blackbird left a rather impressive gap in the development of satellite technologies (this is not hardware, but hardware), as well as subsonic unmanned and manned systems. Creating a new hypersonic aircraft SR-72 is designed to close this gap. The journal article states that one of the conditions for the creation of the SR-72 is to take into account the requirements of the US Department of Defense as part of its weapons development and research programs. These requirements largely dictate to Lockheed engineers various aspects of the project and its deadlines.

According to Leland, the construction of the SR-72 does not require the creation of fundamentally new technologies, so the flight of the demonstrator aircraft may occur by the 2018 year. In this case, the arrival of a multipurpose aircraft for service is scheduled for the 2030 year.