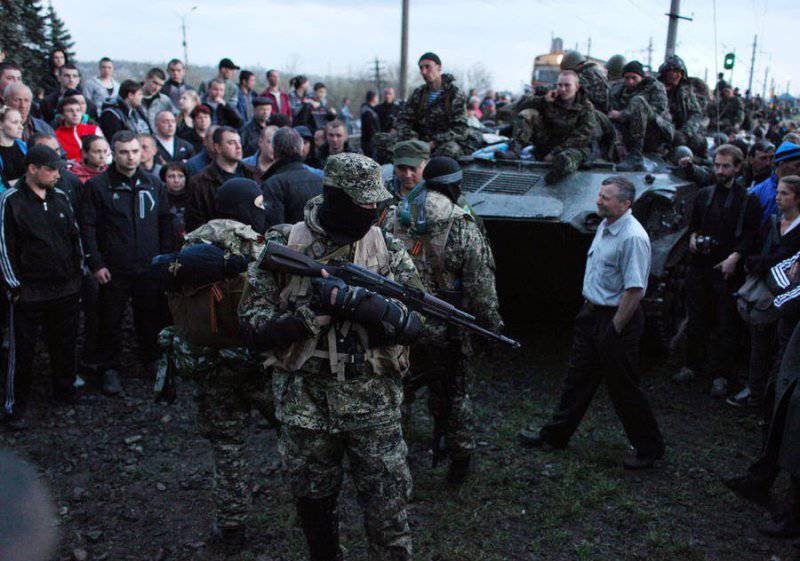 The city is still ours.

We are all practically without weapons. Most of the defencists who had weapons and who knew how to use them were in Slavyansk. Two groups remained, in the building of the Security Service of Ukraine and in the executive committee.

When the military entered the armored personnel carriers, the people turned them around. CSKA tried to take the SBU, with a swoop failed. But the army was not particularly eager to fight. There was a shootout, they immediately moved away. A hot meeting was prepared on the executive committee, but the military did not go there.

The fact that the National Guard did not go - lucky. Punisher would hardly have been able to wrap with his bare hands. But warriors still have a human.

Few weapons. No grenade launchers. The main part is well aware that if the punishers enter the city, we will get a second Odessa. There are residents who openly panic, but basically we all understand that there will be nowhere to retreat and have to fight what you have.

There are rumors about the Crimean battalions that are coming to us. We very much hope that they will have a weapon that they can give us.

After Odessa inside, something broke. It is understood that this will be a war to the end. But nothing has changed, we made our choice. We want to live under the tricolor, no matter under what - white-blue-red or black-blue-red. Just not under the two-color cloth. She is in the blood.

Privatbank refused to pay money in the Donetsk and Lugansk regions. The directors of the factories did a great job, they immediately began working through the ticket office. We 80% sitting on the privat.

Neither offices nor ATMs work. And pensioners in general all received retirement only through privat. By phone from the central office they offer to go to another area and shoot there. Checkpoints do not care about them.

In supermarkets and shops, everything is spread out. Almost no vegetables. Flour, sugar, salt disappeared. Pasta, cereals while there. Alcohol shaft, but at this time is not relevant.

No gasoline. Gas stations closed. Urban transport does not go. After the shooting events in general, no one wants to drive cars. Whether they take them away or shoot them.

Today, people who said that they were from a guard ran along the Kramatorsk and suburbs. Allegedly, in order to transfer pensions to another bank, they required a passport. And then they vomited. The people organized themselves and sat in ambushes. In the end, caught two. We passed them to the SBU, I think that later I will tell you what they are and how.

Information came from Slavyansk that blood is very much needed. There was a waiting list at the hospital. Will deliver through the field. Slavyansk tightly.

TV tower is disabled. All information is taken from the Internet and on satellites, who have.

Hope to help Russia is gradually extinguished. We understand that this is not the Crimea, Putin is unlikely to send troops here. But still hope.

Our reason is this: if Russia does not help, we will not care. It's a matter of time. Or in battle now, or under the knife of a banderlog afterwards. But we will not let burn and poison ourselves as in Odessa. It is better with a bottle on the armored personnel carrier. Or something else. But mercy is not worth waiting, it is clear to all. So let's hope for the best and keep the city.

We are not beasts that can be burned, poisoned and chopped with axes. This is exactly the beast does. We are Russians.

Ctrl Enter
Noticed oshЫbku Highlight text and press. Ctrl + Enter
We are
Reports from the militia of New Russia for 1 September 2014 of the year
Military Reviewin Yandex News
Military Reviewin Google News
129 comments
Information
Dear reader, to leave comments on the publication, you must sign in.