116 man burned alive by the Nazis in Odessa 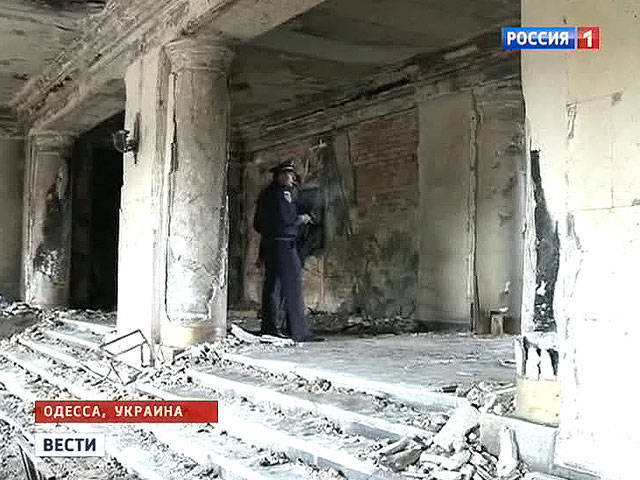 There was information that the victims of the Odessa Khatyn - the so-called tragedy of the second of May in the House of Trade Unions - were at least 116 people. Who was burned alive, who suffocated in the poisonous smoke, who crashed, jumping out of the windows of a burning building, who was fatally wounded in the head. Today was the first funeral.
While Odessa mourns the dead, the head of the SBU Nalyvaichenko demands to suppress the protests of supporters of federalization for several days, and the head of the Interior Ministry Avakov directs the special purpose battalion "Kiev-1" to "help Odessa in these difficult days." The story of the most terrible days since the Nazi occupation.
"The Germans probably did not do that. Does he have a mother, does he have a mother ???" - the woman inside the burned-out House of trade unions is indignant.
And mothers, brothers, relatives of those who did not get out of the House of Trade Unions, wander through its black corridors with soot. They are looking for nothing, even fragments of clothes are left. What is not burned, then carried out. Just looking to remember what hell their loved ones died in.
Odessa today buries those who burst into the air and still did not survive. Batons and bars were given very few people a chance. In the obituary of Vyacheslav Markin, a deputy of the regional council, they will write: “on May 2, he was beaten to death in the Kulikovo Field”.
He is escorted by people whom Kiev calls separatists, but more often - Colorado beetles, and what conversations with them? They stand only flame. And the one whom this flame does not kill, who does not break, jumping out of the windows, who does not run out under the punitive batons, let him suffocate from the poisonous fumes. The vials that were thrown through the windows along with Molotov cocktails are still found in the House of Trade Unions.
"There was some kind of gas from which it was simply impossible to breathe. That is, the airways were clogged up to such an extent that people just fainted. It was not carbon monoxide that was felt - it really was some kind of choking. Or smoked, or wanted so we suffocated and burned, "says one of the few survivors named Yuri.
Doctors understand the origin of gas easier. They say - many died without receiving any skin burns, their lungs burned.
Listening to people's testimonies is almost impossible. To understand how this is possible in the city-hero Odessa is even more difficult. But these are the stories of survivors. What felt those who could not, never know.
“We were thrown to the floor, all the men, they said:“ Everyone to lie down! ”They started beating on the head and bats on the back with bats. We simply did not know what to do. Then we were taken to the corridor to the fire escape and through the reverse. we were thrown into a puddle, and in the puddle of us the militants of the Right Sector continued to beat us with bits, one of the miraculously survivors who lies in an overcrowded ward reports in detail.
In Odessa, do not believe the official figures, according to which the death toll is forty-six. The corpses began to recount those who killed. Who, besides them, could then fall on the ashes. We counted how the notches on the butts were set.
The bodies were removed. The smoke disappeared - drafts walk along the floors of the House of Trade Unions. Where each step has become a gravestone.
Arseniy Yatsenyuk did not come here. Not with flowers, or just keep quiet. He came to Odessa to change the leadership of the local Ministry of Internal Affairs, whose twenty employees are also in hospitals now.
Check the loyalty of the new chief evromaydanovtsy moved closer to the night. Another march through the streets of the quiet city. Not less than a thousand militants from the Right Sector have already arrived in Odessa from Dnepropetrovsk. Apparently, in order to help them in the city, a new armed formation is now being created - quite officially. The task is to ensure order in the city. But for him this is unlikely to be considered a riot. From the Ministry of Internal Affairs the radicals went to the empty Kulikovo Field. And celebrated the victory. Hoisted on the flowers and icons on the ashes of the Ukrainian flag, and the one that tore, burned.
The fire of the second of May was probably not enough. Will the funeral of a city by the sea, which gets used to live from a dirge to a dirge.