14 May 2014
12
For several weeks, the Pentagon and Raytheon signed another contract for the work. In accordance with the new document, specialists at Raytheon must continue to work on several types of guided weapons. One of the clauses of the contract is the ultra-small aviation Pyros bomb. The successful completion of this project will open the way for other ultra-small bombs currently under development. Small bombs of small caliber are offered as weapons for unmanned aerial vehicles of the light and middle class. It is argued that ultra-small guided bombs will allow the UAV to effectively carry out the tasks of destroying small targets, such as manpower or unprotected enemy equipment. Consider some ammunition in this class.

One of the first developments of the new class was the Pyros bomb, the refinement of which is carried out within the framework of a recently signed contract. In the early stages, the project was called STM (Small Tactical Munition - “Small Tactical Ammunition”). The initiator of the development of the STM / Pyros bomb was the United States Marine Corps. The command of the International Maritime Commission considered that in the current situation with the active development of unmanned aircraft, the units needed appropriate ammunition. An opinion emerged that light and medium-sized UAVs should not only carry out reconnaissance missions, but also be able to strike at ground targets. Weapons for such attacks should have been a promising STM bomb, the development of which began in the first half of the two thousandth. 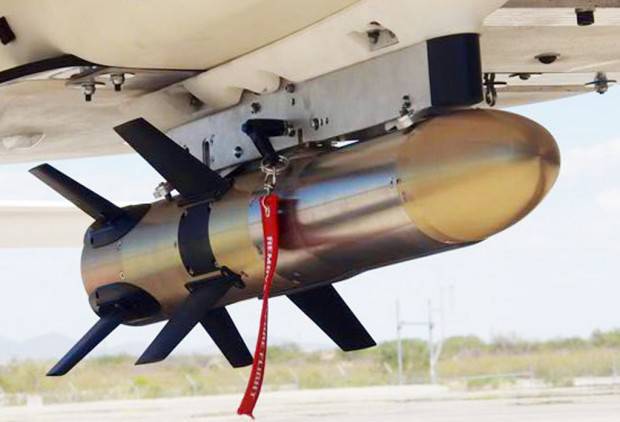 The STM bomb carrier was supposed to be a AAI RQ-7 Shadow 200 UAV or other devices with similar characteristics. The capabilities of the RQ-7 drone (first of all, the payload capacity - 45 kg) affected the bomb requirements for it. The maximum ammunition weight should not exceed 6-7 kg, and the maximum length was limited to 2 feet (about 60 cm). In such dimensions it was required to enter the warhead with the greatest possible power, as well as a guidance system capable of ensuring high accuracy of the impact and thereby compensating for the low weight of the warhead.

In the fall of 2010, Raytheon's specialists conducted the first tests of the STM Phase I bomb. The ammunition had a total length of 56 cm and weighed about 5,4 kg. All units of the bomb were installed in a cylindrical housing with a head fairing. The hull had X-shaped wings and four stabilizers. Bomb STM first version equipped with a combined guidance system. For the initial aiming at the target, the ammunition had to use a satellite navigation system, and the hitting directly at the target was provided by a semi-active laser homing head.

Several test dumps of the STM Phase I bomb from unmanned aerial vehicles showed the viability of the concept, and also confirmed the correctness of the proposed technical solutions. In this case, the tests revealed some minuses of ammunition. According to the test results, the perspective ultra-small bombs were completed. The updated ammunition received the designation STM Phase II. All changes concerned the used equipment. Major adjustments to the design were not made.

To date, the STM bomb has undergone several modifications and changed its designation: now it is called Pyros. The overall structure of the bomb and the dimensions remained the same, but it became heavier to 5,9 kg. The ammunition carries a 7-lb (3,2 kg) high-explosive fragmentation warhead. It is known about the work on the creation of a warhead weighing 5 pounds (2,3 kg) of a new design with higher characteristics.

In the middle of 2012, Raytheon claimed that the Pyros project was “on the final stretch” and would soon be ready for delivery to the troops. At about the same time, there appeared a proposal on the possible expansion of the list of drones-carriers of ultra-low bombs. In addition to light or medium-sized UAVs, it can carry heavy class vehicles. In this case, instead of a single AGM-114 Hellfire missile, the RQ-1 Predator or MQ-9 Reaper drone will be able to take Pyros to the 7-8 bombs, which should have an impact on its combat capabilities.

Seeing the success of a competitor, Lockheed Martin decided, on an initiative, to create its own ultra-small bomb project for arming unmanned aerial vehicles. The first test dump of the Shadow Hawk bomb took place at the end of March 2012. Like Raytheon’s development, Lockheed Martin’s super-small bomb is designed to arm light and medium UAVs that can attack various unprotected targets. The Shadow Hawk project can be considered an attempt by Lockheed Martin to get its place in the emerging market of promising ultra-small ammunition. 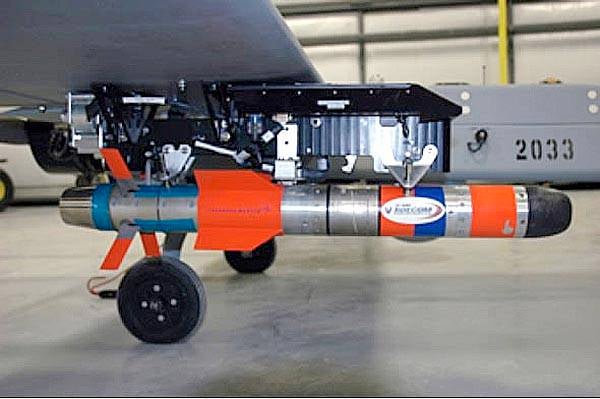 The super small bomb Shadow Hawk weighs only 5 kg. The total length of the ammunition 69 cm, diameter of the body 7 cm. In the middle part of the body, with a shift to the tail are X-shaped wings of small elongation. On the surface of the tail there are steering wheels. The semi-active laser homing head and control equipment are located at the head of the munition. After analyzing the features of ultra-small bombs, experts from Lockheed Martin came to the conclusion that only a laser guidance system could be used without any additional equipment.

The AAI RQ-2012 Shadow 7 UAV was used as a test platform in the spring of the 200 of the year. Laser target designation for the bomb was carried out from the ground. During the first test, a bomb was dropped at an altitude of 1545 meters. The automatics of the Shadow Hawk bomb successfully detected the laser-illuminated target and hit it. According to reports, the ammunition dropped on the target at a speed of about 500 km / h and deviated from the point indicated by the laser, only 8 inches (about 20 cm). The stated circular deviation, depending on the characteristics of the discharge, does not exceed the 1 meter.

Over the past two years, Lockheed Martin specialists conducted several more tests of their prospective ultra-low bombs. In addition, the company is actively working to promote its development in the armed forces of the United States and other countries. The promotional materials for the Shadow Hawk project feature the same arguments as in the case of the Raytheon Pyros bomb. It is argued that the new bomb will allow light and medium-sized UAVs to solve not only reconnaissance, but also shock tasks, which will simplify and cheapen the implementation of a wide range of missions.

In 2012, the American company Alliant Techsystems (ATK) published the first information about its new ultra-small bomb project called Hatchet. Like Lockheed Martin, ATK took up an urgent problem and also decided to join the competition for future contracts. At the same time, ATK experts decided to interest potential customers in the original appearance of a promising ammunition. The authors of the project Hatcher headed for reducing the size and weight of the bomb. The aim of the project was to create an ultra-small bombs that could be used as weapons for light UAVs. 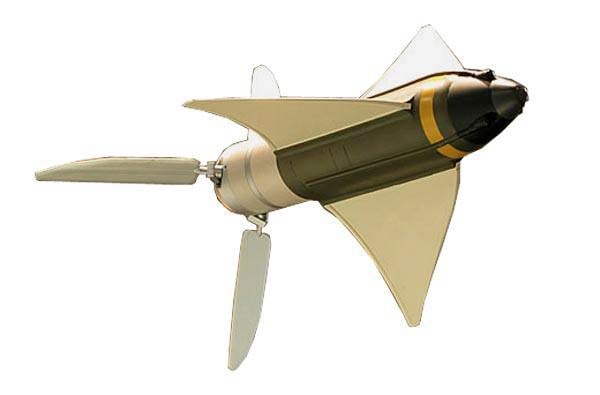 The authors of the project Hatchet promised to make the smallest bomb in its class: its caliber should not exceed 7 pounds (about 3,2 kg). With such a weight, a super-small bomb could be used by various light drones with a small payload. According to the published figures, the Hatchet bomb should have an interesting aerodynamic appearance. On the case of diameters of about 60 mm it was proposed to mount three folding wings of a triangular shape. In the tail of the bomb, there are three large elongation booster. According to some reports, the wings of a Hatchet bomb can be made of polymer film. For suspension under the wing or fuselage of a UAV, the bomb must be placed in a special container.

Like other developments of its class, the ATK Hatchet bomb was supposed to carry a light high-explosive fragmentation warhead, the power of which would be enough only to defeat manpower and unprotected enemy equipment. It is known about the development of two variants of the guidance system for a new bomb. One of them must control the ammunition using signals from the GPS satellite navigation system, the other - combined, using satellite navigation and a semi-active laser homing head. This should provide greater flexibility in the use of weapons: depending on the task to be performed, ammunition with the most suitable guidance system can be used.

Last September, representatives of Alliant Techsystems told about the current status of the Hatchet project. It was alleged that the design work had already been completed and the new ultra-small bomb was being prepared for tests. Tests of various elements of the bomb were planned to begin before the end of 2013. Full-scale trials of a drone-discharged munition are scheduled for 2014 year.

The future of ultra-small bombs

At the moment, none of the ultra-small bombs designed for use on unmanned aerial vehicles, not adopted for service. However, some munitions of this class are already being tested. In addition, there are new projects of similar systems. Over the next few years, the US Marine Corps should announce its decision on the future of the STM / Pyros bomb it ordered. The decision of the American commanders can have a great impact on the future of all such projects, since the adoption of the Pyros bomb will show real prospects for weapons of this class.

It is likely that the Pyros bomb will be adopted by the ILC, and in the future the same will happen with several other types of weapons of this class. Unmanned aerial vehicles are becoming more common, and this trend will continue in the foreseeable future. Now light UAVs can not perform shock tasks, because they do not have weapons with acceptable characteristics. Ultra-small bombs like Pyros or Shadow Hawk should be the answer. Existing trends in the development of unmanned aircraft in the very near future may lead to the emergence of new ultra-small guided bombs.