Syrian May in the smoke 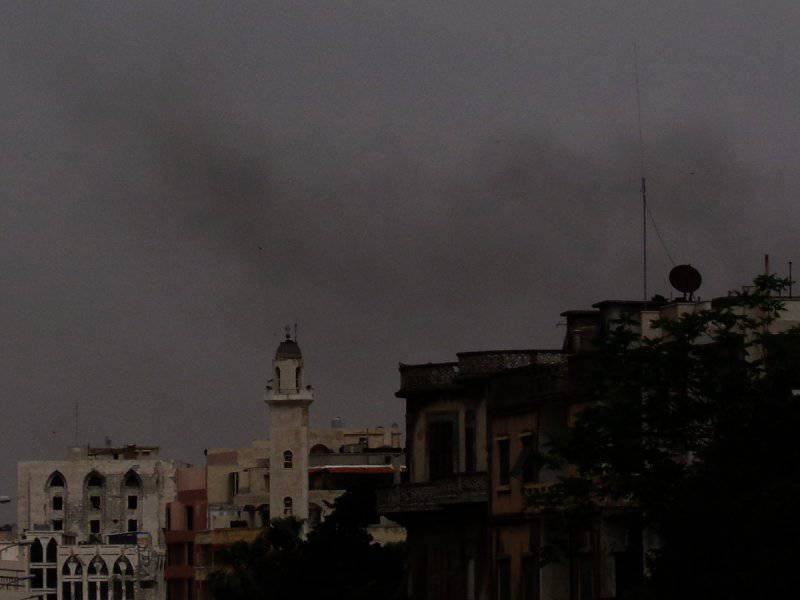 1 May in Syria celebrated the International Day of Solidarity of Workers. A rally was organized in Damascus, organized by the General Federation of Workers' Unions. Hilil Hilal, Deputy Regional Secretary of the Arab Socialist Renaissance Party (PASV), spoke at the event, saying that the workers and peasants of Syria are showing unprecedented stamina in resisting the international plot. It is they who will create a new Syria. Hilal also stressed that the workers suffered a lot of losses during the terrorist war, huge damage was also inflicted on industry. In particular, he recalled, in the province of Aleppo, gangsters looted thousands of factories and plants, sending their equipment for sale in Turkey.

Another solemn rally in Damascus on the occasion of 1 May was organized on the territory of the Faculty of Dentistry of Damascus University. Rector of the University Muhammad Al-Mardini, congratulating the workers on the holiday, welcomed the imminent holding of presidential elections, describing the campaign that had begun as “a manifestation of a new democratic process”.

Participants in mass events strongly condemned terrorism rampant in the country. And indeed, the holiday was overshadowed by new terrorist attacks and shelling.

In May Day itself, one of the mortar shells fired by bandits and trapped in the Tijar area led to the death of one person. In the Kanavat area, terrorists fired at the Al-Sa'ada school - two teachers were injured. Three shells hit the Abbassiin area. The supermarket next to it caught fire, several people suffered. In the province of Damascus, in the city of Jaramana, one child died as a result of a similar crime of the “opposition”. Another 22 man were injured. In all cases, caused great material damage.
In the province of Homs in the city of Tadmor, terrorists attempted to sabotage a gas pipeline. Fortunately, the army managed to prevent crime.

3 May near the Somaria bus station in the province of Damascus, the army figured out a mined car. Sappers were urgently called in to demine it. Unfortunately, when the sappers tried to neutralize the car, the terrorists blew it up using a remote control. Sappers died. Some civilians suffered.

In the metropolitan quarter Duel was released gangster shell, caught in a minibus. Four passengers died, among them - a girl 16-years. Four more Syrians were injured.

In Aleppo, a shell hit the building of the University’s Faculty of Economics. 22 student suffered. The terrorists also attacked the hospital in Aleppo, as well as the Planet Hotel. 12 people died, 16 received injuries of varying severity.

4 May in Damascus shell fired by gangs, exploded near the hospital "Abbassiin." Killed girl 5 years. Another shell hit the church of St. Mary. Damage to the building, as well as neighboring houses.

One person died on the freeway between the cities of Homs and Salamia. A mined car was blown up on the track. Two more were injured.
In Aleppo, two local residents were killed and five were also wounded as a result of a mortar attack on the Al-Aziziyah quarter.

Despite all the terrible crimes of the terrorists, who stepped up their black activities on the eve of the new presidential elections, the “world community” continues to make statements in support of these same terrorists, calling them “the opposition”.

The Syrian Foreign Ministry sent special messages to the UN, stating that support for outside armed groups helps to increase the number of crimes against civilians.

“Systematic terrorist attacks on civilians would not have been exacerbated if there had not been huge financial, military, logistical and political support from some countries in the region and the West. This support pushes terrorist groups to flout all moral restrictions and laws and instills in them that they will be able to avoid responsibility under the conditions of double standards that some countries apply to the fight against terrorism, ”the foreign ministry said. The SAR Ministry of Foreign Affairs also pointed out that “terrorism, which continues to torment Syria, has recently reached an unprecedented scale. Terrorists deliberately target their attacks on residential neighborhoods, schools, hospitals, infrastructure, Islamic and Christian holy places, which led to the deaths of hundreds of civilians, most of whom are children and women. This is intended to intimidate the Syrians. ” “Systematic armed attacks on civilians would not be exacerbated if there were no financial, military, logistical and political support for gangs from some countries.

However, Ban Ki-moon showed the most real hypocrisy and criminal irresponsibility, trying to again push unfair accusations against the Syrian leadership.

On the television channel Al-Arabiya, the UN secretary-general said that he "stopped talking to President Bashar Al-Assad," arguing that the latter allegedly "does not fulfill its promises."

The reality is that the leadership of the SAR, led by Bashar Al-Assad, throughout the crisis, fulfilled all its promises and obligations. The country is in the process of reform, Syria is preparing for presidential elections, and the process of utilization of chemical weapons. As for the so-called “opposition,” it’s not that they do not demand the fulfillment of any promises - they don’t even require the promises themselves.
Meanwhile, the election campaign continues in the country. 1 may have expired on the deadline for accepting applications from presidential candidates. According to the results of voting in the National Council, three candidates were approved. They are incumbent President Bashar al-Assad, as well as Maher Abdel-Hafiz Hajar and Hassan Abdullah An-Nuri. As for those candidates who did not receive the green light from the parliament, they have the right to appeal within three days.

In every way wishing to thwart the holding of elections, some forces in the UN Security Council are trying once again to prepare an anti-Syrian resolution based on Chapter 7 of the UN Charter, which implies the use of force. As the Permanent Representative of the Russian Federation to the UN, Vitaly Churkin, said at the end of a closed meeting of the Security Council: 2 They say they will prepare a resolution on Chapter Seven of the UN Charter. ” Churkin described the steps to prepare such a resolution as an untimely step. "Our position is that it is necessary to convene the third session of the Geneva talks and engage in a deliberately political settlement," the diplomat said.

It should be expected that Russia and China will once again veto a similar draft resolution. Therefore, an attempt to develop this document and put it to the vote is part of the information war of the West. Knowing that such a resolution will not pass, the West still continues its attempts, firstly, to morally support the terrorists, and secondly, to once again spit in the direction of the Russian Federation.

And it is not known to these forces that they support terrorists who are doing absolutely terrible things. In the city of Racca, Islamists executed seven Christians. Of these, a barbaric execution was inflicted on two of them — they were crucified.

The bandits from the Islamic State of Iraq and the Levant themselves declared that on April 29 they executed seven prisoners, two of them with a crucifixion. One of them was blinded before the massacre ...

However, the West has been blinded for a long time - it does not want to notice the obvious ...

Ctrl Enter
Noticed oshЫbku Highlight text and press. Ctrl + Enter
We are
Bashar al-Assad: In Syria, not the “revolution” that the enemies are talking about, but the revolution of the army and the people against terroristsSyria: a heroic past and a stormy present
Military Reviewin Yandex News
Military Reviewin Google News
83 comments
Information
Dear reader, to leave comments on the publication, you must sign in.