Why I do not want to fight with the Ukrainians

10 May 2014
151
Judging by some comments on yesterday’s article, I found myself in the ranks of the traitors to the Russian world and even enemies of compatriots. Degraded, so to speak, with age. In the USSR, it seemed to be normal, but now ... Attempting to clarify the position with the help of answers to questions failed, as I believe, simply because with such discussions people read only what they want. And, accordingly, do not read what is against their point of view. Of course, it flattered me that they cited me as Vladimir Ilyich (I remembered the famous poster in all educational institutions of the USSR: “Learn, learn and study again”), but the situation is too serious not to answer.


Having rummaged at one time in my pedigree (there was such an opportunity), I found out that my blood was purely Russian. Right perfectly Russian. There are Russians, Belarussians, Poles, and Cossacks (and this in itself is an explosive mixture), Prussians, and even Gypsies ... However, this did not prevent me from considering myself a Russian, to become an officer, to live in my beloved, although long-suffering country.

Now, as, probably, everywhere, conversations about the situation in Ukraine have already reached the level of shops at the approaches. The interest is huge. And the recipes for solving the problem are vast. But the main question is: do I need to send troops to Ukraine, do I need to defend the Russians (I hate the word Russian-speaking), do I have to give the junta an armored fist on a blatant face?

My answer is no! By no means should we now go on about the junta and its masters. Why? I will try to give only a few reasons.

For several months, the US and the EU in all international forums have openly said that Russia is fighting in the territory of Ukraine. What Russian special forces oppose Ukrainian security forces. Ukrainian and US-European media are replete with reports of the seizure of Russian saboteurs. However, to present in reality they have nothing. Words words words. But the campaign continues! And, on the contrary, events are not in favor of the junta, or they are completely silenced, or they are treated completely falsely. Read, as they say about the events in Odessa.

Further. They blame me for not supporting the rebels. What kind of rebels? According to reports of the rebels, repeatedly voiced personally by the resistance commander, the number of Donetsk army 2500 people. The remaining civilians. That is, those who seem to support it. And what is the population of the South-East of Ukraine? Right. 15000000 approximately. At least thousands of 400 of them are capable men. 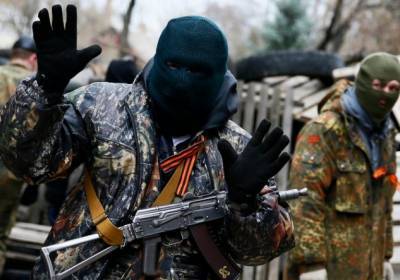 Often talk about the Crimean version. And what is the similarity? Only that both territories belonged to Ukraine. Otherwise what? .. The rebels are fighting against the junta, but no more. And most do not want to become Russians. There is some part, but not the majority. It will be possible to speak about the majority or minority only after the referendum. And what question is submitted to a referendum? Is there anything at all about entering? Not.

But the most interesting is the ATO. Sorry, but as an officer I can say - this is not the ATO, this is a circus. The game of cat and mouse, not a serious operation. Armored vehicles, helicopters, 15000 any soldiers can not take a small unimportant town? Checkpoints with concrete blocks and heads of hunters sticking out between them are, of course, a very strong reference point for large-caliber BTR machine guns and BMD-2 automatic cannons.

ATO should be called the word that reflects the essence much better - punitive operation, the purpose of which is to intimidate the population and prevent the referendum from being held. And its active phase will be held on the night from 8 to May 9 ... And until this moment we will read about the same morning news from the front: at night, the Ukrainians attacked several roadblocks, the rebels retreated in an organized manner, lit tires. On both sides there are dead and wounded. Detachments of the “Right Sector” broke into city X (enter the name yourself). But with the onset of morning, the rebels managed to squeeze the Ukrainians out of the city and free their posts. Now there is a recovery ...

Moreover, even now it is impossible to talk about real clashes. They attacked, shot, someone retreated, someone stepped on. Losses on all 4-5 people killed and wounded. The main losses are and will be among unarmed civilians. And the losses will be such as to cause not only fear, but also horror before the Ukrainians. Like, for example, the death of this nurse and her comrades.

So why should we save as much as possible the army in inaction? The main thing is that the number of corpses in Ukraine has already passed into quality. The very quality that, after promulgation in the same Europe or America, will cause a shock to the people, more precisely, to the voters. And the election is on the nose. See the main versions of Odessa events. Three citizens of Russia organized riots, and supporters of federalism for some reason engaged in self-immolation and jumping out of windows. And this is a seriously considered version. And those arrested today will be taken to Kiev and will be kept in prison. Those who were released while lucky. But I'm sure the Pravosek activists already have lists.

But more importantly, Ukraine is a sovereign state. A state populated by Ukrainian citizens, not Ukrainians, Russians, Jews, Armenians, Greeks, and many more nationalities. It is citizens who must choose and decide who they are, or what they are. And no matter what the politicians say, ultimately it will be the way the citizens decide. NATO, USA, Russia, Martians or someone else can achieve their goals for a certain period, but in the future it will be so.

There is another nuance. In my opinion, quite important. About which everyone is somehow silent. Junta is very important to hold the election of 25 May. Anyway. And in this situation it is problematic to hold them. DNR will do everything so that they are not. So, more than 30 percent of the population will not elect a president. But there is a great option. The one that passed with the Crimea. It's a pity, of course, the territory, but there is something to butt with Russia. But the chances of pro-Western candidates increased. It is clear that Crimeans would not have voted for Tymoshenko or Poroshenko. And the occupation of the territory of Russia makes the elections legitimate. The fact that the Donbass did not vote, Russia will be to blame.

Well, in the end I will say: 17 is nearing May. This is exactly the time that Putin gave Ukraine to pay off his debts. This will not happen anyway. This means that the cranes will be closed, gas will be supplied only for transit. And that means that Ukraine will start stealing gas from this amount already. Sanctions start to play in the opposite direction. Europeans can count their money and their gas.

Junta just suffocate. The economic situation will be simply disastrous. The owners of the money will not give. Again there will be promises. And it is from here that the tasks of the Russian Federation for the near future follow. They are simple. Breaking the information blockade in Europe and America, leading a reasoned struggle, primarily with the United States at the diplomatic level, and most importantly, through public organizations, through all possible channels to provide humanitarian assistance to the insurgent regions. The people should eat, drink, breathe ... And it is better if they do it with gratitude to the Russians.

Ctrl Enter
Noticed oshЫbku Highlight text and press. Ctrl + Enter
We are
About Stalin and KhrushchevWhat you didn't want to know about England
Military Reviewin Yandex News
Military Reviewin Google News
151 comment
Information
Dear reader, to leave comments on the publication, you must sign in.