Western media about the massacre in Odessa: The House of Trade Unions caught fire on its own, there was no “Right Sector” 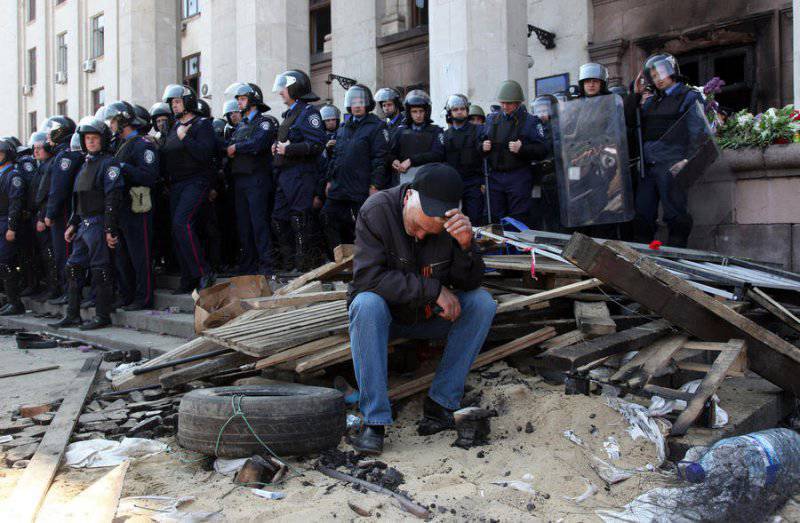 Western media provide very little information about the bloody clashes in Odessa, as a result of which the House of Trade Unions burned down on the eve and killed more than 40 people. Most newspapers and television stations presented the events as if the building had flared up for an unidentified reason, and the militants of the Right Sector were not at all on the streets. Moreover, anti-Maidan activists are being accused of attacking “football fans” in the city center.

UK AND USA
The Guardian newspaper writes that the building of the House of Trade Unions "caught fire" during the evening riots. Who set it on fire, the newspaper does not say. Opponents of the “euromaidan” who became victims of the attack are called “paid by the Kremlin” and write that they were aggressive and armed. The newspaper quotes the participants of the clashes, among which only representatives of the “Right Sector”. It is noteworthy that the Guardian has many comments on this material, the authors of which condemn the newspaper for the fact that it cites the point of view of only one side and presents the burning of the building as something “spontaneous”.

The Daily Telegraph also reports that the building just caught fire, mentions "pro-Russian" and "pro-Ukrainian" protesters, but does not say a word about extremists from the Right Sector.

According to the editors of the BBC television channel, clashes occurred in Odessa between supporters of federalization and pro-government activists, among whom were football fans. Supporters of the Kiev authorities were going to hold a march for a united Ukraine, but were attacked by "pro-Russian militants."

However, on the BBC website you can find material containing statements by representatives of both parties to the conflict. It is reported that their opinions are "very different."

The New York Times writes about “pro-Ukrainian” and “pro-Russian” demonstrators in Odessa. The latter, according to the author of the article, died due to the fact that their headquarters “caught fire” during clashes.

The publication of The Washington Post wrote that incendiary bottles threw “pro-Ukrainian” protesters into the building. “Our people did it, but now they help them get out of the building,” the pro-Ukrainian activist Dian Berg quotes the media.

Truthofwhathappens: Odessa is very far from the Russian border. Even supporters of the “Putin’s all blame” point of view will find it difficult to prove that the pro-Russian forces got there.

Vital2everyone1: They say they want freedom. They burned the fighters of the "Berkut", and now they burn citizens and joke about "how beautiful they are falling."

4Matt: “So, the fascists from the Right Sector are the only eyewitnesses who should be quoted? Yes, and from such an angle that they tried to save those who were in the building, which “caught fire when pro-Ukrainian activists staged a storm at sunset,” as if the arson was spontaneous.

German Der Spiegel gives a chronology of events with reference to the Ukrainian media. But at the same time, the author of the material refers to the video on YouTube and is outraged by the official Ukrainian rhetoric, according to which “patriots have suppressed the separatists”.

In the presentation of the German television channel ARD, everything started with a large pro-Ukrainian demonstration. Armed pro-Russian demonstrators allegedly arrived in the city on buses and attacked supporters of a united Ukraine, among whom were football fans. Supporters of the "anti-Maidan" were surrounded and pushed aside to the House of Trade Unions, and then they threw the building with "Molotov cocktails." The police while inactive.

Austrian television channel ORF gives this view on the events: “The police could not dissolve two radical groups. The opposition of the east and west of Ukraine will only increase from this. As a result, people will turn to Russia: better than the Russian Federation than civil war. ”

Another Austrian media outlet, Der Standard, reports that the building of the House of Trade Unions was set on fire during the clashes, 38 people died. Who set it on fire is not specified.

The Swiss Neue Zurcher Zeitung writes: “Hundreds of pro-Russian activists, armed with batons, attacked 1500 protesters who spoke for the territorial integrity of Ukraine. As a result of the unrest there are victims. In addition, the building of the House of Trade Unions was set on fire. According to the Ukrainian police, 31 people died in the fire. ”

Klaus Hennicke: “Yesterday evening, the media (ARD, ZDF, N24) unanimously said that pro-Ukrainian demonstrators had driven pro-Russian activists into the House of Trade Unions and then set it on fire. The Frankfurter Allgemeine Zeitung did the same. But this message was later not deleted. It has been rewritten. Now the House of Trade Unions just caught fire, and the 37 people died. What can not be that should not be? "

Peter Niedermeyer: "The House of Trade Unions is on fire." Is there an interview from the House of Trade Unions why he suddenly decided to catch fire? Between arson and “caught fire” there is not only a legal and insurance difference. Journalists who were on the scene try to hide the truth, and this shows whose spiritual children they are. Yesterday there was one at the FAZ that tried to find fascism in a peaceful May Day demonstration. But the fact that the fascists set fire to the House of Trade Unions — with many victims — is a Western symbol of human rights and democracy. Therefore: you are fascists!

Horst Lauersen: Why is this crime not reported in an editorial?

French newspapers mention the clash between anti-Maidan activists and football fans who have organized a march for a united Ukraine. Le Figaro reports that pro-Russian activists were armed with "baseball bats, metal chains, pistols." The newspaper ignored the fact that the anti-Maidan camp was set on fire; the fire, according to the material, occurred under unexplained circumstances. The publication only quotes the Ministry of Internal Affairs of Ukraine that the fire had "criminal" reasons.

Le Monde writes: “Hundreds of fans pulled up to a tall seven-story building with columns. The tents of pro-Russian activists were set on fire. Everything was shrouded in smoke. Then from both sides — from the roof and from the square — various objects and “Molotov cocktails” flew. After that, the author of the material continues, the building caught fire, people inside “were trapped,” many suffocated, “8 people, according to reports from the Ministry of Interior, died jumping out of a window.” The publication also reports that the head of the presidential administration of Ukraine called the incident "a provocation of the Russian special services, which was to divert attention (of the Ukrainian army) from the operation."

L'Express notes that the building was set on fire by pro-Ukrainian activists: "In the evening, pro-government demonstrators set fire to a pro-Russian tent camp, and then the House of Trade Unions, where pro-Russian activists took refuge."

Nouvel Observateur offered readers this version of events: “On Friday, unrest also took an unprecedented scale in the port city of Odessa, where a demonstration for the unity of Ukraine was subjected to a brutal attack by pro-Russian activists. The result: at least four dead and a dozen injured by pro-Kiev protesters. But in the evening, the latter eventually prevailed. They pursued pro-Russian activists to the House of Trade Unions, where they barricaded themselves. Shots rang out on one side, and Molotov cocktails flew on the other.

But the independent publication Points-de-Vue-Alternatifs (“Alternative Opinion”) gives in his article the commentary of an eyewitness, who told about the inaction of the security forces and that the “pro-Russian” activists were unarmed and few in number.

Benoit J: It is necessary to punish the illegitimate authorities in Kiev, supported by neo-fascists from the EU and the USA.

Grillon: The church in Oradour (in France, during World War II - note RT) and the House of Trade Unions set fire to the same people - the Nazis.

Louis 14001: Do not forget that the current government of Ukraine came to power with the help of weaponsand there were hundreds of victims. This power is illegitimate, and everything that happens in Ukraine was predictable.

WinstonSmith: Shame on CNN! I just watched their story about the clashes in Odessa, they almost don’t talk about neo-Nazis from the “Right Sector” who set fire to the building with teenagers and women inside.

Speech in the last commentary, apparently, is about the CNN television story, in which the tragedy in Odessa was highlighted as follows: “In Odessa, a fight broke out between supporters of two camps: Prokievsky and Pro-Russian. During the clashes killed four people. Also the building of the House of Trade Unions caught fire. What caused the fire is unclear. About 40 people burned in fire. ”


The majority of Western media, following the politicians of their states, support only one of the parties to the conflict and are guided solely by their own interests to the detriment of not only professional ethics, but also human values. During the conflict in Ukraine, we repeatedly became witnesses of the manifestation of double standards and a unilateral interpretation of international law. Condemning the policy of the Russian Federation, the world community hypocritically closes its eyes to the gross interference of Western countries in the affairs of a sovereign state, which has already led to numerous victims.

Ctrl Enter
Noticed oshЫbku Highlight text and press. Ctrl + Enter
We are
What you didn't want to know about EnglandInterview by President Bashar Al-Assad to the Sunday Times
Military Reviewin Yandex News
Military Reviewin Google News
156 comments
Information
Dear reader, to leave comments on the publication, you must sign in.