Chronology of the choked blitzkrieg 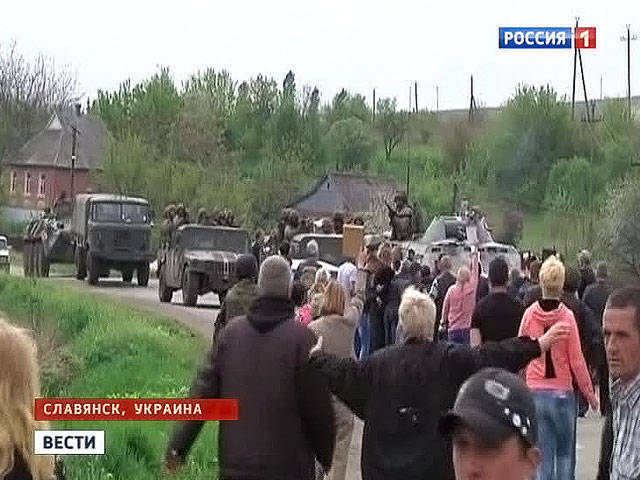 Kiev planned to complete the punitive operation in the southeast in 24 hours, completely clearing Slavyansk. However, the assault failed. Then the end date was moved to 24 hours, shifting forces from the heavily fortified Slavyansk to the less protected neighboring cities. However, even there the attack choked, encountering the fierce resistance of local self-defense fighters with the support of local residents.

They arrived in Slavyansk at 4.30 in the morning without declaring war. First, they fired from the Kalashnikovs, then machine guns and rocket launchers were used. Mi 8 and Mi 24 combat helicopters instantly filled the sky. So, undercover aviationOn May 2, troops sent by Kiev entered the city.

Unarmed locals stand up for defense. But the mechanic-driver of the armored car still presses on the gas. Rides on the legs of an old man. Even that does not stop him. Military warning shoots into the air. Well, in the militia-immediately to the defeat.

Punitive operation. In another way and you will not name. No warning, not even a corridor for the most helpless, women and children. Almost immediately, five were killed: three militiamen and two civilians. Wounded do not have time to count. Self-defense units are responsible, who can. Someone from "vozdushek", and someone from MANPADS.

The aggressors did not expect this. Three Ukrainian Air Force helicopters were shot down at once. The pilot of one of them managed to save. But it was not his colleagues who helped him, but the militia. They simply abandoned him. The captain was taken to the ambulance in the only hospital in the city, where there is not enough medicine or blood products to the wounded. Slavyansk - in blockade.

What forces Kiev threw at Slavyansk can be seen in satellite images. Here are 22 armored personnel carriers located west of the city, about 4 kilometers away. Nearby - 11 combat vehicles, and 10 tanks. Even closer, on the approaches to Slavyansk - 15 armored personnel carriers. And finally, 21 armored vehicles at the northernmost gates of the city.

And as a continuation - the troops sent by Kiev, still without warning rush into neighboring Kramatorsk. The military shoot directly from the BTR. From machine guns and large-caliber machine guns on unarmed people.

According to local self-defense, 10 people were killed and more 40 were injured. As in Slavyansk, tires are burning in the city. Street fights begin. Units with chevrons of the Security Service of Ukraine and militants in the form of the National Guard are going to storm the positions of self-defense.
The backbone of the National Guard - units of the "Right Sector". They are now used as saboteurs. Zasylyayut to do provocations. And, as on the eve of Krasnoarmeysk, steal people.

Armed bandits, a man under 30, in black masks, attacked a checkpoint. The cars were burned, and almost the entire self-defense detachment from 12 was taken away in an unknown direction.

Who is behind this, it became clear when this video appeared on the Internet. Kharkiv radicals threaten supporters of federalization. And call themselves "black men".

From today, separatist activists have disappeared in the Kharkiv region. And they will disappear. Soon they will disappear altogether. And in the South-East all new punitive squads of the Right Sector are now being formed. Here is the intercepted SMS correspondence of one of the coordinators of the nationalist battalion "Donbass" Vasyl Budik with the head of the Ministry of Internal Affairs of Ukraine Arsen Avakov. Budik is a close friend of Dmitry Yarosh, besides having a Georgian passport. He writes about the readiness to assemble a fighting group of up to eight hundred people. This is the saboteur Budika fighters of self-defense was detained the day before.

And there may be many such people recruited from abroad. All the same Minister Avakov and the Head of the Security Service of Ukraine Nalyvaichenko issued orders to produce about three hundred passports of Ukraine for foreign citizens. Mainly for visitors from the Baltic countries and Poland. In radio communications, those who attacked Slavyansk have already heard English.

The key figures of this punitive special operation in the east of Ukraine are somehow connected with the United States. Starting with Speaker Alexander Turchinov Rada, who calls himself the president. Once a pastor-Baptist, not once seen in the service of the pro-American sect "Embassy of God." Now it is he who gives the order for a military assault on Slavyansk. Turchinov submits to the head of the Security Service of Ukraine Valentin Nalyvaychenko. He directly leads the assault. And its proximity to Washington has never hidden. While working as Consul General of Ukraine in the United States, he was recruited by intelligence. So no wonder Joe Biden calls him "his man in Kiev."

On the basis of their love for Stepan Bandera, they agreed with the radical leader Dmitry Yarosh. It is his “Right Sector” that is now joining the ranks of the punishers. And he looks to the east with hatred.

“Russia is a century-old enemy of Ukraine. And as long as the Russian empire exists in any form, real independence of the Ukrainian people is impossible,” says Dmitry Yarosh.

The right hand of Nalyvaychenko is General Vasily Krutov. It was he who promised to “destroy” those who would not submit to Kiev. By the way, also in the past, a CIA agent. And according to data from the environment, for the operation in the east of Ukraine, he demanded 5 million dollars and US citizenship.

Fully this tree of the hierarchy of southeastern punishers looks like this: at the head of Turchinov, then at Nalyvaychenko and the well-known Twitter lover Arsen Avakov. In their submission - Krutov. His orders are taken by the commander of the special unit "Dnipro 1" Yuriy Bereza. "Right Sector" is managed by Yarosh. The campaign on Slavyansk is led by the Commander of the National Guard under Stepan Poltorak, Acting Defense Minister Mikhail Koval and the Acting Minister. the head of the presidential administration of Ukraine Sergey Pashinsky.

Knowing all this about the new Ukrainian leadership, all the fears of the residents of Slavyansk, Kramatorsk, and Lugansk become clear. And with each of their new actions punitive only confirm their reputation.