The Civil War in Ukraine is inflamed by the National Guard 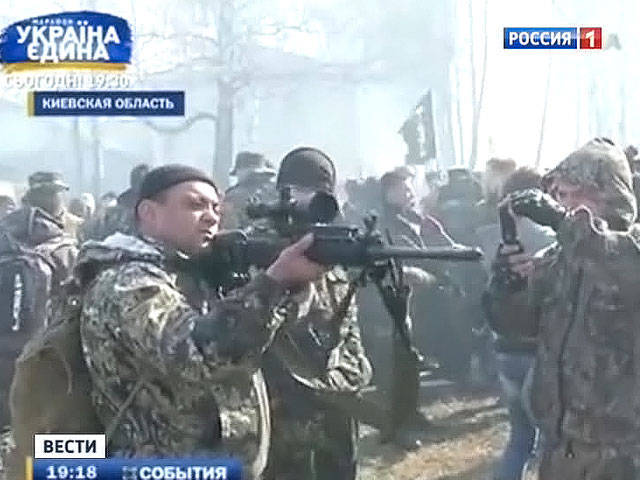 The main striking force of Kiev against the militia of the southeast has become the so-called National Guard, or, as its resistance fighters call, the Nazi Guard. These are brigades assembled from radical volunteers, commanded by the leader of the Right Sector, Dmitry Yarosh. The militants of the organization are young people from 17 to 20 years, many of whom have been trained in foreign camps, under the guidance of NATO instructors.
They have no combat experience, but there is an aggressive ideology and willingness to shoot at anything that moves without asking questions of morality. What, in fact, is confirmed by the actions in the South-East: more than half of the defenders killed by them are unarmed civilians.

"Are you ready for the command" To battle! "Apply weaponif separatists hide behind women? "These are questions from a psychological questionnaire, which militant units answer before being sent to the southeast.

Ten days at a training camp. In the curriculum - fighting against the peaceful protesters. Blocking, suppression by fire, storm of a building under the cover of an armored personnel carrier. The command appointed by the Maidan, the minister Avakov and the acting president Turchinov, is closely following the preparation of the National Guard units. In the military uniform of the Supreme Commander, he inspects one of the training units.

In recent years, spent in the forest camps of Galicia and Volyn, they have learned well how to flock. On the winter Maidan it was hundreds of self-defense and combat units of the Right Sector. Now, in the ranks of the National Guard, there are companies and battalions. Sixty thousand people mobilized, armed and evil. The main striking force consists of Dmitry Yarosh’s militants.

"Shoot and kill. But not to organize order, not to provide security on the streets of the city. Therefore, today we can say with all courage that the National Guard is organized with one purpose - to kindle the Civil War in Ukraine, so that Ukrainians kill Ukrainians, so that mistrust, hatred and anger grow ", - said Vladimir Rogov, coordinator of the Popular Front for the Liberation of Ukraine, a former adviser to the Minister of Education of Ukraine.

Vladimir Rogov knows what he is talking about. The native Cossack in the days of Maidan was in Kiev and tried to tell people in the square who actually stood behind the rebels. Pravoseki immediately declared his enemy and began to hunt. Beaten several times. According to Rogov, Dmitry Yarosh only pretends that he does not depend on the current Ukrainian government. As the tragedy in Odessa showed, they act together.

“In fact, this is one gang and they very quickly find a common language. They argue with each other and almost fight. But when the special operation of the Right Sector takes place, Yarosh called up regularly with Avakov. We have this information, it is confirmed” - explains Rogov.

A native of Kharkiv region, a military officer and military journalist Viktor Baranets sees a serious danger in the creation of the National Guard and its reinforcement.

First of all, for the Ukrainians themselves.

“Only one idea rules the brains of the National Guard fighters — to implant the fascist ideology on the Ukrainian people. This ideology is designed to destroy dissident people,” said Viktor Baranets.

Against the backdrop of a demoralized regular army, the National Guard appears completely mobilized. And almost all power structures are ready to crush under themselves.

“The National Guard wants to take control of the borders, primarily eastern, with Russia and Belarus. The National Guard does not want to obey and enter the structure of the Ministry of Internal Affairs, it wants to be autonomous. More authority and more weapons,” explains Vladimir Rogov.

The fact that the National Guard, Stepan Poltorak, commands a lot also says a lot. He also takes the oath of the recruits. While still the head of the Academy of Internal Troops of Ukraine, Poltorak actively implanted Bandera orders among the cadets.

There is no doubt that his guards without any mental anguish will open fire on women with the flags of the Donetsk People's Republic. The first check of the National Guard has already passed in the battle of Slavic.