The situation in the south-east of Ukraine. Chronicle of events. 5 May 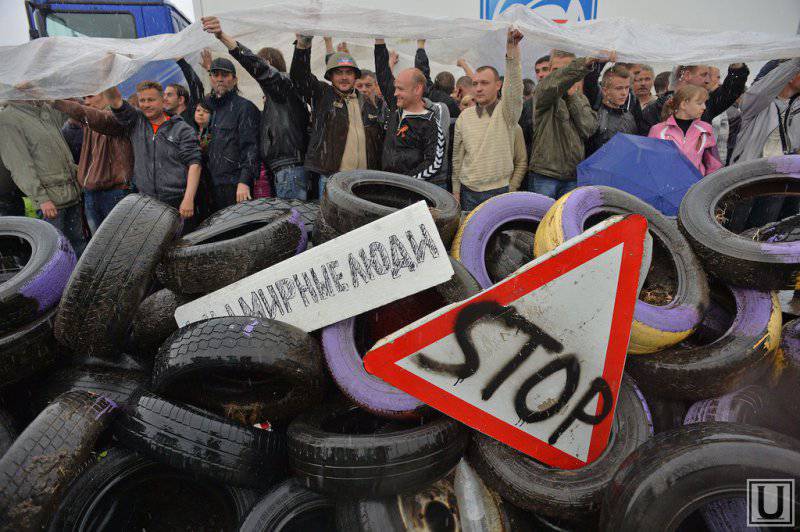 20:32 As a result of the actions of the Ukrainian army in Slavyansk, the militia could lose to 20 people killed. “We have many dead. Maybe more than 20 people, ”a representative of the city’s self-defense staff told Interfax. According to the agency interlocutor, the fighting continues, but the militia managed to stop the advance of the Ukrainian security forces in the direction of the central part of Slavyansk.
20:29 Ukrainian Air Force bombed a train near Slavyansk. According to the military department, the "militias" "tried to convert coal cars for armored trains:" To do this, they slaughtered loopholes at night adapted for firing. " Converted into an armored train, the composition was destroyed by the Ukrainian aviation.
20:22 The self-defense forces of the Ukrainian Slavyansk in the Donetsk region are counting on exchanging the captured Ukrainian soldiers of the special forces Alpha and militants of the radical Right Sector for their people. “We have in captivity three fighters of“ Alpha ”, as well as“ pravoseki ”. We hope to exchange them. I am negotiating, the question has already been agreed upon by our two people, ”RIA said News the head of self-defense of the city Igor Strelkov.
19:55 Dmitry Steshin special. Komsomolskaya Pravda:
A familiar German journalist who can’t get to Slavyansk for the third day and grazes in one block, says briefly: "From Izium comes: a convoy of vehicles a dozen kilometers long, lots of artillery, hold on!". Hold on, do not wait!
19:47 In Odessa, in order to avoid provocations, it was decided to abandon mass events on Victory Day.
19:20 The militiamen of Slavyansk captured several militants of the Right Sector, who were trying to enter the city by ambulance.
19:17 State Border Service of Ukraine has introduced a new mark for foreign passports of foreigners - a ban on entry into the country.
19:07 The candidate for the presidency of Ukraine, Sergei Tigipko, called for the resignation of the Ukrainian government and the start of negotiations with the regions.
19:04 In Ukraine, "there is a civil war provoked by the current Kiev authorities," on whose conscience is "the death of dozens of people." This is stated in the adopted statement of the presidium of the Lugansk regional council.
18:41 Lugansk. Details about the attack on the veteran.

18:40 Nine roadblocks were established around Kiev to prevent provocations.
"Now 10 of such roadblocks on the main highways of the Kiev region has already been established, on which the control of vehicles is provided by State traffic inspectors, soldiers of the special-purpose police regiment, members of the National Guard and the People’s Self-Defense Detachment," the press service of the Ministry of Internal Affairs of Ukraine said.
18:27 Anti-fascists of Lviv refused to mass 9 shares in May
18:13 In cities and districts of the Donetsk region, where Ukrainian security officials are conducting a punitive operation, there are restrictions in the supply of bread.
18:04 The head of the Ukrainian division of the Russian company Yandex, Sergei Petrenko, announced his decision to go on vacation indefinitely. About this he wrote in his personal blog.
"Ukraine today is in trouble. One of these days, trouble came to the city where I live - to Odessa. People died and I am sorry that this happened. I can’t imagine a person who could remain indifferent to what is happening - I just can not. Together However, I am one of the leaders of a large company, a public figure. In the current situation, my personal position as a person and citizen is transferred to the entire Yandex, which respects political neutrality. This can affect the whole company, in which both my and thousands of people have invested my colleagues, "said Petrenko.
Earlier, a number of Russian media accused Petrenko of openly supporting "the massacre of Odessa citizens." In particular, a Facebook account manager was quoted:
"Everything is good. Almost cleared the city from the separatists. So we are waiting for the summer."
Subsequently, it was deleted by the author.
18:01 In the area of ​​Slavyansk during the execution of combat patrols shot down a helicopter of the Ukrainian Air Force Mi-24.
“A helicopter Mi-24 of the Air Force of the Armed Forces of Ukraine was shot down from a large-caliber machine gun. This happened near 14.30 near the city of Slavyansk, ”UNIAN reported. Head of the Press and Information Department of the Ministry of Defense of Ukraine Bogdan Senik.
17:48 In the Donbass provocateurs take away and tear passports of civilians.

17:09 The Foreign Ministry of Ukraine supported the holding of a new round of negotiations "in the same format" as in Geneva.
16:59 Kiev authorities used aircraft against the militia forces under Slavyansk.
16:49 In the battle of Slavic four soldiers were killed, about 30 injured. This was reported in the Ministry of Internal Affairs of Ukraine.
16:40 The militia seized the oldest coal-mining enterprise in the Donbass - “Artemugol” in Gorlovka. According to a Gazeta.ru correspondent, all employees of the enterprise were allowed to leave the administrative premises. It is not known whether the attackers were armed. Earlier, the militia captured Enakievsky metallurgical plant.
15:15 Self-defense forces in Slavyansk check information about a large number of people killed in battles in different parts of the city.
"The fighting is still underway. So far we have managed to stop the advance of the enemy deep into the city, but all this was given to us with great difficulty. We have many dead. Maybe more 20 people," said a spokesman for Interfax self-defense.
He clarified that we are talking about the militias. The number of victims among the civilian population is still unknown.
14.57 Germany does not intend to send its military observers to Ukraine as part of a possible new OSCE mission. This was reported by a representative of the Ministry of Defense of Germany.
14:48 Confirmed information about one killed militia in the battles of Semenovka, the correspondent of "Reedus". According to him, now there is a lull, from the side of Semenovka, ambulances are sent to the center of Slavyansk.

14:46 The people's militia could not stop the armored personnel carriers of the Armed Forces of Ukraine on the Slavyansk-Donetsk highway. Armored personnel carriers are moving in the direction of Donetsk.
14:43 Appointed by the Verkhovna Rada. President of Ukraine Oleksandr Turchynov discussed by telephone the current situation in the country with German Chancellor Angela Merkel. According to him, the new government of the country "is doing everything to stabilize the situation in the east of Ukraine."
Security Service of Ukraine denies the fact of consultation with the CIA.
14:14 A joint meeting of the European Commission and members of the Cabinet of Ministers of Ukraine, appointed by the Verkhovna Rada, will be held on May 13 in Brussels.
14:12 In the east of Ukraine, the military operation of the Ukrainian units resumed, the SBU said.
14:05 The cannonade is already audible in the city, Ukrainian troops are coming up, according to KP journalists on the scene.
14:02 Militias near Semenovka surrounded Ukrainian military. “According to one of the fighters, the militia group from 25 man got into the double ring environment. Five went out, ”correspondents of Komsomolskaya Pravda reported.
13:54 As a result of the shelling of Slavyansk from an armored troop-carrier, a civilian was killed.
13:32 On the Slavyansk-Donetsk highway, Ukrainian special forces fire at the roadblocks of the militias.
13:14 In eastern Ukraine, partly disrupted rail service. This was reported in the press service of the Donetsk Railway.
12:54 Dmitry Steshin special. Komsomolskaya Pravda:
Under Semenovka, at the limit of audibility from the center of Slavyansk, the battle with heavy armament is already 30 minutes. Could be mistaken, but there were launches of "grads".
12:30 Slavyansk The first Crimean militia arrived

12:25 There are battles near Kramatorsk and Slavyansk. At the moment, there are firing near the settlement Semenivka (located in the south-east of Kramatorsk) and in the fields near Malinovka (between Slavyansk and Artyomovsk). This is reported by the correspondent of "Reedus".
11:30 In Nikolaev last night, unknown set fire to the branch of "PrivatBank". This was reported in the Ministry of Internal Affairs of Ukraine.
As it is specified, the fire destroyed the ATM, the entrance doors, the sign, the corridor was burnt out. In addition, the damaged balcony of the apartment, located on the second floor of the building.
11:25 At the television tower in Slavyansk began hostilities. This is reported by civilian journalists. According to them, on the part of the federalists there are wounded and one dead. Confirmation of information from its own correspondents "Reedus" does not have.
10:53 The Ministry of Internal Affairs of Ukraine sent additional special forces to Odessa. As the press service of this department reported, a special unit of the National Guard "Kiev-1" has already arrived in the city.
The press service cites the words of Arsen Avakov, appointed by the Verkhovna Rada Acting Head of the Ministry of Internal Affairs, who claims that the “special unit” will be headed by Odessans.
We are talking about the special division "Kiev-1", formed in the Ukrainian capital in late April from volunteers to patrol the city. As reported then, the fighters of this special unit can be recognized by the black uniform, they are armed.
10:04 Ukrainian security forces attacked the roadblocks of self-defense forces around Slavyansk, a spokesman for the city’s self-defense staff told Interfax.
Roadblocks are attacked around the perimeter of the city. There are battles, as a result of which five militiamen were seriously injured.
According to the representative of self-defense, the Ukrainian security forces are trying to make a blockade of the city.
“We are already locked in a tight ring, many shops are closing because there are no products, they have nothing to trade,” said a militia spokesman.
09:22 An army unit to monitor law and order is formed in the Odessa region of Ukraine, UNN reports, citing the chairman of the regional administration, Vladimir Nemirovsky.
"We are forming a special army unit numbering more than 400 people. The task is to quickly restore legality and law and order in the region. The salary is small, but we will pay extra from the Patriot charity foundation," Nemirovsky quoted.
2.30 In Odessa, the funeral of the first victims in the regional House of Trade Unions, which was set on fire by 2 on May by activists of radical organizations, will take place. Odessa Regional Council will meet in an extraordinary session to express no confidence in the leadership of the regional state administration and law enforcement agencies.
1.10 In Konstantinovka, the Ukrainian military, moving on four armored personnel carriers, fired at a roadblock and are moving in the direction of Donetsk.
0.58 Representatives of the Donetsk People's Republic stated that the plants in Kramatorsk work as usual. Earlier, the Ukrainian media announced the suspension of the plants.
0.55 Representatives of the Public Chamber of the Russian Federation are preparing a lawsuit in the European Court of Human Rights (ECHR) which will require the Ukrainian authorities to be brought to justice and their guilt in the mass murder of citizens in Odessa and the death of the civilian population in other Ukrainian cities to be assessed. This was told to Izvestia by Georgy Fedorov, a member of the Public Chamber.
0.53 Supporters of the federalization of Ukraine occupied the Donetsk Executive Committee. Sturm was avoided: the head of the administration went out to the protesters and declared that he was ready for dialogue.
0.21 The Union of Women of Russia will hold actions in memory of those killed in Odessa, Slavyansk and Kramatorsk.
Ctrl Enter
Noticed oshЫbku Highlight text and press. Ctrl + Enter
We are
Reports from the militia of New Russia for 29 August 2014 of the yearThe situation in the south-east of Ukraine. Chronicle of events. 3 May
Military Reviewin Yandex News
Military Reviewin Google News
306 comments
Information
Dear reader, to leave comments on the publication, you must sign in.