What Merkel will say and what Obama will not say 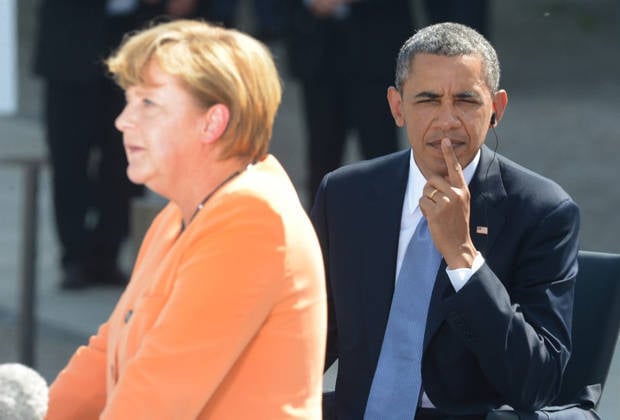 The anti-Russian sidewalk of the West against Russia firmly sits on the belly. This made sure all without exception lovers threaten finger. It would seem that this should cool the hotheads, but the United States still continues to put pressure on the trigger: take out the sanctions and put it on!

It must be said that Merkel, with the word “sanctions,” is already experiencing stomach cramps. Thus, she plans to speak with Obama not on the topic of strengthening sanctions, but, perhaps, just the opposite. As it became known, Merkel will offer Obama a different approach to the problem named Putin. There are reasons for this, and quite large ones.

It is clear that nothing can be done with Putin. In all the years that Obama was in power in the United States, he never won a single set and constantly lost in his own serve. Putin holds himself tight in the saddle, and the people always support him. In addition, Putin managed, almost without words, to bend the now-former American Ambassador McFaul into an arc, who was not just some political scientist, but above all an obsessive Russophobe ideologue. It took about two years for the White House to understand that it was impossible to overthrow the butt with the whip, although everything seemed to be on the surface. Even before McFaul’s arrival in the United States, and even before being appointed as ambassador to Russia, we posted an article entitled “Michael McFaul. Wreck before takeoff. " As you see, we understood then how this would end. Now the exact same forecast for US and EU sanctions.

With a certain feminine flair, Merkel also “rode” to the thought of the futility of sanctions. We can say that Merkel would have to bring the “Restart” button to the American president, bearing in mind the need to restart Russia-US relations. President Obama himself also feels that the time has come for this reset, but he lacks the determination to put it in the information field. For this, a tactical move was invented: Merkel arrives, confers with Obama, and as a product of these meetings a new program of the “Goodwill of the West” appears. Here, Obama insures against American Republican political figures who, for concessions to Putin, will fight Obama like wolves of a sheep. If the decision is made together with the EU, then at least half of the criticism will go to Europe. Maybe it will sound strange, but Merkel’s visit to Washington needs to wait for a thaw in relations with Russia. Rather, Obama will have such a chance.

Very often in the media they say that the United States does not lose anything from sanctions against Russia. This is a deep misconception. When the basis for the analysis is only the amount of trade in $ 50 billion, and they say, Europe has more than $ 400 billion, then this does not mean that the US is willing to risk even these 50 billions. Paris won over 2 billion ready to listen to notations from Putin to infinity. While they are talking about "non-participation" in the sanctions of the French side until the autumn, until the Mistral surrenders, what will happen if Putin orders two more? Again, wait for two years of sanctions? In general, Putin understands well how to build relations within the EU, breaking the “monolithic unity” in the positions of the EU countries.

Western journalists, with some annoyance, speak of the full support of the Russians for Putin’s position. Nobody could re-educate the Russians. The one hundred thousandth demonstration on Red Square, dedicated to May Day, clearly shows that the Russians could not be re-educated.

The losses of the American administration were far beyond the limits of Russian-American relations. Remember Iran and Syria. There, Russia consolidated its positions with the interests of the peoples of these two states. Now, perhaps, all this is no longer on hearing, but only because Putin once propped up the door through which NATO troops would have to gush, Putin crossed the road to Obama and did not even apologize. As for Snowden, it's still worse.

As a result, Obama understands that autumn will be a real nightmare for the United States. Now, trying to align relations with Russia, Obama, perhaps for the first time, will try to look a little further than his own nose, and this is not his own insight. Such advice is given to Obama by the old fox Robert Gates, if someone has forgotten, this is Zbigniew Brzezinski's student, the one who, together with Brzezinski, dragged the USSR into the war in Afghanistan. Now he is heading a kind of analytical desk, which is developing some tactical steps for the United States, which should seriously worsen the economic situation in Russia. If Obama misses this moment now, then almost tomorrow everything will be a bloody nightmare and the collapse of US policy. In fact, some such initiatives are the prerogative of the State Department, but as you know, the current State Department is no good at all. Instead of a subtle political game, very often the State Department is counting on the Pentagon, but this is clearly not Obama’s choice.

Remember how many times it has been stated that Iran will be subjected to military execution, but Obama did not decide on a military campaign, despite the fact that Israel was promised that Iran would be attacked after some intersection of the "red line". However, nothing happened. Now even Israel has understood all the vain hopes for Obama. No need to think that Obama somewhere hovering above the clouds and soaring there, not being able to ascend, but not falling. This is absolutely not true. According to the Americans, Obama lost the initiative, and the sworn friend of Vladimir Putin, John McCain, also speaks about this. In any case, he always calls the Russian president "friend Vlad." So, in order to climb the political Olympus again, Obama needs an initiative, he sees it in concessions to Putin as an impossibility to oppose Russia with serious sanctions. The thing is that then he will lose the support of his closest allies in Europe, and this is already a failure not only in Russia, but also in Europe.

Ctrl Enter
Noticed oshЫbku Highlight text and press. Ctrl + Enter
We are
About Stalin and KhrushchevWhat you didn't want to know about England
Military Reviewin Yandex News
Military Reviewin Google News
117 comments
Information
Dear reader, to leave comments on the publication, you must sign in.