Odessa 2 May. What it was and why Putin did not send troops

4 May 2014
523
Waking up in the morning and analyzing the information in the network, I realized that the "unexpected" events in Odessa were not only for me. And even more so the consequences of these events. To understand me, I propose to go through the whole chain of "facts".


The evening of May 2. 2014 in Odessa did not foretell anything “bad” to either the residents or the city authorities. Some knew that “something” would happen, but they believed that everything was under control. Others did not guess anything. The procession "ultras" and the militants along the streets of Odessa was relatively quiet. But in the street. The Greek were attacked by people with bats, in combat gear, with St. George ribbons and RED BANDS on their hands. It was here that the first oddity and "discrepancy" happened with the official version of the junta. Exactly the same red dressings were in the hands of SOME Interior Ministry officers. The most interesting thing is that it was in this place where these employees were located and the “breakthrough” of “separatists” to the marchers took place. It was also absolutely “accidental” that this moment was taken from a high point, in relation to what is happening (as a former operator I’ll say: it means that the filmmaker knew the script and chose the position for shooting in advance). This was followed by a short skirmish as a result of which the first victims appeared. Moreover, unidentified "arrows" shot from the roofs and from the crowd (according to the junta it is clear that the pro-Russian). Then quick, on command, the withdrawal of "militants with bandages." After that, people with bandages disappear from the scene (they probably just took off the bandages and ribbons) and mixed with the crowd. Instead of pursuing overt provocateurs, the “brutalized” crowd rushed to Kulikovo Pole to the “fedets” camp. There were 200-300 people mostly old men and women (no more than 100 men) who could not offer any resistance ten times greater than the number of attackers. Therefore, they preferred to retreat to the House of Trade Unions, where it would be easier for them to keep a “defense”. Until now, everything went according to the plan of the "junta" (apparently, the plan included a repetition of Zaporozhye and Kharkov). The police simply moved on and were just “extras”. But the crowd, "intoxicated" with the first blood, could no longer stop. The kind of practically defenseless opponents did what they should have done. "Punitive killers" have lost their sense of proportion. Then there were only instincts.

"Burning" and "finishing off" the surviving "federates" can only be explained by this. It happened around 22-00 in Kiev (remember this time I will come back to this). It was at this time that the governor (gauleiter) of Odessa wrote to Facebook. that he does not see anything illegal in the actions of the crowd (as he probably now bites his elbows). He thought that everything was going according to plan. The camp of the "federates", which he could not disperse for several weeks already, according to the "plan of operation", has already been demolished. Those few "corpses" that were in Greek again "according to the plan" will be "hanged" by "pro-Russian militants" (those with ribbons and armbands). Who could have imagined. that the brutal "onizdeti" will burn a few dozen inhabitants of Odessa "alive", and those who escaped will be killed in the square without being ashamed of what they are being shot.

1. Militants that burned people were clearly "sharpened" by the fact that they were "fighting" against Russian saboteurs. Apparently, for them, too, it was a “shock” that they burned the same people from Odessa (they burned not only people from Odessa, but also many people from Odessa), and that this “blood” was on their hands (and this will bother them again). That is why the stream camera went shooting inside the building. And the first thing the punishers did was a “document search”.
Special thanks to etherealstation for the “civic stand”, who immediately, without delay, “refuted” the fake that “Russian mercenaries” were among the dead: http://etherealstation.livejournal.com/63026.html.

2. The actions in Kramatorsk went in "synchronization" with Odessa. Apparently, it was Odessa that was supposed to be an “information veil” (as I recall, Russian saboteurs arranged a massacre with “victims” in Odessa, so that the “cleansing” of Kramatorsk was allegedly justified), which ensured the actions of punishers in eastern Ukraine. Looking ahead to say that as soon as the junta realized what "history"they were entered by too zealous performers, the punitive operation in the east, as if by command, was curtailed (at least until this hour there are almost no active actions).

3. Actions Gauleiter Odessa. I have already mentioned that this creature (I cannot apply another word after yesterday’s) “according to plan” issued an “indulgence” to the murderers, declaring that everything that happens in Odessa is legal:

It (the creature) did not know that it was at these moments that the brutal crowd was burning alive from Odessa, and the survivors were trampling on their feet. A few hours later, when the horror of the situation reached, and his atrophied brains were followed by another statement, in which it said that it would punish the guilty. That is, find the switchmen. The first has already been found. This is the head of the regional police. Not to say that he is not guilty. Is to blame. But he is not the main culprit. That's for sure. In general, the entire Kiev top has not yet “recovered” from yesterday. Neither Turchinov nor Yatsenyuk have yet made any appeals and have not gone to the “debriefing” (They definitely distance themselves from what is happening. Although it looks ridiculous. The President and the Prime Minister no matter what. What are you then the government). For them, yesterday’s was also a shock.

4. There are no militants with bandages among those killed in the House of Trade Unions, which completely disproves the version of the junta.

What now will follow. There will be a radical protest. Odessa will now be difficult to protect from the "hot phase" (and other cities too). But now in Odessa there should appear a group of "Strelka" (analog), which can begin to "lead" the process. Definitely many of the former citizens of Ukraine turned away from the new government (especially in the South-East). On the other hand, the Junta protected itself from the coup, which was supposed to take place today or tomorrow (Tymoshenko’s gang can still steer for a while.) The “counterrevolutionaries” got what they wanted - they drank blood (for a while, of course). “Natsik” in this situation will be appointed “switchmen” (not today. Later.), Which is also beneficial for Turchinov-Tymoshenko.

Now I answer the question. Why Putin did not send troops. What for? In the Donbas and Lugansk situation is stable. The population of these regions after yesterday’s embittered against the junta is beyond any measure, which should affect the results of the “referendum” 11 in May. For the troops of the junta, Slavyansk was still a "tough nut". Militants in Odessa themselves began a "process" that could not begin without external assistance. Yes, and all over the Southeast, it seems everything is just beginning.

Dear yurasumy built a consistent and correct version. I completely agree with him - given what I know myself.

That's just really still worse and dirtier than the esteemed yurasumy. But he is too noble to even imagine such a thing. 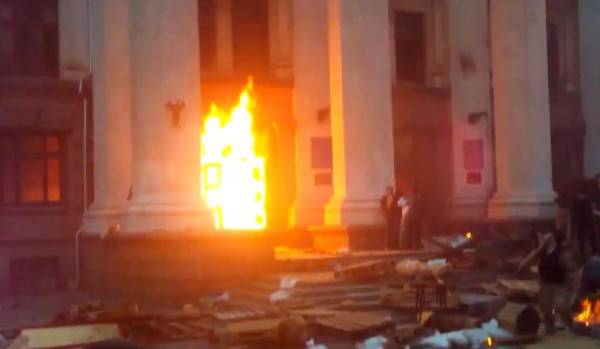 Initially, it was a mean and cruel plan to suppress Odessa, following the example of Kharkov. But the Kievan blunders did not calculate that it was impossible to control the Nazis who had drunk blood - and therefore now in Kiev everyone is terrified of what happened (as Yatsenyuk and Turchinov are amicably together) and do not know what to do. Instead of extinguishing the protest in Odessa and the South-East, they splashed into the fire a tank of aviation kerosene. And now the separation of the South-East is not even a matter of probability, but a matter of time.

Now, between the Kiev-Western "Svidomo patriots" and residents of the South-East-the ashes. Bitter ash 38 Odessa.

And the murder can be redeemed only by death.

Ctrl Enter
Noticed oshЫbku Highlight text and press. Ctrl + Enter
We are
Interview of V. Putin to Channel One and the Associated Press AgencyWhat you didn't want to know about England
Military Reviewin Yandex News
Military Reviewin Google News
523 comments
Information
Dear reader, to leave comments on the publication, you must sign in.