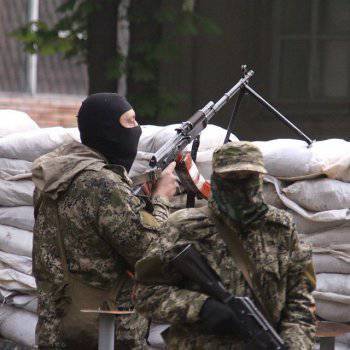 The attack on civilians and militias began on 2 in May on 4.30 in the morning with an attack on several roadblocks and a television center on the city of Karachun - the dominant height over the city. The enemy used more than 20 helicopters in the attack and up to 100 units of various armored vehicles. Two MI-24 helicopters of the enemy were shot down by the Militia forces and two MI-8 helicopters were significantly damaged. The pilot of one of the downed helicopters, who was seriously wounded, was captured and taken to the city hospital, where he received emergency medical care.


During the morning battle for the height of Karachun, the militia units put up fierce resistance to the enemy, advancing with the support of the 8 BTR, inflicted heavy casualties on him and retreated to the city. Enemy losses are estimated to 10 killed and wounded. In the militia unit, defending the tower, there are no losses. Moving further, the enemy occupied the railway station and the surrounding area, then stopped the advance, and in the evening brought the armored vehicles out of the city.

During the shootings on the northern outskirts of the city (in the direction of Feed Mills), the militia managed to incapacitate several militants of an unidentified enemy unit. In the area of ​​the BZS checkpoint on the Kharkiv-Rostov highway (northeastern direction), the enemy advancing from the city of Izyum using the overwhelming advantage in numbers and armaments, after a fierce battle, the checkpoint and the territory of the Slavic Resort were taken. The militiamen who defended the checkpoint retreated to the city center without loss.

In the afternoon in the area n. Andreevka (on the southern outskirts of Slavyansk near Karachun Mountain) civilians tried to block a convoy of armored vehicles with the Ukrainian military, mercenaries and militants of the Right Sector. As a result, brutally pushing the living cordon of people and passing on one civilian, the convoy continued to move. A repeated attempt to block it led to the fact that the soldiers and soldiers of the so-called. National Guard under opened on unarmed people to kill. According to preliminary data, about 10 civilians died, before 40 people were injured.

In the area of ​​the fire station No. 38, located in the Artem neighborhood, an attempt was made to penetrate into the city center of the National Guard on the 2 buses with the support of 1 BTR. Opponent subjected to fire from small weapons and suffered losses. There are no casualties on the part of the national militia.

A sniper duel killed the commander of the Slavyansk people's militia unit, Sergei Zhurikov, born 1980, native of Sevastopol, resident of Kiev, parachutist-athlete who made jumps over 1500 and professional photographer, who served as a ponomare of the Kiev-Pechersk Lavra before the coup .

During the battle for the Vostochny roadblock, on the outskirts of Slavyansk, 2 militiamen were killed, several were wounded. Thanks to the overwhelming advantage in technology and weapons, the checkpoint is occupied by the enemy. The forces of the Ukrainian army, mercenaries, militants of the Right Sector, armored vehicles and so-called are still being forced into the Slavyansk region. "National Guard". The local population of the suburbs employed by the enemy repeatedly received information that extremists and radicals from the Right Sector disguise themselves in civilian clothes and try to enter the city under the guise of civilians, including using St. George ribbons to mislead the militias.

During the clashes that took place at a roadblock on the eastern outskirts of the town of Krasny Liman, 1 was killed by a people's militia, 3 were injured. Opponent lost to 15 people killed and wounded. The unit that launched the attack is not installed. Presumably, fighters of the Right Sector attacked. At the present time armored vehicles are pulling up to help the militants, a new attack of the militia positions is being prepared.

At the end of the day, 2 in May, the militia retained strong control over the central part of the city of Slavyansk and conducted gunfights with the enemy on its outskirts. The advance of the enemy in the second half of the day was stopped in all directions and did not resume at night.

In the morning of May 3, the enemy continued to force forces towards the city of Slavyansk and concentrate on artillery batteries on the city of Karachun, and, with the support of armored vehicles, launched an attack on the positions of the people's militia in the city of Kramatorsk from the military airfield. Currently there is a fight. Also, the enemy after a massive shelling with armored vehicles attacked the roadblock of the militia in the village. Yasnogorka between Kramatorsk and Slavyansk. 2 militia wounded. Under pressure from superior enemy forces, the militiamen were forced to abandon their positions and retreat to the city.

“Information about the three knocked down turntables was not confirmed. As often happens, two different divisions “chalked up” the same helicopter. But 2 Mi-24 is also good, I think.

“Druzhkovka after a small skirmish left for our squad. Skirmishes continue in Kramatorsk, but there is no question of any control over the city by the ukropsky troops - our garrison is holding on and suffered only minor losses today (two wounded).
Slavyansk is now partially unblocked, since the drums were removed for the raid on Kramatorsk and were not replaced by anything. Our posts in several places again reached the city borders. A few more Pravosek saboteurs were caught. In the hands of the enemy, only the town of Karachun, where the mass of paratroopers, as well as the BZS roadblock on the Kharkiv-Rostov highway, remain, is occupied by the national guard and many soldiers and equipment with the emblems of the “right sector”. By the way, the loss of dill is much more than Turchinov admitted. But since most of the losses fall on PMCs and gangs of the “right-wing sector”, Turchinov can safely lie about the entire 5 killed by them. In yesterday’s battle at Krasny Liman, the participants clearly heard foreign speech — the wounded shouted in Polish and English. Our daily combat losses in all directions were 4 “200ths” and about 10 injured. The rest of the dead and wounded - shot civilians. The data are being clarified, but there are a lot of wounded - a few dozen just under Andreevka.

“The messenger arrived from Kramatorsk. The National Guard under fired shots in all directions, on one of the blocks — two 200's and three 300's heavy — all unarmed, and one girl — the nurse just drove through the block in her car. The tactic is simple - they drive up to the block at an effective shooting distance, they peel from the CPHT and immediately leave to avoid being hit by the return fire. We do not have our own armored vehicles in Kramatorsk, so they are impudent. By night, they will most certainly leave for the base so that our grenade throwers will not get to them. They will stand there under the protection of the paratroopers ... "

Last data: Konstantinovka was held today — there were local troops in our detachment there (I sent them a few days ago from Slavyansk to put a garrison in the city). The commander is also local there. “National Guardsmen” did not dare to attack the city executive committee - it was ours. He sent back a small reinforcement and ammunition - will fight on. Avakov, by the way, in his "twitter" acknowledged the loss (wounded) suffered by the troops at the TV tower. And there are no casualties among the militias.

In Kramatorsk - about the same thing, adjusted for the fact that the garrison is a bit stronger there. Because of the chaotic shelling of freaks rolling around the city on an armored troop-carrier, quite a lot of civilians were killed. In gunfights, 2 local militia wounded. The enemy (“national guard”) lost 3 man injured. The center of the city is firmly in the hands of our garrison, and the whole city is not able to hold either ours or dill with the available forces. Their units are concentrated in the area of ​​the airfield.

In Slavyansk, a division of the anti-sniper struggle in the region north of Sobolevka (the northern outskirts of the city) destroyed the enemy’s 2 sniper (presumably from the PS or PMC). There are no casualties in the garrison a day. Returned a few more previously left positions. It's still quiet for now, although we are frightened by another “assault” on 3 in the morning. If you finally get together - thank God! But it bothered to drive units to no avail for constantly maneuvering armored groups. We are waiting, sir!

The total loss of the 95 Brigade in two days - 5 killed and 13 injured, as I kindly reported. I think the main ones were incurred during the assault of Karachun. ”

Ctrl Enter
Noticed oshЫbku Highlight text and press. Ctrl + Enter
We are
Reports from the militia of New Russia for 29 August 2014 of the yearNew Ukrainian armored vehicles: "technicals" and medical machine
Military Reviewin Yandex News
Military Reviewin Google News
139 comments
Information
Dear reader, to leave comments on the publication, you must sign in.