The situation in the south-east of Ukraine. Chronicle of events. 4 May 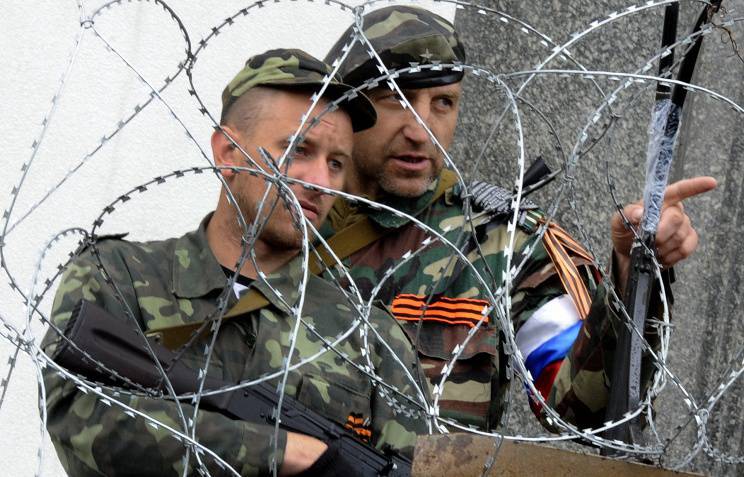 17:37 Near with. Yuganovka Lugansk region armed self-defense fighters blocked border guards and under the threat of use weapons taken away in an unknown direction. This is stated in the official report of the Ministry of Internal Affairs:
“3 May in 15: 50 received a message from the duty department of the State Border Service of Ukraine that 3 May in 15: 10 is near s. Uganovka (Stanichno-Lugansk region) armed unidentified persons under threat of use of weapons were forcibly taken away in an unknown direction to the servicemen of the Border Service Department of the Village of Luganskaya, armed with service guns who served in the Niva service vehicle, the message said.
Thus, the first "corridor" at the border is opened.
17.30 Participants in a mass rally outside the building of the Odessa city police department obtained the release from 30 of the supporters of the federalization of Ukraine.

17:22 The Ministry of Internal Affairs reports on a successful special operation to seize a television center near Slavyansk. In the interaction of the special forces and the National Guard under the armored vehicles, two elderly watchmen were neutralized, with St. George's ribbons and Orthodox prayer books discovered.
17:01 According to the ITAR-TASS correspondent from the scene, supporters of federalization carried out a sweep of the territory in the forest near the city, where the national guardsmen and the radicals of the Right Sector were hiding. Shots were heard during the clashes. Data on the wounded and dead at the moment no.
According to the representative of the people's militia Yevgeny Gorbik, the self-defense fighters plan to take control of the traffic police post and gas station on the outskirts of Slavyansk, where armored equipment of the armed forces controlled by Kiev was previously located. “According to our data, armored vehicles left there. If there is infantry there, we will push it out,” he said.
Ukrainian troops in Slavyansk control a television tower, at which they entrenched themselves. Snipers are in the area. Also here are cars of the American brand Hummer.

16:31 In Odessa, more than a thousand people blocked the building of the municipal government of the Ministry of Internal Affairs, demanding that the supporters of federalization be detained on 2 in May.
People marched to the police building from the burnt down House of Trade Unions, which hung a huge flag of Russia. Protesters chant: "Odessans will not forgive", "Russia", "Down with the Kiev junta", "Right Sector - executioners". Demonstrators also demand the resignation of Governor Vladimir Nemirovsky, who is called the "murderer," blaming the deaths of people who have burned down in the House of Trade Unions.
Protesters are building barricades on nearby streets to prevent the detainees from being sent to the district court. Despite appeals to avoid clashes with the police, people are aggressive.

14:41 Today in Lviv, Korolenko Street was set on fire by the Russian Cultural Center.
Fully burned roof and attic. The building put out 40 fire engines. According to the head of the Russian Movement of Ukraine, a native Lviv citizen, Alexander Svistunov: “the city authorities have already declared that this is not a Nazi arson, but a result of electrical wiring ignition”.
14:25 Yatsenyuk instructed the Prosecutor General’s Office to look for a “Russian trace” in the tragic events in Odessa. He also promised to make "appropriate personnel appointments and rotations in the system of the Ministry of Internal Affairs in Odessa."
14:11 In Lugansk, on Sunday, the situation is calm, announced at noon (13: 00 Moscow time), the rally of supporters of federalization has not yet begun.
According to the Interfax-Ukraine correspondent, there is no large gathering of people in the central square. On the square, as well as in the city as a whole, citizens walk around, there are no organized groups with any symbols. Those who call themselves Southeast Army fighters set up roadblocks at all key entrances to the city.
13:16 The militia in the Donetsk region claim that they managed to take the position of the Ukrainian security forces. One of the leaders of the self-defense of Donbass, Miroslav Rudenko, said that during the night battles they managed to recapture Kramatorsk, the village of Andreevka, Konstantinovka and Gorlovka. Security forces suffered losses.
Meanwhile, according to Rudenko, the security forces failed to assault the City Executive Committee in Mariupol, since practically all city residents took the defense of the city. Now the situation in the Donbass is assessed as calm, Interfax reports.
According to him, as a result of night battles there were casualties on both sides, meanwhile, in the morning, on Sunday, the situation in the Donbas was calm.
12:28 Resistance of the residents of Kramatorsk continues, the South-Eastern Front information center reported.
According to one of the militia, in the confrontation of the security forces are mainly involved civilians without weapons, without Molotov cocktails, with icons in their hands.

12:25 Ukrainian armored vehicles entered the city of Shakhtersk, Donetsk region, civilian journalists report.
11:20 In Kramatorsk, the work of the largest plants - Novokramatorsk Machine Building, Energomashspetsstal, Kramatorsk Heavy Machine Tool Plant, Starokramatorsk Machine Building Plant has been suspended. This was reported by local media.
"Enterprises that have no analogues in Ukraine, which employ a total of up to 50 thousands of people and associated with orders for unique equipment with dozens of countries, plan to resume their work on Monday (5 May-approx. Ed.)"
- give the media a message from the operational headquarters created by the city council. The reasons for the suspension of work are not specified.
We have not yet received confirmation of these messages. Nobody answers phone calls at the operational headquarters and the directorate of the Novokramatorsk Machine Building Plant.
11:10 Odessa. Tymoshenko is planning an attack on WWII veterans.

08:39 INTERFAX - According to the latest data, about ten people died in the course of a military operation in Kramatorsk (Donetsk region), the military control the city, the Russia 24 correspondent reports on Sunday.
"During the operation in Kramatorsk, about 10 people died, including two soldiers. The military managed to take all the buildings that were held there, these were the buildings of the Ministry of Internal Affairs, and the SBU, and, moreover, the TV tower was taken. Now We know that Russian channels are turned off and Ukrainian channels are turned on, ”the correspondent said on the air.
07:13 The night in Donetsk Slavyansk, where the military operation is underway to liberate the city from the supporters of federalization, was calm, reports “Russia 24”. According to the correspondent of the TV channel, no shots were heard in the city. There is no panic among the population.
05:51 In Mariupol (Donetsk region) near the building of the City Council at the present time there is no active action by the Ukrainian security officials, reports "5 channel" on Sunday.
4:30 In a clash in Lugansk, one supporter of federalization was killed, two more were injured, the Russia 24 TV channel reported.
04:14 Supporters of federalization occupied the military enlistment office in Lugansk. Soldiers conscripts were brought out of the building. The weapon, which was in the military, was transferred under the responsibility of the fighters of the "Berkut", who took part in the assault, reports the "Eastern version".
03:39 The main office of the Mariupol branch of PrivatBank is burning in the city center. The building is engulfed in fire completely, according to NTV.
02:35 In Lugansk, as a result of clashes between supporters of the federalization of Ukraine and law enforcement officers there are dead. This was told by the representative of the press center of the headquarters of the "United Army of the Southeast" Alexander Markitan. “Two were injured easily, and one was wounded in the stomach, and he died,” he noted.

02:31 At least five militiamen suffered as a result of a military operation of the military in the region of Kramatorsk, Donetsk region of Ukraine, the local self-defense spokesman Ilya Dolzhinsky said.
01:45 During the antiterrorist operation in Konstantinovka, Ukrainian special forces officers suffered. The Minister of Internal Affairs of Ukraine, Arsen Avakov, wrote on his Facebook, reports UNN.
00:47 In Konstantinovka are fighting for roadblocks. In Mariupol, the Ukrainian security forces stormed the building of the City Council. Mariupol included a large national armored unit on the armored vehicles. One of the representatives of the self-defense staff of the city, Mikhail Krutko, said that the storming of the City Council had begun. The situation is no less calm in Konstantinovka, where local residents are fighting for checkpoints, according to the reports of the Russian Spring. Thus, the Ukrainian authorities began a military operation against supporters of federalization.
00:32 The journalists became aware of the frightening details of how the Ukrainian military are preparing to participate in the punitive operation. It turns out that before being sent to the southeast, they are asked are they ready to shoot women. The questionnaire, in which there is such a question, was at the disposal of the online publication Life News. Soldiers are asked to evaluate their readiness to execute the command "for battle" in case "the separatists hide behind the women who support them." It is reported that every soldier is obliged to pass this test before a business trip, specifies the Russia 24 TV channel.
00:30 Andrei Parubiy promised to conduct anti-terrorist operations in all cities, "where people's lives are under threat." "After the ATO is completed in Slavyansk and Kramatorsk, we will also conduct an active phase of operations in other cities where extremists and terrorists ignore Ukrainian law and threaten the lives of Ukrainian citizens while conducting illegal activities," the Secretary of the National Security Council said. and defense of Ukraine Andrei Parubiya UNN.
00:24 Shooting in Mariupol does not subside. Users of social networks report fights in the city center and a major fire. While it remains unclear what exactly is burning on one of the streets of the city. According to one version, these are tires left on the road.
00:09 The headquarters of the supporters of federalization in Mariupol are stormed by unmarked fighters. About an hour ago, the assault on the Mariupol City Council began. The attack was launched by people in black uniforms and masks. On overalls of fighters there are no identification marks, informs ITAR-TASS.
23:53 Andriy Paruby declares that the National Guard of Ukraine prevented the capture of the military enlistment office in Lugansk. "Among our guys there is one wounded, but the attack is repelled," he said on the 5 channel.
23:50 Ukrainian special forces firing warning fire in Mariupol. Special forces units are already in the city center. "Basically, they are located in the courtyards and from there are warning fire," - told Interfax representative of the headquarters of self-defense Mikhail Krutko. He noted that unarmed citizens gathered on the main square of the city.
23:28 Ukrainian units began a military operation in the city of Konstantinovka, Donetsk region. The armored personnel carriers passed through roadblocks of the people's militia located in the outskirts of the city, said Denis Pushilin, the co-chairman of the government of the proclaimed Donetsk People's Republic, noted in a statement to the ITAR-TASS news agency.
23:26 At the Dnipro Arena stadium in Dnipropetrovsk, local football ultras gathered together to burn Odessa. More than 1 000 people celebrate their victory. Rechevki: death to the Sparks of "moskaley on knives", etc. Prepare a batch on May 9 Victory Day in Dnepropetrovsk.
23:20 Shooting is heard in Donetsk Konstantinovka. In Konstantinovka in the area of ​​the TV tower there is a battle between the Ukrainian security forces and the separatists. Eyewitnesses say that law enforcement officers landed in the city, reports the portal "News Donbass.
Ctrl Enter
Noticed oshЫbku Highlight text and press. Ctrl + Enter
We are
Riot dayReports from the militia of New Russia for 1 September 2014 of the year
Military Reviewin Yandex News
Military Reviewin Google News
339 comments
Information
Dear reader, to leave comments on the publication, you must sign in.