Washington is guilty of fascist carnage in Odessa

4 May 2014
289
In the course of the tragic event, which you wouldn’t call anything but massacre, on Friday 38 was killed by anti-government activists as a result of the arson attack on the building of Odessa trade unions, where opponents of the Ukrainian regime supported by the US and the EU were hiding, WSWS reports. 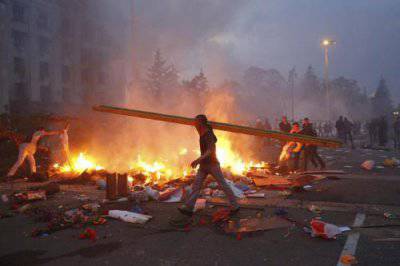 According to eyewitnesses, those who jumped out of the burning building alive were surrounded and beaten by thugs from the neo-Nazi Right Sector. it video demonstrates the beating of bloodied and wounded fire victims.

This brutality emphasizes both the brutal nature of the right-wing government, elevated to the Kiev throne by the Western powers, and the incitement of this regime by the United States and its allies to the bloody defeat of popular opposition, concentrated mainly in the Russian-speaking south and east of Ukraine.

While atrocities were happening in Odessa, US President Barack Obama at a joint press conference with German Chancellor Angela Merkel openly expressed support for the military offensive, conducted by no one elected by the Kiev government against activists occupying the buildings of state institutions in the east of Ukraine.

Despite Western media attempts to hide the events in Odessa from the public’s attention - most reports indicate that “the true nature of the circumstances is still not clear” - there is no doubt that the killings in the southern port city were organized by militants with “Right Sector” emblems ”, Occupying certain posts in the composition of the Kiev government, as well as their counterparts from the Freedom party.

The house of trade unions was set on fire by elements standing on the side of Kiev after they surrounded and set fire to a tent camp of anti-government activists that had been standing for several weeks in front of the building of trade unions. This building was set on fire as soon as several anti-government activists tried to barricade themselves.

Judging by the photo posted on Twitter, people came out of the windows of a building enveloped in flames and sat on windowsills on several floors, perhaps preparing for a jump. There are among these pictures and photos of pro-government militants celebrating this hell. Some users reported on Twitter: “Colorado beetles were roasted in Odessa” ...

Thirty bodies were found on the floor on the floors of the building - apparently, they suffocated with smoke. Another 8 man died trying to escape from a fire in a jump. According to the Ukrainian Ministry of Internal Affairs, in total, the 43 people died as a result of the events in Odessa on Friday, and 174 was injured. At the same time, 25 people are still in critical condition.

At the moment, the Odessa massacre - the last in a series of deaths since the Ukrainian regime at the insistence of the Obama administration resumed a full-scale attack on anti-government activists.

Early Friday morning and. President of Ukraine Turchinov said the destruction of many terrorists during the government attack on Slavyansk. According to the Kiev officials, the troops defeated the rebels' checkpoints, built around a city with a population of 130 000 people during an operation that started at dawn.
Despite the use of combat helicopters, the offensive was bogged down due to resistance from local residents. Early in the morning they stopped the Ukrainian troops in the area of ​​the villages Bylbasovka and Andreevka - local residents lined up in order to persuade the military not to attack.

In Andreevka, a living human chain in order to stop armored personnel carriers and trucks, formed about 200 people. In Bilbasovka residents shouted "Shame!". In neighboring Kramatorsk, people blocked the roads with trolley buses and buses in an attempt to prevent the army from advancing.

During a press conference with Merkel, Obama clung to the report that two Ukrainian helicopters were shot down from the ground by fire. He referred to the unconfirmed allegations voiced by the Security Service of Ukraine that one of the helicopters was shot down by a homing missile, calling it evidence of the involvement of Russian troops. However, in the evening, even the New York Times newspaper acknowledged that there was no evidence of the use of homing missiles.

Washington achieved the resumption of a full-fledged military operation only a few days after the Kiev regime backed down, stating that it was “unable” to stop the seizure of buildings taking place in 17 cities and towns.

And the first offensive of the Ukrainian troops last month was launched immediately after the unexpected visit of the Director of the CIA to Kiev. The second phase of the offensive started after the arrival of Vice President Joe Biden.

All this proves the constant intervention of the United States. According to the Foreign Ministry of the Russian Federation, foreigners speaking English were seen as part of the Ukrainian troops storming Slavyansk on Friday, and this confirms earlier allegations that the American military contractor, Greystone, is cooperating with the Ukrainian army.

Apparently, Washington, realizing the inability of the Kiev regime to suppress the opposition, intends to provoke a radical confrontation, and then accuse Russia of disrupting the presidential election. Meanwhile, under the pretext of participating in military exercises, American servicemen are arriving in the Baltic countries and Poland, and NATO troops are gathering along the Russian borders.

Ctrl Enter
Noticed oshЫbku Highlight text and press. Ctrl + Enter
We are
Situational analysis of the death of the MH17 flight (Malaysian Boeing 777), made on the basis of engineering analysis from 15.08.2014Artillery of the Korean People’s Army. Part of 3. Reactive systems
Military Reviewin Yandex News
Military Reviewin Google News
289 comments
Information
Dear reader, to leave comments on the publication, you must sign in.