What makes the German army in Slavyansk? 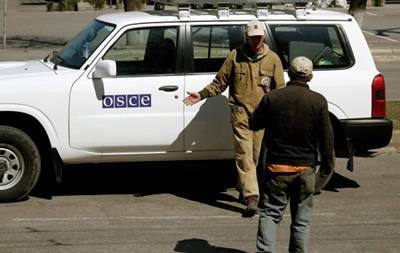 AUTHOR - PETER SCHWARZ, Secretary of the International Committee of the Fourth International, member of the international editorial board of the World Socialist Site.


Since April 25, pro-Russian activists in the Eastern Ukrainian city of Slavyansk have been holding eight military inspectors. This group of inspectors includes the 3 officer of the German army (Bundeswehr), the German translator, the 1 Czech, the 1 Pole, the 1 Dane and the 1 Swedish military inspector. The Swede was quickly released for reasons related to his health, writes wsws.org.

German media are constantly called detainees by OSCE monitors. And this is incorrect. The only connection between the OSCE and the detainees is that the presence of the latter in Ukraine is justified by the so-called Vienna Document agreed in 1992 by the 57 OSCE member states. Since then, this document has been updated several times.

However, this group did not receive approval from the OSCE for its activities in Ukraine, and this activity is not controlled by the OSCE. On the contrary, the military inspectors were instructed to intervene in Ukraine from the regime in Kiev, and they are under the direct control of their respective national defense ministries.

And this is confirmed by Klaus Neukirch, Deputy Director of the OSCE Center for Crisis Prevention. He stated that the group is participating in a bilateral mission led by the army and at the invitation of the Ukrainian government. Such inspections can be individually agreed between OSCE member countries.
In particular, the detained military observers have no relation to the OSCE observation mission, agreed by the OSCE member states, including Russia, on 21 in March. The mission consists of 500 civilian observers seconded to monitor the situation in Ukraine over the next 6 months, and they report directly to the OSCE. However, at the moment - May 1 - only about 100 members of this group work in Ukraine.

The confusion with the mission of Slavic detainees, deliberately organized by the German press, has two objectives. First, the fact of their detention is used to build up militarism towards Russia. Claiming that the pro-Russian forces are holding under arrest the mission of observers agreed by the international community, they say that Moscow is violating international treaties and conventions.

In addition, there is evidence that in this case the OSCE Vienna Document was deliberately misused by the rulers in Kiev and Berlin so as to provide them with at least some excuse for accusing anti-government activists of Slavyansk that their group acts like saboteurs.

The Vienna Document is considered a confidence building tool. It is designed to provide OSCE members, especially neighboring countries, with the ability to monitor the activities of their neighbors' armed forces, and thus reduce the risk of military confrontation. This document does not allow observing the warring forces during internal conflicts. He clearly does not allow this in the case when the country requesting such a mission takes an active part in the conflict, and this is exactly what is happening in Ukraine.

In an interview with the Bavarian Radio 23 on April, the head of the detained group, Colonel Axel Schneider, stressed that his group wanted only to “form an idea” of the state of the “regular armed forces, state armed forces” in Ukraine — that is, about her official army. He ruled out any possibility of observing anti-government rebels: “We only observe the security forces of Ukraine.”

However, based on this statement, it is impossible to explain why his group then traveled to Slavyansk, a city in the hands of the rebels and besieged by the Ukrainian army. Most likely, his group was sent there to gather information about the rebels, against whom the West-backed Kiev regime is fighting.

Even if Schneider spoke the truth, it would mean that the role of his group is to monitor the dispersal of the insurgents by the Ukrainian army, many of whose units refuse to shoot pro-Russian activists in eastern Ukraine. In any case, the role of the German and European forces in the dispersal, organized by the Kiev regime, became obvious. Colonel Schneider, assigned to the Armed Forces Verification Center and officially subordinate to the German Ministry of Defense, said in an interview that he coordinated his activities “very closely with the Ministry of Foreign Affairs”, headed by Frank-Walter Steinmeier, who played a key role in during the coup in Ukraine and providing full support to the Kiev regime.

Many details of the events in Slavyansk remain unclear, but one thing is clear: the Bundeswehr is much more active in Ukraine than it is publicly acknowledged in this.

Ctrl Enter
Noticed oshЫbku Highlight text and press. Ctrl + Enter
We are
New propaganda center of the Bundeswehr20 years after the war in Bosnia 1992-1995: rare photos of the conflict
Military Reviewin Yandex News
Military Reviewin Google News
107 comments
Information
Dear reader, to leave comments on the publication, you must sign in.