Killing is easy: who led the punitive operation in eastern Ukraine 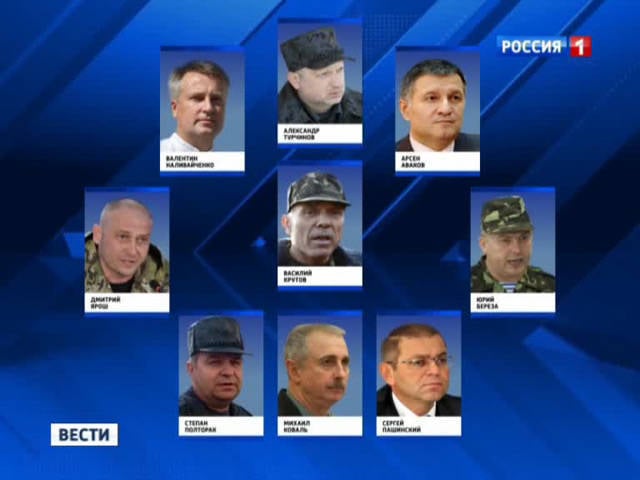 All key figures of the punitive operation in the east of Ukraine are somehow connected with Washington. Turchinov - commander in chief and part-pastor-Baptist. His immediate subordinate Valentin Nalyvaychenko is a CIA agent. Dmitry Yarosh, leader of the "Right Sector", created for the money, including American intelligence. Who are these people, why are orders given to kill their own fellow citizens so easily?

"What could a man living on earth dream of?" - Alexander Turchinov, who calls himself the new president of Ukraine, asked this question during his own sermon in a Baptist sect. And the answer for myself, it seems, has found. It was Turchinov who was one of the initiators of the armed punitive operation against the civilians of the small Slavyansk. He repeatedly said that he was ready to devote his life not to politics, but to religion, but this did not prevent him from giving the order to shoot at unarmed civilians. Turchinov was also seen during the ministry of the scandalous "Embassy of God", which experts directly associate with American intelligence.

“Turchinov came under very strong influence when he went into one of the Protestant sects, and often went to the United States to gather the so-called Church. This mass worship is absolutely sectarian,” said the coordinator of the Popular Liberation Front of Ukraine, former adviser to the Minister of Education of Ukraine Vladimir Horn.

Turchinov is subject to the current head of the Security Service of Ukraine, Valentin Nalyvaychenko, who has been leading a punitive operation since 1 in May. At the beginning of 2000-x, he was appointed Consul General of the Ukrainian Embassy in the United States, where he was recruited. US Vice President Joe Biden even called Nalyvaychenko "his man in Kiev." There is information that Nalyvaychenko even allocated a special room for CIA employees. This is confirmed by Alexander Yakimenko, from January 2013 of the year to February of 2014, who served as the head of the Security Service of Ukraine. “Indeed, the staff’s personal files were provided for the CIA study. The Maidan is not appointing these people. They are appointed by the USA. Take appointments - Paruby, Nail, Nalyvaychenko, these are all people who fulfilled the will and the will of even non-Europe. "- says Yakimenko.

The fact that Nalyvaichenko is controlled from the United States, he never hid. In the photographs from 2008, he approvingly watches as the American ambassador presents epaulettes to students of the SBU Academy. Nalyvaychenko was not shy about his fascist convictions. In the photo, he was captured with the radical leader Dmitry Yarosh about two years ago in the camp of the nationalist movement "Trident", its participants consider Stepan Bandera to be their inspiration. However, it is impossible to call Nalyvaichenko a strong commander, many military refuse to carry out orders, shoot at their unarmed compatriots.

It is not surprising that Nalyvaychenko now seems to be strengthening the ranks of the nationalist Right-Sector fascist-nationalists. It is headed by Dmitry Yarosh. “In fact, we realized the dream of the Ukrainians, the Bandera army crossed the Dnieper,” these are the words of Yarosh.

Yarosh himself does not hide: for the last 20 years, he only did what he tried to destroy the bond of the fraternal peoples - Russia and Ukraine. “Russia is a century-old enemy of Ukraine,” said Yarosh, leader of the Right Sector and candidate for the presidency of Ukraine. “And as long as the Russian Empire exists in any form, true independence of the Ukrainian people is impossible.”

"Right hand" Nalyvaychenko - General Vasily Krutov. Those who did not submit to Kiev, he promised to destroy. Krutov, according to his colleagues, came under the influence of the CIA at the beginning of his career, when he worked closely with the traitor general Yevgeny Marchuk, an American agent since Soviet times. Krutov completed internships in the United States, France, Germany and Israel.

“Krutov is a person whom all relatives and colleagues who were on Alpha called“ gorilla. ”Tough, often completely thoughtless and always wanting as much blood as possible,” says Vladimir Rogov. “He called the price tag for the events that occur in Slavyansk, Krasnoarmeysk, in the Donbas, he called 5 million dollars a guarantee for the family, leaving and obtaining American citizenship. "

Another coordinator of the punitive operation is Arsen Avakov. For the blood that spills, including, as a result of his orders, he observes on Facebook. Cruelty proud. Today, they praised that the traffic police, instead of keeping order on the roads, shot people.

The whole hierarchy of "southeastern punishers" is as follows: Turchinov is at the head, then Nalyvaychenko and Avakov are at the head, Krutov is subordinate, his orders are taken by the commander of the Dnieper 1 special unit, Yury Bereza. "Right Sector" is managed by Yarosh. The campaign on Slavyansk is led by the National Guard Commander Stepan Poltorak, Acting Defense Minister Mikhail Koval and the Acting Minister. the head of the presidential administration of Ukraine Sergey Pashinsky. He was remembered for taking a rifle from Maidan.

It is not surprising that the civilians, understanding who is behind the special operation against the people, are now preparing equipment, barricades and lead for communication with the new authorities of Ukraine.