"Black cloak" - will not arrive 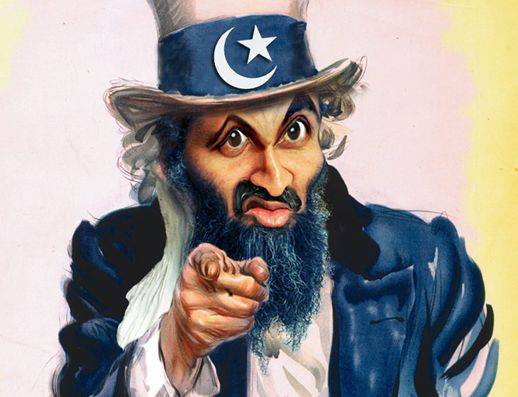 Now, any American can breathe completely calmly, no one will disturb his day and night rest, since the main world horror that flies on the wings of the night and Muslim jet warheads is Osama bin Laden, destroyed forever and irrevocably. So, at least, all the world media reports, at the same time, while bashfully silent that now all American troops in Afghanistan are simply bogged down, as they were going there once and by someone just to search for this very, now destroyed .
Despite numerous interviews with the American president, given to them in connection with so different for civilians news, and the firm assurances of the US special services that the most important terrorist has indeed been destroyed, the world’s independent thinking community has a strong suspicion that a farce has been played out before him, and not a drama.

The question is, how could Osama have been hiding for such a long time practically under the nose of the special services? According to the official version, the head of world terrorism was killed on the territory of a residential complex that is tight to the Abbotabad academy in Pakistan. The accumulation of buildings in this complex was a total of several times greater than any of the adjacent buildings, and at the same time it was surrounded by a barbed wire fence. Moreover, there was a guard around him, and this fact did not attract the attention of suspicious to all Interpol bloodhounds?

It is also suspicious that the murder of Ben Laden was announced before the results of the examination of the DNA of a man shot in the Pakistani corps were obtained. Everybody believed in the word to the militants who conducted the punitive operation and knew from the photo what the desired terrorist looks like. But from time immemorial, famous people, especially the notorious ones, always had several twins, and who can guarantee that the leader of the terrorists was killed, and not his “clone”? And the exhumation is now somewhat complicated, a place in the Arabian Sea, where the remains of the murdered in Pakistan were buried, is unknown.

Yes, and with the Arabian Sea somehow all is not well. On one site, registered in the name of a Russian supplier of fresh and reliable news, there is information, for some reason not cleaned up until now, notifying all guests of the virtual resource that Laden, or rather his remains, after the execution were taken out of Pakistan to Afghanistan, for subsequent burial in the Arabian Sea. Strangely, the situation in Sochi, through Mogochi, in the case of the desire to quickly bury a person is very annoying, because Afghanistan and the Arabian Sea are geographical points located not at all adjacent to each other. Either our journalists with a geographic map have not seen each other for a long time, or the source for receiving information was chosen unsuccessfully, or was the information provider so unreliable that such nonsense spreads? Yes, and with the dates of the operation in Pakistan there is no accuracy, according to some sources the news was fresh, according to others - it had a seven-day plowing.

The announcement of the shooting of the main terrorist coincidentally coincided with the announcement that the current US President Barack Obama will run for the post again next year, 2012. Apparently, the deliberate and accomplished murder of a terrorist should be Obama's undoubted advantage over other candidates for this post - after all, such a step was taken precisely during his time at the political helm.

In addition, the death of Osama bin Laden helped somewhat miscalculated (or not?) The US military to cover up their mistakes in the case of the death of Libyan defenseless babies during aerial bombardment by NATO rebel planes. Only the quiet life of millions of Americans after the destruction of the main problem of the United States - Osama bin Laden - can outweigh the universal justice on such an event as the death of a dozen never-before-seen children who lived, most likely, in difficult conditions and suffered more from life than rejoiced every day lived. Now, however, the American leadership will need all the strength and power, so that the fact that the Libyan leader was feeding from the hands of Al-Qaeda, or even worse, would not become the property of the press and society. Politics is still a swamp, and there is no certainty that the drowned fishing line float on world fishing is evidence of the fish on the hook, and not of a long lost shoe belonging to someone from the powerful.