American cow has more rights than any resident of Ukraine 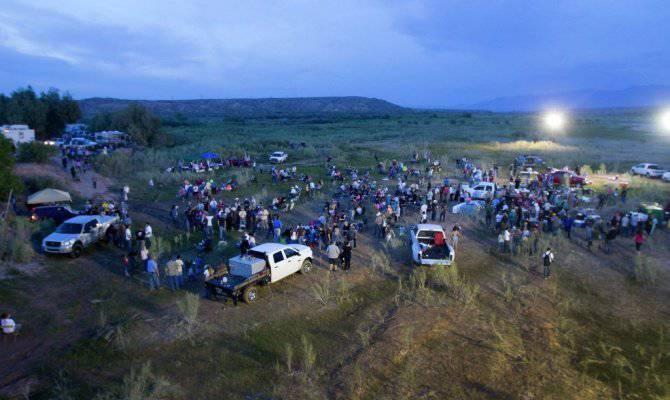 A few weeks ago in the US, in Nevada, an incident occurred between Cliven Bundy, the rancher and the federal authorities. The essence of the incident can be stated as follows. In the 90 of the last century, the federal authorities in the person of BLM (Bureau of Land Management, an agency of the US Department of the Interior) filed claims against other local farmers for grazing on state lands. Bundy then did not recognize the claim, citing that his ancestors grazed cattle here before the federal authorities appeared.

Perhaps he (the farmer) and rights. I can not judge, because it is not strong in the US legislative base. But for 20 years, Cliven Bundy’s debt to the state has grown to a million dollars! And the authorities decided to end this litigation, but unsuccessfully.

This news flew by in the media unnoticed. And who is interested in the problems of farmers in the United States, when the problems themselves are above the roof, and then every day: events in Ukraine; the tragedy of the ferry in South Korea; missing Boeing.

But here is 25.04.14, when I again saw the RIA Novosti report, dedicated to the continuation of this stories, it seemed to me: I already read something similar. Deja vu some! After reading the message again, I realized! It turns out that the state of Nevada in Eastern Europe has twin territories - this is the South-East of Ukraine!

What is happening in Nevada today? In Nevada, three weeks blocked the highway near the town of Banderville. Not only farmers and local residents, but also residents from neighboring states, former police officers, truck drivers, etc., are participating. Many of the activists are armed with American AR-15 semi-automatic rifles and AK-47 Russian assault rifles. Why not South-East of Ukraine! Here you can even draw a parallel with the Slavic.

Now the "militia" are camped near the Bandi Ranch. What they have called the event is the “Bandervill Battle” (similar to the Battle of Bunker Hill 1775 of the year during the siege of Boston during the American Revolutionary War).

But, as is often the case in the United States, I had to be disappointed. The question that armed residents decide is not a question of the safety of people and their families, but the preservation of ... ordinary cows, which the authorities decided to take from the farmer to repay the debt on the suit.

But with this striking similarity, there are two differences. And these differences defy any explanation.

2. In the US, after a few hours of confrontation, the authorities returned 350 captured cows. And not one of the Americans with Kalash was accused of collaborating with the FSB.

In Ukraine, troops entered, attracted mercenaries and informal combat units under the guise of "National Guard". Began punitive operations to suppress the people's desire to live happily. The arrests of leaders - trusted people of the population of the Southeast continued. For the presence of Russian automata (you might think there are other weapons in Ukraine), the militiamen are called FSB agents and special forces soldiers of Russia.

The question is, why such an injustice, what causes such inequality ?! Why do the US authorities present the demands of their people as a democratic process, the right to self-determination, and publicity? And the same requirements overseas are called terror, disorder, separatism? Probably because the US authorities themselves are striving for global “hegemony”, and the whole world, including a united Europe, is considered as one big flock!

Yes, it is clear that once, after the Second World War, having pulled all imaginable crowns on my head, I don’t want to take them off!

Only the position of Europe is incomprehensible! Already someone who, and Europe, has studied the new world order not from textbooks, but from its own skin. This is the tyranny of Rome, and the conquests of Turkey, and the wars of Napoleon, and the dictatorship of Hitler! Unclear! After all, Europe has only to raise his hand and shout "Heil America"!

The history of the world over the centuries never forgave a single dictator, not a single tyrant, nor those who eat the scraps from the master's table, curry favor with him! The fate of the owners and their minions was the same - deserved punishment!

The world does not recognize the concept of "chosen"! Because the people themselves are the elect! He creates and builds, he chooses, he punishes!

Although there are still those who often forget that they come from this nation. And people can ask, and not only politely, but also with passion!

There are also those who forget about the day of judgment! On the day, where there are no earthly concepts and patterns with signs of democracy, and the answer is kept there by their actions!

Ctrl Enter
Noticed oshЫbku Highlight text and press. Ctrl + Enter
We are
About Stalin and KhrushchevList of destroyed the largest and most high-tech enterprises
Military Reviewin Yandex News
Military Reviewin Google News
69 comments
Information
Dear reader, to leave comments on the publication, you must sign in.