Putin replaces the dollar: a payment system based on the gold ruble, independent of the dollar, is being formed.


Putin has been preparing for this step for a long time - to create a system of settlements in rubles, completely independent and protected from the dollar and speculation (for example, sales without coverage) of large Western financial institutions.

After the introduction of sanctions against several Russian banks to punish Putin for the Crimea, financial tycoons ordered Washington politicians to retreat. Wall Street vampires are well aware that removing Russian banks from reach does not bode well for them.

Countries such as Russia should always keep their financial doors open so that powerful financiers can periodically rob them. Washington hastily announced that the imposition of sanctions against all Russian banks was a mistake and measures would be taken only against the bank "Russia" for the edification of the rest.

Putin was just waiting for this. Since 2007, he has been trying to introduce an independent ruble financial system based on the real economy and resources of Russia, backed by its gold reserves. No more indulging in looting and financial speculation. This completely peaceful step is in fact a declaration of independence, and for Wall Street it is tantamount to a declaration of war.

In accordance with the art of judo, sanctions created an ideal situation for a defensive maneuver that redirects the opponent’s brute force against him. What is happening now. Bank "Russia" will be the first bank working exclusively with rubles.

No secret of what was happening was done. On the contrary, a huge image of the gold ruble will be installed in front of the headquarters of the Bank "Russia" as "a symbol of the stability of the ruble and its security with the country's gold reserves," a bank spokesman said.

In fact, there is an open intention to stop Western speculations that have long ruined Russia: “At the present stage of development, Russia should not depend on foreign currencies. Domestic resources make its economy impregnable for political fraudsters. ”

And this is only the beginning, said the head of VTB Andrei Kostin: “We have long gone to make the ruble the calculated currency. The ruble has long been fully convertible. Unfortunately, so far this has led mainly to negative consequences - an outflow of capital from the country and a surge of speculative foreign investment, which significantly destabilized Russia's stock markets. ”

“Russia should sell domestic products and raw materials abroad for rubles — from weapons to oil and gas — and buy foreign goods also for rubles. Only in this way will we be able to use all the advantages of ruble convertibility, ”Kostin said very clearly.

Putin himself supported the creation of a new financial system at a meeting with members of the Federation Council, noting the last doubts: “We need to protect our interests, and we will do that. Such systems work, and work very successfully, in countries such as China and Japan. They began exclusively as national ones, closed to their market, to their territory and to their population, and now they are becoming more and more popular. ” 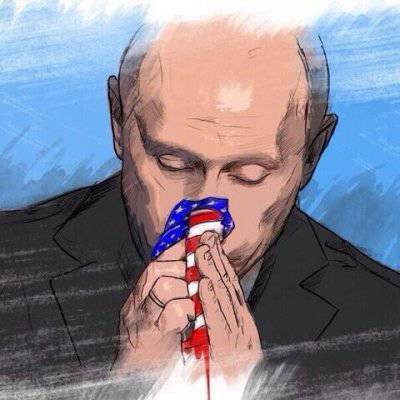 Predictions of the Golden Beetle
“Golden Beetle” - a well-known trader of the world gold market, Jim Sinclair, spoke about how Russia can destroy the US economy.

US President Barack Obama has already agreed that he considers Russia to be "a regional power that intimidates its neighbors because of its weakness, not its strength." According to Obama, Russia "is not a No. 1 threat to US security."

Well, the president, whom the Americans accuse of weakness and impotence, as opposed to Vladimir Putin, can be understood - if you can’t really do anything, then even in words you can recoup.

However, this is a characteristic feature of all politicians who are in full swing of sanctions, not understanding the economic reality of the situation. But the American financiers speak quite concretely. Russia can destroy the US economy in four financial methods.

The first blow can be inflicted on the dollar. The strength of the American national currency is based on an agreement with Saudi Arabia and OPEC countries that all contracts for the supply of energy should be denominated in dollars. Due to this, after the abolition of the “gold standard”, the dollar received collateral in the form of oil.

Petrodollar is the momentum for the US dollar. If Russia challenges the petrodollar, starts selling energy in another currency, there will be a change in momentum, and then the dollar index may decline.

The logical continuation of Russia's actions in the global financial market, and the second blow to the US economy could be the loss of American influence on Europe. If Russia starts to accept payment for energy in European currency, the US currency will fall to the euro to the level of 1,5 dollar. As a result, the rate of the European currency will rise, the cost of energy will fall, and the Europeans themselves will be delighted with the opportunity to make payments in euros.

The third blow to consumers in the United States, which will be a knockdown for Obama, will be that as a result of all these changes, the cost of gasoline in America will rise by a dollar per gallon - to 5 "bucks". Since America is a country of cars, ordinary Americans will not forgive such a government.

As a result, the United States will be forced to use payments not in the dollar, but in another currency, and this will be “tantamount to shooting oneself in the leg.” Russians can turn the American economy on its head and destroy it completely. One may wave the American flag as much as possible, but the fact is a fact - they have such an opportunity.

This is an economic nuclear bomb in the hands of Putin, which he can trigger at any time.

Apparently, it is rightly said in the market that money has no nationality, therefore financiers can be objective, unlike politicians.

According to the media,
Central News Agency Novorossia
Novorus.info