Nazism in Slavyansk takes revenge for defeat in 1945 year 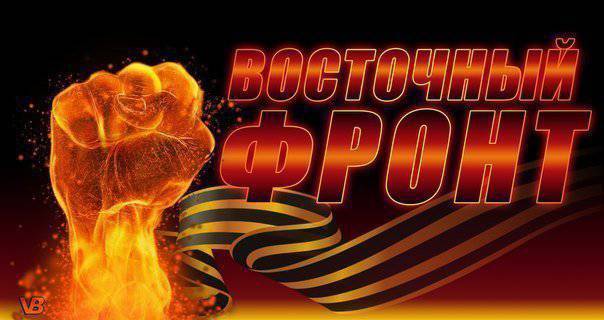 Fascists always attack in the morning. After 69 years after the Great Victory over fascism, the land of my native Ukraine is again being trampled down by a bloody fascist boot. The Kiev junta, a worthy heir to the traditions of 14 - SS division “Galicia”, a follower of the misanthropic ideas of Stepan Bandera and Roman Shukhevych in the morning of May 2 finally made its choice: by attacking the peaceful Ukrainian cities, she showed the whole world her grin.

Immediately after the February 21 fascist coup of 2014, it became clear that the junta didn’t need the democratic election of the president of Ukraine. It needs to preserve the seized power, and, following direct instructions from Washington, destroy all resistance in the South-East by any, even the bloodiest paths.

This election does not need Tymoshenko, whose protégés Turchinov and Yatsenyuk are now in power, and who are absolutely not going to share power with Petro Poroshenko or with someone else.

These elections do not need Poroshenko, Kolomoisky, Firtash and other oligarchs, who do not need democracy, but dictatorship to maintain their positions.

From which it follows an absolutely logical conclusion that the bloodshed in the South-East of Ukraine was not provoked by Russia, but by the oligarchic Ukrainian fascist clans, who have no other choice to maintain control over Ukraine by establishing a direct dictatorship.

That's who now gives criminal orders in Kiev on the use of the army against the civilian population, who is now the "face" of the illegitimate Kiev authorities and who will soon appear before the court, the new Nuremberg Tribunal ...

Turchinov, and. about. President - Gauleiter, appointed not even by the Verkhovna Rada, but by the United States of America. This is a Baptist pastor with no managerial experience. His main duty is to make an intelligent appearance and move his lips impressively, uttering words, the meanings of which he can never understand.

Yatsenyuk, and. about. Prime Minister - Assistant Gauleiter Turchinov on unclear issues. This is an amateur Scientologist, Losers, and Loser. who has no idea about economics.

Avakov, Minister of the Interior - an oligarch, punisher by nature, adheres to unconventional sexual orientation

Nalyvaychenko, head of the SBU - a CIA agent

All other leaders of the current Ukrainian political panopticon are equally miserable "outstanding" individuals.

Poroshenko - an oligarch and a fascist, who called to speak with the South-East of Ukraine only in the language of force.

Tymoshenko is one of Ukraine’s largest oligarchs, demanding the destruction of the Russians by “atomic weapons».

Yarosh is a fascist and, even more, Bandera than Tyagnibok.

Gritsenko is a slightly smaller fascist than Tyagnibok

Lyashko, the chairman of the Radical Party, is a sadist, a lover of little boys with a manic look and an endless thirst for blood.

Dobkin and Tigipko are oligarchs of a smaller scale than Poroshenko or Kolomoisky, representatives of the Party of Regions, who betrayed and betray their voters.

The remaining candidates are so insignificant that they do not deserve any mention ...

Did the junta in Kiev have any other way out than an unarmed aggression against a recalcitrant proud Donbass? It seems that no ...

The entire economic policy of the junta is only to obtain such a coveted loan from the International Monetary Fund for the purpose of its further theft. The level of intellectual development of the ruling Ukrainian circles is so low that they can not offer the population of Ukraine any more or less coherent economic policy. Simply put, they cannot give the workers of the Southeast any prospect of working and ensuring a decent life for themselves, thereby condemning them to starvation.

The junta's political program is the genocide of the Russian population ...

Could South-East of Ukraine come to terms with such prospects? Of course not ... And the Donbass rebelled.

Ukraine is like a pseudo-state entity that has no past, no present, and there will never be a future.

The only commodity for which the Kiev clique can receive money is an aggressive anti-Russian policy and the genocide of Russians. Only for this the West is ready to pay them ... And he pays.

And it is not by chance that the decision to grant 17 billions of dollars in an IMF loan was made on the eve of the attack on Slavyansk.

This is the Kiev junta's payment for the blood of the citizens of Ukraine ...

The United States and Great Britain, which brought Adolf Hitler to power in 80 years ago, have "invested" well in recent years in reviving Nazism, this time on Ukrainian soil. And now Donbas mines, in which thousands of people were buried alive, see the shadow of the swastika again.

For the whole huge “Russian world” May is the month of Victory. And May 2, 1945, is the day when Berlin, the capital of Nazi Germany, surrendered.

Thus, the attack on Slavyansk 2 in May 2014 of the year is a rematch of Nazism for its defeat in the Great Patriotic War ...

By attacking Slavyansk, the Kiev junta cut off all the ways to retreat. Donbass today is Stalingrad. And the war began ... And it will end. as in May 1945, victory ... The enemy will be defeated.