15 May 2014
9
Spain and the Netherlands several centuries ago were the leading maritime powers, but later lost their power. However, they did not lose the desire to develop their naval forces. In the late eighties, the two countries agreed to jointly develop new ships for the Navy. The joint project was supposed to create a promising landing ship dock that meets the requirements of the military fleets of the two countries.

When developing landing ships for the Navy of the Netherlands and Spain, the requirements of both sides were taken into account. In this case, the ships were supposed to have some differences due to the characteristics of their future service and the wishes of the naval command. As a result, despite the common "roots", the landing ships docks of the naval forces of the Netherlands and Spain differ markedly from each other. The Dutch project was given the designation Rotterdam-class by the names of the head ships, Spanish - Galicia-class. 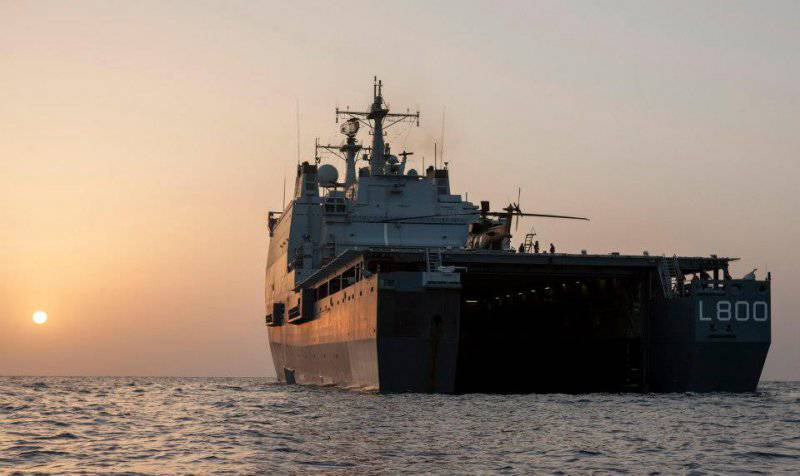 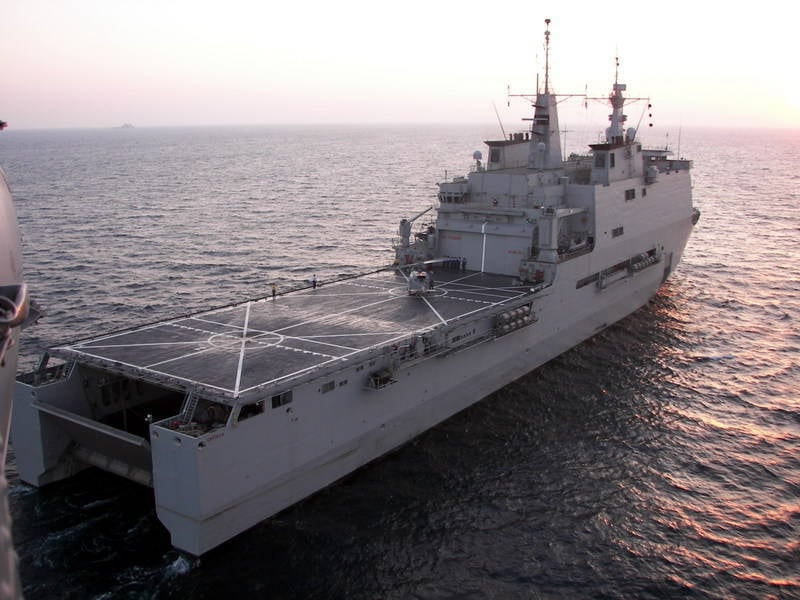 The construction of the head ships of two projects - HNLMS Rotterdam (L800) for the Netherlands and SPS Galicia (L51) for Spain - was launched at the shipyards of the two countries in 1996. The construction works were proceeding at a fairly high pace, and by the middle of 1997, the ships were launched. Approximately a year after that, the tests ended and the lead ships were accepted into the Navy of the two countries.

The main task of ships of the type Rotterdam and Galicia is the transportation of troops and ensuring the landing of amphibious landings, with which the main features of their appearance are connected. All ships built under a joint project have a similar layout. The middle and aft parts of the hull are allocated for the placement of a large dock chamber intended for the transportation of amphibious armored vehicles and landing craft. A large box-shaped superstructure is shifted to the bow of the ship. The middle and aft parts of the deck are set aside for the take-off and landing of helicopters.

The dimensions of the docking chamber, cargo decks and cockpits make it possible to transport and provide overseas landing of the Marine Corps battalion with military and auxiliary equipment. When fully loaded, the HNLMS Rotterdam (L800) is capable of carrying up to 33 main tanks or 170 armored personnel carriers. When transporting a battalion of marines, food supplies last for 10 days.

The head landing ship dock for the Royal Netherlands Navy HNLMS Rotterdam (L800) was built according to the original design, because of which it has smaller dimensions and displacement compared to the following HNLMS Johan de Witt (L801). The ship "Rotterdam" has a length of 166 meters and a maximum width of 25 m. Draft - 5,8 meters. The ship’s normal displacement is 12750 tons. 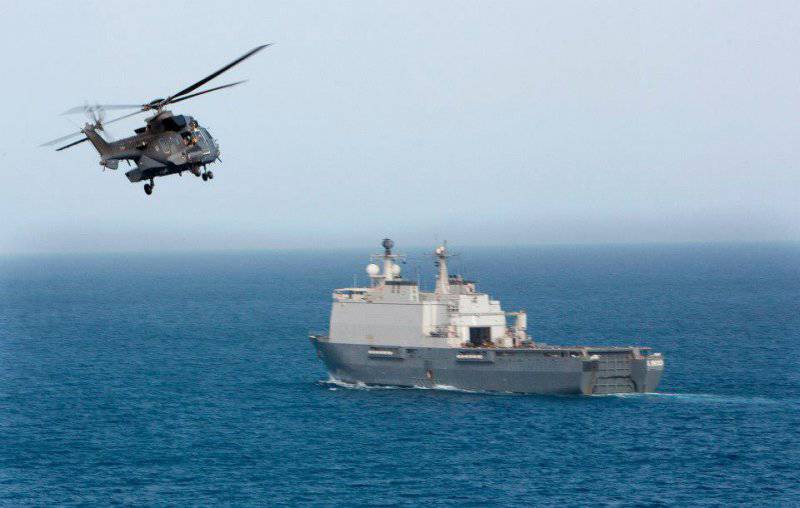 The ship HNLMS Rotterdam (L800) is equipped with a combined diesel-electric power plant. The power plant is based on four Stork Wärtsilä 12SW28 diesel generators with a total capacity of 14,6 MW. Generators supply electricity to four electric motors with a total power of 12 MW. Electric motors are connected with two propellers, two for each propeller. In the bow of the ship has a thruster. Such a power plant allows the landing ship to reach speeds up to 19 units. The cruising range at the economic speed of 12 knots is up to 6000 miles.

The crew of the ship consists of 128 people. In addition, more than 600 marines can be placed in the cockpits for the landing. 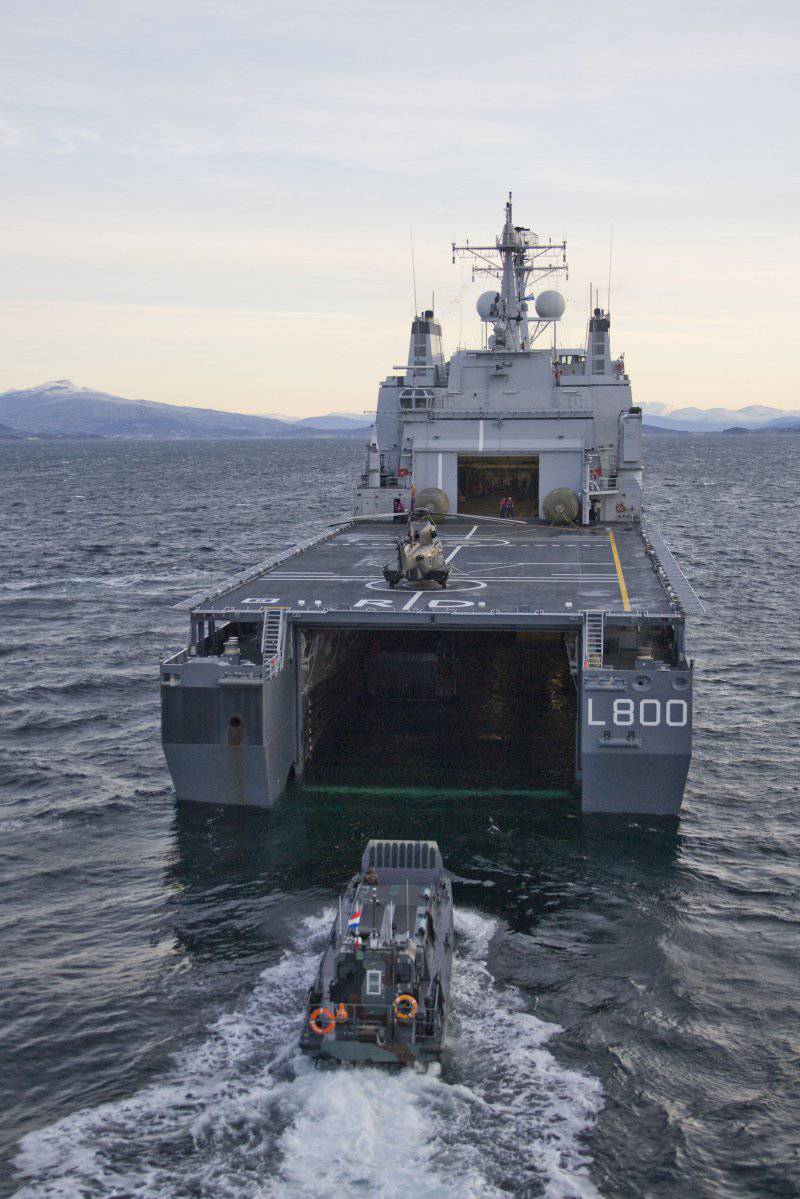 The dock chamber in the aft of the hull has a total area of ​​921 square. m. This allows you to carry up to six landing boats LCU Mk.II or up to four LCVP. For transportation of armored vehicles and other equipment, the ship HNLMS Rotterdam (L800) has a separate deck with an area of ​​903 square. If necessary, this landing ship can transport over 30 tanks or up to 170 armored personnel carriers. 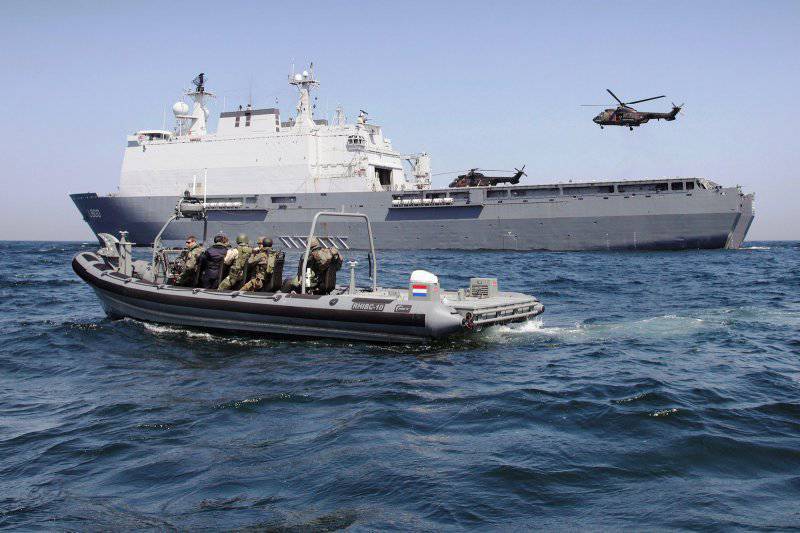 The laying of the ship HNLMS Rotterdam (L800) took place at the end of January 1996 at the KMS shipyard in Vlissingen. The ship was launched at the end of February 97, and in April 1998 entered the Royal Navy of the Netherlands. Since then, the ship has repeatedly participated in various exercises and operations. For example, in the spring of 2004, Dutch sailors participated in a humanitarian operation in Liberia.

During the first few years of service, the Rotterdam project lead ship was used not only to carry out combat training missions, but also to gain experience in operating new landing ships. According to the results of the first years of operation, the command fleet made adjustments to the list of requirements for promising ships of this class. In June 2003, the ceremony of laying the second dock ship took place, which was proposed to be built according to an updated project. 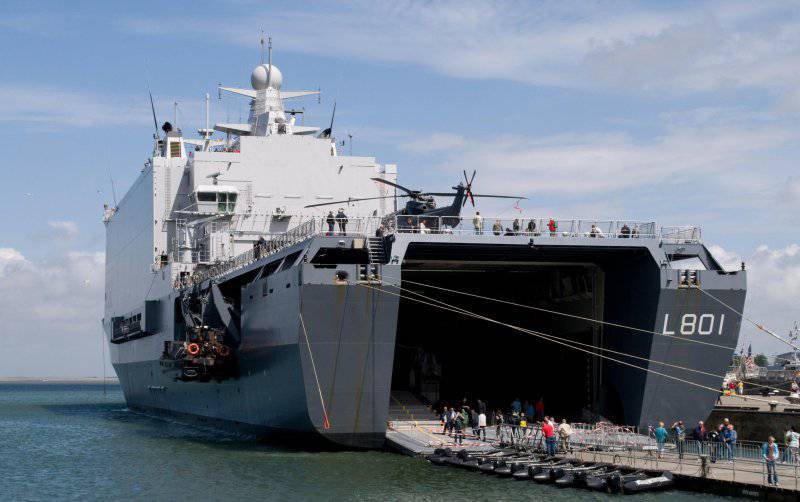 The most notable change in the project was the increase in the size and displacement of the ship. HNLMS Johan de Witt (L801) has a length of 176 meters and a maximum width of 29,2 meters. Draft decreased to 5,55 m. Full displacement increased to 16680 tons. Due to the use of new equipment, the crew was increased from 128 to 146 people.

The basis of the power plant in the updated project remained four diesel generators. Instead of electric motors rotating two propellers, it was decided to use two azimuth thrusters with electric motors of power 5,5 MW. The bow thruster in the bow of the ship remained the same. The increase in size and displacement was compensated by the characteristics of the updated power plant. The ship "Johan de Witt" is capable of speeds up to 19,5 nodes. The navigation range remained at the level of the lead ship of the project.

Significant changes were decks intended for the transport of payload. Despite the increase in ship dimensions, the navies for the marines were reduced. HNLMS Johan de Witt (L801) is capable of carrying no more than 550 fighters with weapons. The dimensions of the flight deck of the new ship are increased to 58х25 meters. At the same time, the dimensions of the hangar were increased, the area of ​​which reached 600 square. m. It should be noted that, like the lead ship of the project, the Johan de Witt can carry only six medium helicopters or four heavy helicopters. 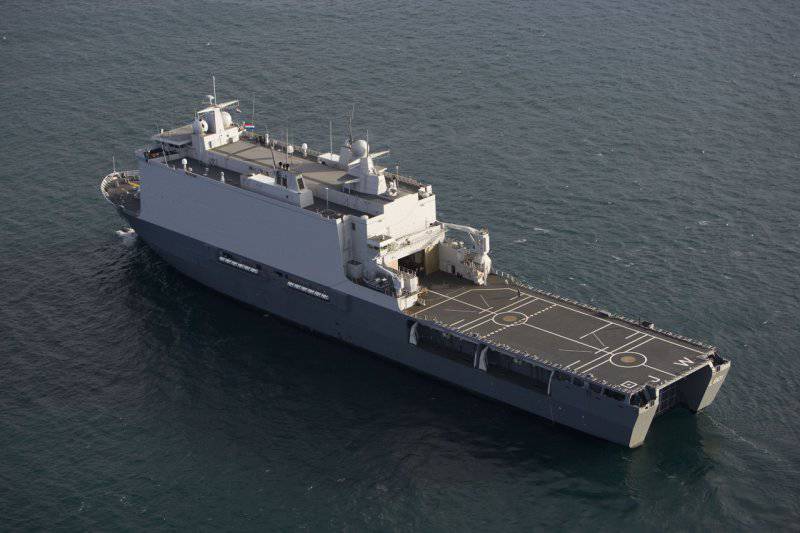 The area of ​​the dock camera was reduced to 575 square. The vacated space was given to two decks for transportation of combat and auxiliary equipment with an area of ​​960 and 1140 square. In addition, a large compartment for transporting ammunition with a total area of ​​770 square meters appeared on the ship. The cardinal processing of the internal layout of the amphibious assault ship led to a reduction in space for the assault boats. HNLMS Johan de Witt (L801) can carry no more than 2-4 boats, depending on their type. At the same time, the amount of transported equipment has significantly increased, since the area for its placement, in comparison with the Rotterdam ship, has more than doubled.

On the HNLMS ship, Johan de Witt (L801) has a command center with equipment that allows you to control the naval connection of the Royal Navy of the Netherlands or the combined naval group of NATO.

The ship "Johan de Witt" was laid in June 2003 at the KMS shipyard and launched on March 2005. Completion and testing continued until the 2007 year, after which the ship became part of the naval forces.

In 1996, the Spanish shipyard Empresa Nacional Bazán (now Navantina) began construction of the first amphibious assault ship-dock. Ships of the type Galicia (by the name of the head) are largely similar to the Dutch Rotterdam. The Spanish Navy immediately decided on their needs and therefore both ships of the Galicia type (SPS Galicia (L51) and SPS Castilla (L52)) were built according to the same project without any major changes. 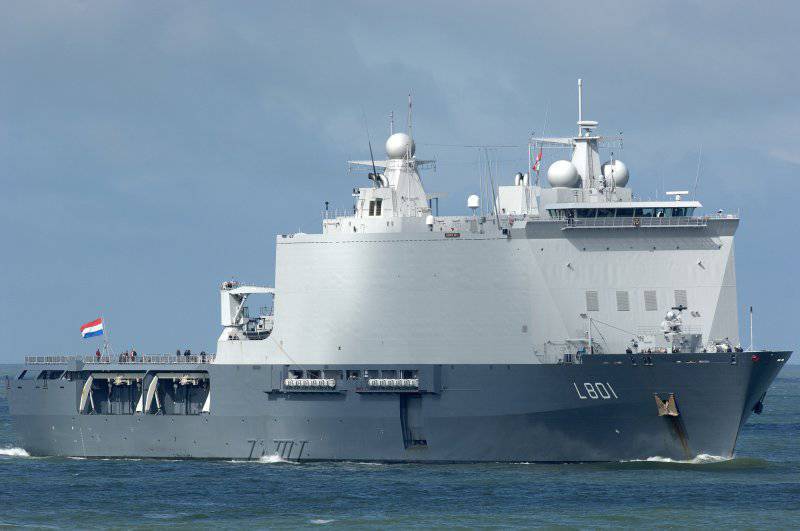 Spanish landing ships docks such as Galicia have a displacement of 13000 tons. The length of the ships is 160 meters, the width is 25 meters. The draft reaches 6,2 meters. The design of "Galicia" and "Castile" is similar to the design of "Rotterdam". The ships have a large superstructure, shifted to the bow, and a flight deck for helicopters at the stern. In the stern of the hull there is a volumetric dock chamber for the transport of landing boats of several types. There are cabs to accommodate paratroopers and decks for transportable equipment.

Galicia type ships, at the request of the customer, did not receive a combined propulsion unit using diesel and electric engines. Spanish ships use four Caterpillar 3612 diesel engines with a total power of 16,2 MW to move. Engine torque is transmitted to two shafts with propellers. This power plant allows ships to reach speeds up to 20 nodes. At a speed of 12 knots, the cruising range reaches 6000 miles. 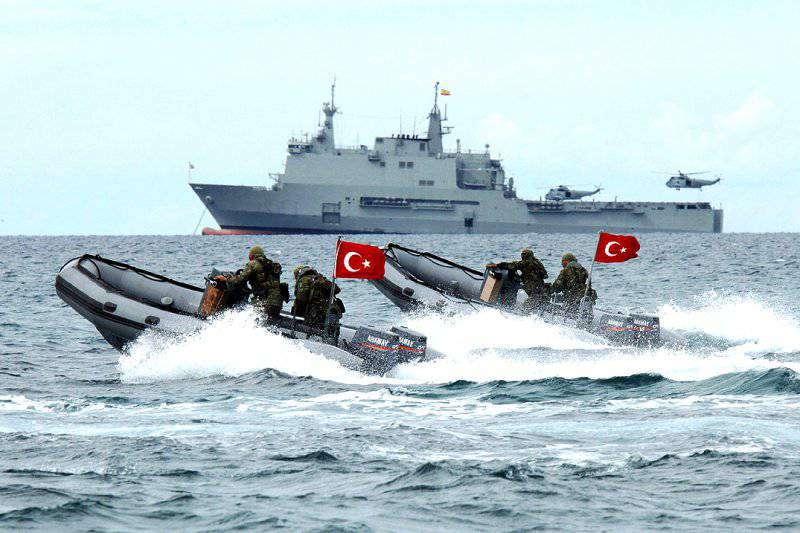 The crew of the SPS Galicia (L51) and SPS Castilla (L52) ships consists of 115 and 178 people, respectively. This difference is due to the fact that the ship "Castile", in contrast to the "Galicia", is equipped with two command centers. One of them allows you to command the amphibious operation, and the second is intended to control the ship connection. The ships have a medical unit with two operating rooms, a dental office and 10 beds for patients.

In addition to the crew, up to 540 paratroopers and 70 people from the crew can be accommodated in the cockpit of the Galicia landing ship aviation groups. Due to the large number of its own crew, Castile can take on board only 400 marines. For storage of weapons and ammunition, premises with a total area of ​​205 square meters are provided. m. Under the flight deck there is a hangar area of ​​510 square meters. m. The hangar is designed to carry 2-4 helicopters 5H-3D, NH-90 or AB-212.

In the stern of the hull there is a dock chamber with an area of ​​885 square. m. With such dimensions, it can accommodate up to eight landing boats of various types. Perhaps the simultaneous use of different types of landing craft. For transportation of combat vehicles and auxiliary equipment there is a deck with a total area of ​​1010 square. The capabilities of the ships allow us to transport up to 950 tons of equipment, i.e. around 30 tanks or 130 light armored vehicles.

The construction of the ship SPS Galicia (L51) began in May 1996. The ship was launched on July 1997, and at the end of April 98 was accepted into the Spanish Navy. The ship SPS Castilla (L52) was laid in May 1997. In June, 99 was launched, and a year later the ship began service as part of the naval forces. 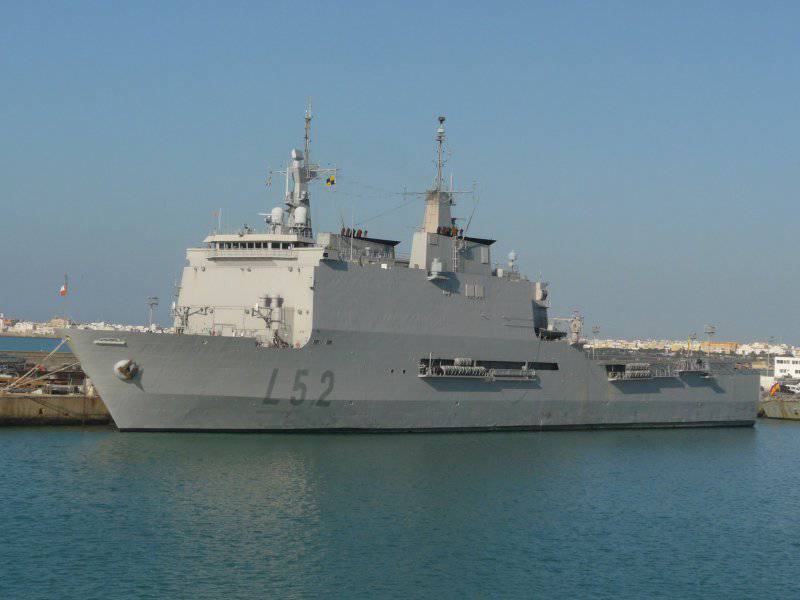 Both ships of the “Galicia” type serve on the Rota naval base in southern Spain. During the years of service, they have repeatedly taken part in various exercises. In 2010, the ship SPS Castilla (L52), equipped with command centers, became the main participant in Operation Ispaniola. January 12 on the island of Haiti, an earthquake struck. A few days later, the command of the Spanish armed forces decided to help the victims. In the shortest possible time, 4 helicopters, several boats, a mobile field hospital, engineering equipment, water purification plants and other equipment needed to assist the victims were loaded onto Castile. In addition, soldiers and intelligence officers, as well as 450 doctors, traveled to Haiti over 80. Over the next three months, the amphibious assault ship, its crew, boats and helicopters performed various tasks related to evacuating the population and providing medical assistance. 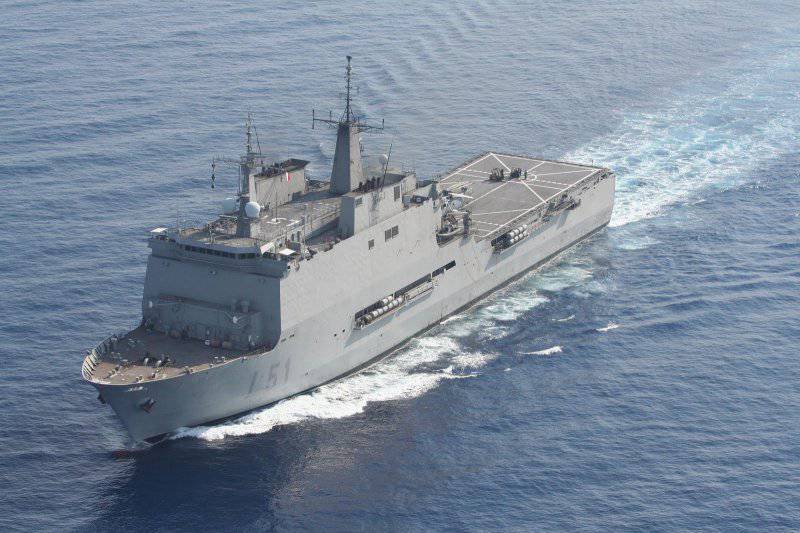