Not Russia put Ukraine on the brink of war ("The Guardian", Great Britain) 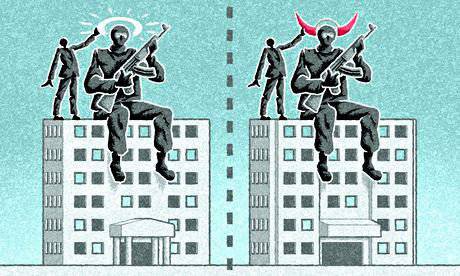 "The reality is that after two decades of NATO expansion, this crisis was triggered by an attempt by the West to drag Ukraine resolutely into its orbit ..."

The threat of war in Ukraine is increasing. The government that was not elected by anyone in Kiev stated that they could not control the uprising in the east of the country, John Kerry called Russia an outcast. The United States and the EU are increasing sanctions against the Kremlin, accusing it of destabilizing the situation in Ukraine. The White House is reportedly preparing a new Cold War-style policy with the goal of turning Russia into a “rogue state.”

It would be easier to explain if the current events in Ukraine would not be a mirror image of what happened in Kiev a couple of months ago. Then the armed protesters on the Maidan seized government buildings and demanded a change of government and the constitution. The US and European leaders supported the “disguised militants” and criticized the legitimately elected government for reprisals, and now they support the use of power, which no one chose, to use force against insurgents seizing police stations and city administrations in cities such as Slavyansk and Donetsk.

“America is with you,” said Senator John McCain, standing shoulder to shoulder with the leader of the ultra-right Svoboda party, while the US ambassador was arguing with the State Department over who would join the new Ukrainian government.

When the Ukrainian president was replaced by a US-elected administration during an absolutely unconstitutional coup, politicians such as William Hague rudely misled the parliament about what had happened. And the pro-Western government was imposed on the most excited and politically divided neighbor of Russia.

Putin snapped at tearing a page out of a street protest plan developed by the USA — although, like in Kiev, the protests that spread from the Crimea to the east of Ukraine clearly enjoy massive support. However, what was called a wonderful desire for freedom in Kiev, became “infiltration” and “insatiable aggression” in Sevastopol and Lugansk.

After the Crimeans with a significant margin voted for joining Russia, most of the Western media have forgotten even a hint of objective information. Now Putin is often compared to Hitler, and the role of right-wing forces with a fascist bias in the streets and in the new Ukrainian government is excluded from most of the reports — they consider it Putin’s propaganda.

Therefore, we do not receive information about the veneration of Nazi collaborationists and rioters by the Ukrainian government, or the burning of houses and offices of elected communist leaders, or the integration of the Right Sector into the national guard, while the anti-Semitism and ideology of white domination, praised by the extreme right-wing forces of the government, is diligently ignored, and the false reports of the presence of Russian special forces are presented as a fact.

The truth is that after two decades of NATO expansion to the east, this crisis was caused by an attempt by the West to draw Ukraine into its “orbit” and into its security structure through a clearly anti-Russian agreement on association with the EU. The refusal of the agreement led to protests on Maidan and the formation of an anti-Russian administration, which is opposed by half of the country. Despite this, the new government still signed agreements with the EU and the International Monetary Fund.

No Russian government could come to terms with such a threat from the territory that was the heart of both Russia and the Soviet Union. Putin's takeover of the Crimea and support for the uprising in eastern Ukraine is clearly defensive in nature, and the red line has already been done: at least this region will not be swallowed up by NATO or the EU.

However, the danger is increasing. Ukraine has demonstrated that it is a barely functioning state: the previous government failed to clear the Maidan, and the regime supported by the West was “helpless” against protests in the industrial east of the country nostalgic for the Soviet Union. Despite all the talk about paramilitary "green men" (most of whom, as it turned out, the Ukrainians), this uprising has clear social and democratic demands. And who will be against the referendum on autonomy and the election of the government?

Meanwhile, the United States and its European allies impose sanctions and dictate the conditions of Russia and its protégé in Kiev, advocating the use of military force against the protesters after the visit of Joe Biden and the CIA head John Brennan to Kiev. However, by what right is the United States altogether involved in this situation, revealing a “strategic umbrella” over a state that has never been a NATO member, a state whose last elected government came to power on a platform of pronounced neutrality? America, of course, does not have such a right - and therefore the Ukrainian crisis is perceived so differently in different parts of the world. There are perhaps few supporters of Putin’s oligarchic conservatism and nationalism in the world, but the Russian counterweight to US imperialist expansion is welcomed by countries from China to Brazil.

In fact, as a result of the crisis, a closer alliance can be formed between China and Russia, as long as the United States continues its anti-Chinese "turn" to Asia. And despite the increase in violence, the number of human victims as a result of mediated Russian involvement in the situation in Ukraine is still minimal compared to any significant Western intervention over the past decades.

The risk of civil war, however, is growing, and with it the likelihood of external forces being drawn into the conflict increases. Barack Obama has already sent "symbolic troops" to Eastern Europe and is under pressure from NATO Republicans and "hawks", such as Poland, who are demanding that more forces be directed (to the eastern borders of the alliance). US and British troops should take part in NATO military exercises in Ukraine this summer.

The US and the EU have already overdone Ukraine. Neither Russia nor the Western countries will want to carry out direct intervention, and the statements of the Ukrainian Prime Minister about the Third World War, as it can be assumed, are not authorized by his sponsors from Washington. However, a century after 1914, the risk of unintended consequences seems clear as long as the conflict between major powers intensifies. Efforts are now urgently needed to resolve the crisis through negotiations.

Ctrl Enter
Noticed oshЫbku Highlight text and press. Ctrl + Enter
We are
Situational analysis of the death of the MH17 flight (Malaysian Boeing 777), made on the basis of engineering analysis from 15.08.2014"Pathological liar" from the State Department
Military Reviewin Yandex News
Military Reviewin Google News
140 comments
Information
Dear reader, to leave comments on the publication, you must sign in.