News from the Ukrainian Front 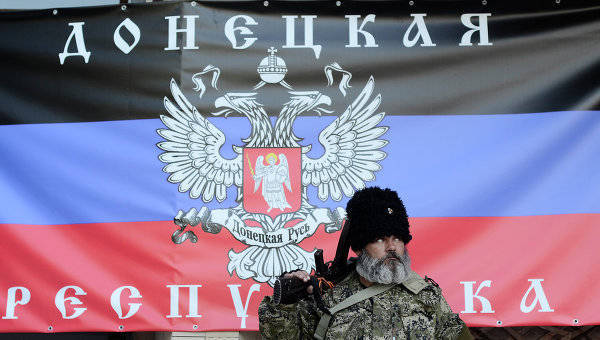 On the night of April 30, the car of the "people's mayor" of the city of Nikolayev Dmitry Nikonov was shot. This was announced on his Facebook page by the people's deputy of Ukraine Oleg Tsarev.

“At night, around 3 hours, the car of the resistance leader, people's mayor of Nikolaev, Dmitry Nikonov, was shot. Someone shot at his car’s glass at night,” writes Tsarev. He also reports that “Dmitry received more than once threats from the local“ Right Sector ”and from the so-called“ People’s Militia. ”Both pravoseki and the militia knew very well that Dmitry’s wife was driving a car, and there was no shelling at all in Nikolaev. "

As a result of the attempt no one was hurt. A criminal case has been opened, which has qualified as “property damage”. Dmitry Nikonov is officially registered as a candidate for the post of the mayor of Nikolaev in the early elections to be held on 25 May.

Activist of the movement "South-East" detained in Kharkov

The "witch hunt", which was announced by the Kiev authorities, continues. In Kharkiv, the leader of the South-East movement, Yury Apukhtin, one of the organizers of rallies for federalization, was detained.

In the morning of April 30, he was put in a car and taken away, reports "Russia 24". According to some information, this may be due to the fact that the activist participated in organizing a motor rally with humanitarian aid from Kharkov to Slavyansk.

The movement "South-East" was created in Kharkiv on March 30 at a rally of supporters of the federalization of Ukraine.

Moscow has repeatedly called on European organizations to discuss human rights violations in Ukraine, where people are imprisoned on trumped-up charges. So, in early March, the people's governor of Donetsk, Pavel Gubarev, was abducted, and he is not the only political prisoner of the Kiev regime. "Media reports give reason to talk about the beginning of the" witch hunt, "the mass persecution of dissidents, everyone who dares to express disagreement with the Maidan power," said the Russian Foreign Ministry to the OSCE.

Transcarpathian "Berkut" refused to go to Kharkov with a punitive mission

Uzhgorod “Berkut”, cleaned of non-patriotic elements, refused to carry out Avakov’s order and did not go to Kharkov without permission to suppress the protests.

This bold decision was supported by the Berkutov families, which 28 of April organized around the “Golden Eagle” base a picket. Women with wheelchairs blocked the gates of the base, saying that they were ready to block the RSA building if their demands were not heard.

The epicenter of the Galician agitprop - portal Zakarpattya -Online immediately burst into an angry article about this, stating that the Berkutovites were allegedly hiding behind their wives.

The sabotage of Kiev’s decisions on the part of the law enforcement agencies shows that the limit of legitimacy of the Kiev authorities has been practically exhausted. The interim government comes to an end.

At an extraordinary session of the Slavyansk city council, the deputies reviewed the application of the mayor Neli Shtepy about resigning from office. It was decided to transfer part of the premises in the executive building for use for the needs of self-defense of Slavyansk.

"In total, forty-two deputies attended the session, who took note of the statement from the mayor Neli Shtepy about the refusal of authority. Therefore, Shtepa officially ceased to be the mayor of Slavyansk today. There was no talk of the former mayor leaving the executive committee building delegated to the deputy mayor Oleg Tytyanin, "- leads" Interfax "excerpt from the message. Journalists were not allowed into the hall, they managed to get information about the decisions taken from several deputies present at the session.

The issues of concluding an agreement on the transfer of the use of part of the premises in the executive committee building for the needs of self-defense of Slavyansk were considered. The deputies also approved the coordination council of the city, which was headed by the first secretary of the local branch of the Communist Party, Anatoly Khmeleva.

Ukraine expels the naval attache of the Russian embassy

“On April 30, a Russian diplomat was detained by the Security Service of Ukraine at the scene of an undercover action,” the message from the Ukrainian Foreign Ministry said.

Ukraine declared persona non grata the naval attache of the Russian Embassy in Ukraine in connection with "its activities incompatible with diplomatic status, in accordance with the Vienna Convention on Diplomatic Relations of 1961," the Foreign Ministry of Ukraine reports.

"April 30, a Russian diplomat was detained by the Security Service of Ukraine at the scene of an agent's action. In the near future, the diplomat must leave the territory of Ukraine," the report said.

Media: Kiev has weakened the military onslaught, having heard the opinion of illegitimacy

Kiev is forced to curtail a military offensive in the rebellious east, because at least half of the population of the regions covered by unrest does not consider Oleksandr Turchynov to be the legitimate head of state, writes the American The Christian Science Monitor.

A survey of the Kiev International Institute of Sociology spread by the Ukrainian media, which showed an ambiguous attitude towards the seizure of administrative buildings in the east of Ukraine, also revealed that more than half of the respondents consider the elected Verkhovna Rada to act as President Alexander Turchinov "illegally occupying his post", reports The Christian Science Monitor. The sentiments shown by the poll probably became the reason why Kiev decided to weaken the so-called counter-terrorism operation using the army in the south-eastern regions of Ukraine, suggests publication.

Similarly, they refer to the appointed by the Verkhovna Rada of Ukraine, Prime Minister Arseniy Yatsenyuk, who was called "illegitimate" by a little less than half of the respondents.

In the Donetsk and Lugansk regions, these figures are even more eloquent. The provisional government in Kiev is not going to recognize 74% of Donetsk residents and 70% of Lugansk. In addition, the majority of respondents advocate the expansion of regional powers and the replacement of the procedure for appointing governors by local elections.

Oleksandr Turchynov, who was entrusted by the parliament of Ukraine with the duties of the president, 30 of April acknowledged that security agencies today are not able to quickly take control of the situation in the Luhansk and Donetsk regions.
Ctrl Enter
Noticed oshЫbku Highlight text and press. Ctrl + Enter
We are
Reports from the militia of New Russia for 2 September 2014 of the yearReports from the militia of New Russia for 29 August 2014 of the year
Military Reviewin Yandex News
Military Reviewin Google News
35 comments
Information
Dear reader, to leave comments on the publication, you must sign in.