Lavrov: the authorities in Kiev are not interested in investigating the death of people on Independence, the United States themselves have denied the presence in Ukraine of saboteurs from the Russian Federation 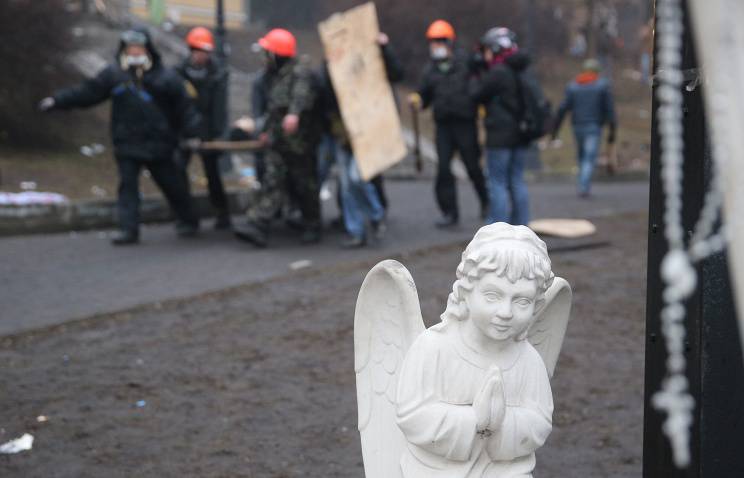 The current authorities in Kiev are not interested in identifying the true perpetrators of the deaths of people on Independence Square in February 2014. This was stated by the Minister of Foreign Affairs of the Russian Federation Sergey Lavrov after a meeting with the head of the Ministry of Foreign Affairs of Chile, Heraldo Muñoz, reports ITAR-TASS.

“The main victims were in February on the so-called Maidan,” the Russian minister said. “The cause of these victims was unrest, violence that was unleashed by opponents of the government, relying on ultra-radicals like the militants of the Right Sector and the like.”

“There are many eyewitness accounts and other independent sources, according to which these militants, who, among other things, attacked the unarmed Molotov cocktails, blamed for these victims, for killing people,” Lavrov said. “Unfortunately, the investigation of these crimes, including the well-known“ case of snipers, ”is rolled up and those who came to power in Kiev as a result of a coup d'état clearly do not want the truth to be established,” the minister stated.

On the detention of military observers

Lavrov confirmed that he had received a proposal from the acting Foreign Minister of Ukraine, Andrei Deschitsa, to hold a telephone conversation.

"As for the request for a telephone conversation with Andrei Deshchitsa, he entered when we flew to Havana," the minister said.

"I didn’t know what topic he wanted to talk about, and if we are talking about the detained military observers of European countries in Slavyansk, I can say the following: they are on the territory of Ukraine according to a procedure that did not involve consultation with us or with any other countries that are not interested in sending their military observers there. There is such a procedure. A country that would like independent experts to be convinced of the absence of military activities, invites, and willing states send their experts in "- Lavrov added.

“We call for the release of observers, but we cannot decide for the“ people's militia. ”These people are under constant threats from Kiev, that army units, armored vehicles will be used against them, under constant threats from extremists”, - said Lavrov. According to him, OSCE military observers worked in the area of ​​the Russian-Ukrainian border, and "nothing that would indicate any dangerous military activity on Russian territory does not follow from their report."

Members of the delegation of military observers from OSCE member countries Axel Schneider (second from left) and Yngwie Thomas Johansson (right), who were previously detained

Lavrov noted that the Kiev authorities invited the monitoring mission to monitor the border. "Why did they take the observers from Europe to Slavyansk, I do not know," he said. According to the Russian minister, the Ukrainian escorts could not be unaware that the situation in Slavyansk was controlled by self-defense detachments, and the trip there needed to be coordinated with the activists of the “people's militia”.

The Minister stressed that even in less dramatic situations, OSCE observers are not always allowed to go where they plan to go. For example, monitoring missions were not allowed into some US states when elections were held there. “We call for the release of these European officers. They, in my opinion, were simply set up. We should not take the example of the Kiev authorities, who seize public figures for political reasons and, despite their commitments to the Geneva statement, refuse to let them out of jails” said the head of the Russian Foreign Ministry.

Washington's opinion on the impact of sanctions

Statements that Washington’s sanctions led to the absence of Russian troops in southeastern Ukraine reflect the US desire to demonstrate that they are decisive and achieve results. Moscow knows such methods, but Russia does not use them, Lavrov said.

"If the statements that because of the sanctions in the south-east [of Ukraine - ITAR-TASS comment] there are no Russian troops, reflect the desire to somehow send a signal that the US is decisive and achieve results, we know such methods “We don’t use them,” Lavrov said, commenting on relevant statements made by US Secretary of State John Kerry in an interview with the American media. “If he says that, then God will judge him."

According to the head of the Russian diplomatic mission, statements that Russia did not send troops to the south-east of Ukraine, in fact, denied denial sounded from Washington that this part of Ukraine was allegedly flooded with Russian saboteurs and members of the special services.

"We have never taken any action under pressure of anyone. We act on the basis of the national interests of the Russian Federation on the basis of international law and taking full account of the situation - as with the Crimea, it also happens in terms of our position on what is happening in the south-east of Ukraine ", - said Lavrov.

US allies may be partners of Russia

The idea that US partners cannot interact with Russia is incorrect, says Lavrov. “We cannot proceed from the logic that if someone is an ally of the United States, he cannot be a partner of Russia, and vice versa,” said the minister. He noted that Washington, for example, wants to work with members of the Collective Security Treaty Organization (CSTO), which are partners of the Russian Federation.

Commenting on the Chilean journalist’s question about whether the Russian minister’s Latin American tour is a response to the US’s actions against the Russian Federation in connection with the crisis in Ukraine, the head of the Russian diplomacy said that the very question was wrong. “Even answering him [question - ITAR-TASS comment] has nothing, he relies on a misunderstanding of the situation and a misunderstanding of Chile’s policy in international affairs,” Lavrov said. As the Russian Foreign Minister noted, the relations between Moscow and Santiago are valuable in themselves, which was confirmed by the meeting with the President of Chile, Michelle Bachelet.

“Unfortunately, the information machine of our Western colleagues is working at full capacity,” Lavrov said. “This is a refraction of public opinion — the Americans want to create it, and they want to create it because their concern is not primarily the fate of Ukraine, but the desire to prove that as they decide, it should be always and in everything. "

“This is an obsolete mentality and obsolete logic, with which the Americans will not go far and have, in general," stalled, "Lavrov stressed." Hence, from this indignation, and sanctions, which, by and large, are meaningless. " "We are not going to monkey and at this stage we still want to give our partners a chance to calm down, - the minister said. - We will see further. If absolutely baseless notations on Russia continue, if there are attempts to use economic leverage against us, then we will understand the situation additionally".

"Than to get involved in sanctions, it would be better for our overseas colleagues to discipline those whom they brought to power - those who declared themselves winners of the democratic revolution, and immediately overthrew the legitimate president, breaking the agreement from 21 February. Parliament does not fulfill any of those obligations and relies on a coalition that includes outspoken radicals, extremists who were condemned by the European Union back in the 2012 year, when Svoboda’s party first went to parliament, ”the Russian Foreign Minister said.“ Now this Europeans are shy ie recall and co-operate essentially with these people. "
Ctrl Enter
Noticed oshЫbku Highlight text and press. Ctrl + Enter
We are
A great interview with Sergey Lavrov: about Ukraine, Obama and IranInterview of Russian Foreign Minister S. V. Lavrov to Bloomberg TV Channel, Moscow, May 14, 2014
Military Reviewin Yandex News
Military Reviewin Google News
29 comments
Information
Dear reader, to leave comments on the publication, you must sign in.