Speech Turchinov: Ukrainian government has lost control over the situation in the Donetsk and Lugansk regions and is taking measures to stabilize the situation 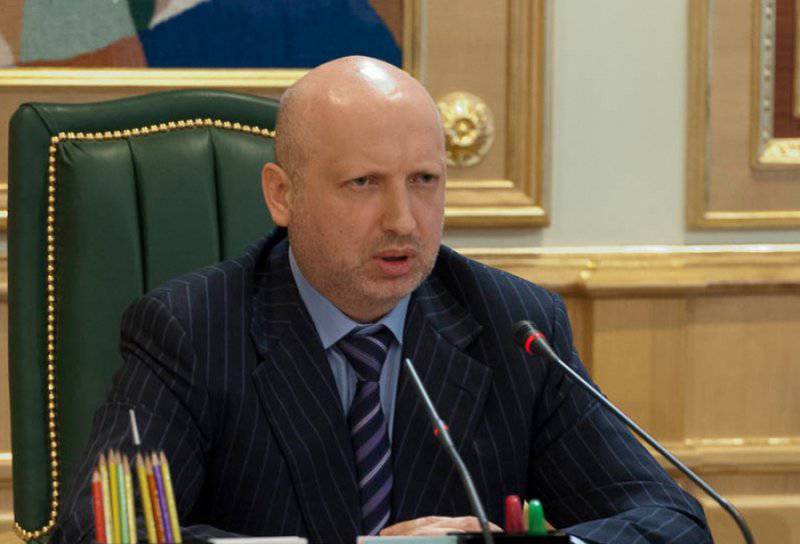 30 on April and. President A.Turchinov held a meeting with the chairmen of regional state administrations, which was also attended by the leadership of the Security Service of Ukraine, the Ministry of Internal Affairs, the Ministry of Defense, the General Staff, the Foreign and Military Intelligence Service, the General Prosecutor's Office and the Central Election Commission.

In his speech at the meeting, A.Turchinov described the general situation in the South-Eastern regions of Ukraine, acknowledged that control over the situation in the Donetsk and Lugansk regions was lost, spoke about the reasons for this and the measures that will be taken to stabilize

"We are working during not only a very difficult, dangerous economic situation, a crisis that covers almost all sectors and areas of the economy. We are working during a time when tough and cynical aggression of the Russian Federation against our country occurs: the occupation of the Autonomous Republic continues The Crimea, due to terrorist and sabotage groups, which, unfortunately, are supported by a part of the separatist-minded population, has destabilized the situation in the Donetsk and Luhansk regions. And it’s no secret that The northern, eastern and southern borders of Ukraine continue to concentrate the armed forces of the Russian Federation, which are ready to invade our territory.

Especially dangerous situation has developed in the east of Ukraine - in Donetsk and Lugansk regions. In Lugansk, seized the building of the SBU, prosecutors, RSA. At night, today, all attempts to capture the Office of Internal Affairs are reflected through clear actions by units of the National Guard. Attempts to seize buildings in other cities and towns of this region are also blocked.

Especially difficult situation in the Donetsk region. In the city of Slavyansk groups are concentrated, which are fully coordinated by the Russian Federation. These are terrorist and sabotage groups. They kill people, take hostages, use not only automatic weapon, but also heavy weapons - machine guns, grenade launchers, etc.

In addition, administrative buildings are seized in many cities of the Donetsk region and in Donetsk itself is controlled by the RSA for a long time, and today the authorities in this city do not control the situation, as well as in part of the territory of the Donetsk region.

I want to say honestly that today the security forces are not able to quickly take control of the situation in the Donetsk and Lugansk regions. What are the reasons for this?

The main reason, of course, is that the security agencies themselves - the units of the Ministry of Internal Affairs and the Security Service of Ukraine - in these regions, primarily in the Donetsk and Lugansk regions, are not capable of fulfilling the duties assigned to them to protect citizens. They are helpless in these matters. Moreover, some of these units either contribute to or cooperate with terrorist groups.

The next problem is a fairly large number of local people, deceived by Russian propaganda, which supports terrorists and contributes to the seizure of administrative buildings and destabilization of the situation in the region.

We know that in the presence of a sufficiently large number of people, force measures are not effective. This is exactly the situation that our security agencies faced. I do not condone their inefficient activities, but the problems that we have in these regions affect the fact that my tasks to completely localize terrorist groups, to destroy terrorists, have not yet been fulfilled.

Of course, the difficult economic situation, especially worsening in these regions due to the destabilization of the situation, also leads to the fact that unemployment brings many dissatisfied people to the streets.

Therefore, the first task that confronts us, the heads of administrations, the entire vertical of our government, of course, first of all, is before the security agencies - to prevent the spread of the terrorist threat to other regions of Ukraine.

Today, there are attempts to destabilize the situation in Kharkiv, Odessa, Dnipropetrovsk, Zaporizhia, Kherson, and Nikolaev regions. And I thank the heads of administrations, I thank all the patriots of Ukraine, the security forces who keep the situation and block the spread of danger on the territory of our country. But the task of attacking precisely these regions has been set before mercenaries, saboteurs, and special forces that operate on the territory of Ukraine. And therefore, I emphasize, our task is to prevent the spread of the terrorist threat to these regions. First of all, Kharkov and Odessa regions. This is a task that will be monitored by me personally.

We predict sabotage attempts, - according to our intelligence, according to the Security Service, which may be. But our task is not to sow panic, but to localize these threats, to remove this danger. And this task today is number one.

The next problem I already mentioned is that we will not be able to talk about stabilizing the situation in the Donetsk and Lugansk regions until the power vertical in these regions has been completely updated. In the first place, the structure of the Ministry of Internal Affairs and the Security Service of Ukraine.

We have already replaced the heads of the SBU in the Luhansk and Donetsk regions. By the way, the management of the special division "Alpha" was completely replaced, which did not work to fulfill the assigned tasks. But this is not enough. I stress once again that we must update, in fact, completely update all the structures and units of the Ministry of Internal Affairs and the Security Service of Ukraine in these regions.

And again yesterday in my address, and today I want to repeat - we are addressing real patriots who do not sow panic on the Internet, do not show heroism in the media or at rallies, but are really ready to defend their country. We invite, first of all, residents of these regions, especially those who served in the units of the Ministry of Internal Affairs, the SBU, those who served in the Armed Forces - to go and work in the police and SBU. To go and protect the citizens who today were left defenseless in the face of the terrorist threat just as we mobilized volunteers to the National Guard and the Armed Forces of Ukraine.

Without restoring the normal, professional work of the departments of the Ministry of Internal Affairs and the Security Service of Ukraine in these regions, we will not be able to bring the situation under control. This task, in which I would ask for cooperation of both the leadership of the ministries, and, of course, the leadership of the administrations.

Moreover, we understand that this is not enough, and that is why today we are forming special units of the Ministry of Internal Affairs and the National Guard, which are already stationed in regions where there is a real danger of destabilization. These are the areas that I called Donetsk, Lugansk, Kharkov, Odessa, Dnepropetrovsk, Zaporizhia, Kherson, Nikolaev. It is these units of the Ministry of Internal Affairs that should, together with the National Guard, provide support for the actions of security forces in the fight against terrorists, saboteurs, organized criminal groups, protect our citizens from them.

At the same time, I once again return to the real danger of the Russian Federation unleashing a continental war against Ukraine. Our Armed Forces are in full combat order, in full combat readiness.

But in order for us to have the opportunity not only to speak with slogans, not only to call for opposition, but also to really counteract, practically all regions of Ukraine should be involved in this process.

Yes, today we will rely not so much on those who were taught to fight, who receive a high salary for it, we will rely on patriots, on real citizens of Ukraine. Who today are ready to defend Ukraine with arms in their hands. Not to sympathize, not to shout, but to act and protect. Therefore, in these matters there should be a clear interaction between the Ministry of Defense, the General Staff, our regional and local administrations.

The next problem that must be solved, and this is our duty to the Ukrainian people - we must stabilize the Ukrainian government. This can happen only after holding fair, transparent presidential elections and nationally electing the President of Ukraine.

Actually, realizing that this is a very strong factor in the stabilization of Ukraine, the Russian Federation and its political leadership, those who work against our state, are trying to do everything to disrupt these elections. But the presidential elections in Ukraine will take place, as required by current legislation, 25 May this year. Very little time is left, and, of course, the work of organizing these elections rests entirely with the responsibility of the leadership of the regional administrations.

Security forces and leaders must ensure the security of these elections, thwart plans to disrupt the electoral process, and protect the right of our citizens to choose. They must choose the President they trust.

We must ensure with you all the technological aspects of the electoral process. This question of the preparation of the premises where the elections will take place is an aid in organizing the work of the election commissions. There are many questions here, but despite the problems, these issues must be resolved and resolved.

Of course, we understand the difficulties with conducting the electoral process in the Autonomous Republic of Crimea, and it is precisely the proposals for this that will also be submitted to the CEC.

I also appeal to the heads of power structures, to the heads of administrations - we want these elections to be fair, transparent, democratic, and everyone should take part in these elections. You can travel around the city of Kiev, across other regions — there are more opposition billboards or opposition candidates billboards and citylights than those who support the majority coalition in parliament. This is normal.

Our task is to give candidates the opportunity to conduct electoral campaigns, and citizens - to calmly and carefully make their choice. Without pressure.

I draw the attention of the leaders of the security forces to the prevention of provocations - terrorist and military during campaigning, and especially during the conduct of the elections themselves. This is directed by sabotage terrorist groups, but your task is to prevent this.

We must have in each oblast a working group composed of the leadership of the regional administration, the head of the SBU, the department of the Ministry of Internal Affairs, whose responsibility we fully assign to the implementation of the election process. I emphasize - the organization! Not the influence, not the pressure, but the organization of the electoral process and preventing its breakdown.

I am convinced that Ukraine will elect a decent President, and without panic, without hysteria, we will stabilize the situation, including in Donetsk and Lugansk regions. ", - said A. Turchinov. (Press Service of the Verkhovna Rada of Ukraine)

Ctrl Enter
Noticed oshЫbku Highlight text and press. Ctrl + Enter
We are
Military reform as an integral part of the security concept of the Russian Federation: Systematic dynamic assessmentOleg Valetsky about the wars in the Balkans, their causes and Russian volunteers
Military Reviewin Yandex News
Military Reviewin Google News
49 comments
Information
Dear reader, to leave comments on the publication, you must sign in.