What is in common between the singer Ruslana and Secretary of State Kerry? 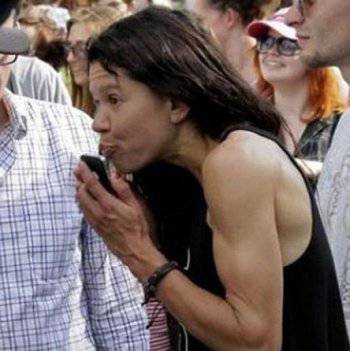 I vaguely recall the events of 70, when my father and grandfather were discussing the concluding war in Vietnam, and hardly remember what they said about her on TV. Naturally, I don’t remember what was written in Soviet newspapers and especially in Western ones, but I had a memory of how Vietnamese appeared at the junction of 70-80, and most of them were former soldiers and officers. armies Ho Chi Minh. They came to the USSR to study. I remember an adult (as it seemed to me then) 20-year-old boy, who put an officer's uniform with the order of the Golden Star on some holiday, I remember a girl with her face and hands burnt with napalm ...


And today's US secretary of state John Kerry was on that war from the other side. For four years he commanded a riverboat in Vietnam, after the third injury he was demobilized and even participated in the anti-war movement. Here is a great fellow.

But for the time being, Mr Kerry seems to have forgotten something. And its anti-war past after receiving a good beating, and the fact that it was his country that provoked the confrontation in Ukraine, which is about to lead to a civil war.

And to blame for this - guess who?

"Russia seeks to change the security landscape in the eastern and central regions of Europe. Events in Ukraine are a warning ",- said Kerry, speaking at the Research Center - Atlantic Council.

One might think that this is Russia, by means of billions of dollars in financing Ukrainian propaganda, is trying to change the consciousness of Ukrainians since childhood, introducing false information and assessments into the system of our education. What is Russia, 20 has for years been approaching the borders of the EU by joining its military bloc of new members and is building such a missile defense system that leads to an arms race.

"In fact, Russia has further exacerbated the conflict. There are serious evidences, as I said a few days ago that Russia is directly involved in the events in the east (Ukraine), this involvement has intensified over time. ”- continued Kerry.

This evidence has already been seen. Especially popular for evidence was the mention of a local militiaman with a beard, who was allegedly seen before in Chechnya, Georgia, and even in the Third Age of Middle-earth.

What we didn’t see exactly under Kuchma and Yanukovych was that the head of the FSB, the deputy prime minister or even the prime minister of Russia came and led the Ukrainian state, and even without concealing it.

And now the three-time wounded former anti-war activist, who has become the US Secretary of State again, like his predecessors, is trying to provoke a full-scale war. In principle, he even blurted out why Russia is so annoying to the West.

"If we want Europe to be whole and free, we must together and immediately take additional steps and ensure that European countries will not depend on Russia for obtaining most of their energy resources. "

Naturally, it would be better for everyone that the Russian Federation not only did not independently control the extraction of hydrocarbons, but also would not have control over their transportation. It is better to have this consortium of transnational corporations doing this. It is also desirable that peacekeepers under the aegis of the United Nations as part of the United States Marine Corps and the Bundeswehr would observe this. One could also attract the Foreign Legion. And do not even doubt that these are the most intimate aspirations of the "civilized West."

But even in the United States itself, the murmur is rising, turning into the most unpleasant debate. Already, many regular readers, even mainstream media, journalists and bloggers are wondering - "God, if Kerry would become president at one time - what would happen to the country." Compared with him, even the image of George W. Bush fades.

"Together, we must make absolutely clear to the Kremlin that the territory of NATO is inviolable ... In order to move in a positive direction, these efforts must affect the entire alliance," - today he also said that.

Who was going to attack the NATO countries? By the way, the very same union, which logically should have ceased to exist after the collapse of the Warsaw Pact.

Kerry also demanded that European countries increase military spending. And even went into the course of a reminder to Mr. John Kerry about his glorious past.

This journalist did today Robert Perry: "When Kerry was young, he was sent to the Vietnam War. This was done by old people who lied to the nation because of ideological errors, political considerations or personal pride. Now, John Kerry himself has become such an old man, either divorced from reality, or he who considers himself right to lie to the American people exactly like those who sent him and many other young Americans to the bloody jungles of Vietnam almost half a century ago. "

It would be worth remembering that it was his anti-war speeches in 70 that played their part in losing to the presidential company 2004 of the year. Moreover, in a very interesting perspective - from it the "patriotic organizations" made ... a traitor. His team did not consider it necessary to respond to the mud-spraying of its boss, because it did not want young Kerry to reiterate about the slaughter at Songmy, the event that began the birth of a protest against the Vietnam War in the US. This is in the United States prefer not to remember.

Just as now you hardly read in the American media any references to Libya, in which the flowering country into ruins was transformed by the forces of the State Department. And in the case of the civil war in Ukraine, unleashed with the help of the State Department’s theory of "controlled chaos", in five years they will tell that Putin personally arranged this war, and the United States were completely out of business there.

What, however, some Ukrainian especially gifted personalities already say. It is striking in its alternativeness, for example, the leader of the movement "Dicky Tanzi on Independence" Ruslana Lizhichko. Here who precisely knows everything and understands. It was she who shouted that “whoever doesn’t jump - that Moskal”, and called to seize and block the buildings.

She considers such actions in the Donbas to be illegal by a veteran of the building seizure group. Lyzhichko can in no way draw parallels between the legality of the stay of people in the Kiev city administration and the Donetsk Regional State Administration. First, in her opinion, the demand for justice led there, and secondly, Putin for hands.

“I can’t more tolerate the success of Putina over Ukraine. I can’t hurt what I want in Ukraine, but I don’t have enough money back! I rushed to fight and fight and I’m no way out, but I’m not going to do anything, but I’m not so lucky! I am writing to the team that represents the head symbol of svіtla ili forced people. I vikonuyu Chergov sensation version of the Great Britain Ukraine "- (I can not tolerate Putin’s mockery of Ukraine. I can’t understand who is helping Putin in Ukraine and why these people still no one stopped. I have no way back! I want to go to the end. Ukraine is good! I am proud to present the main symbol of light and the power of people today. I will perform another sensational version of the Anthem of Ukraine ”) Ruslana wrote these piercing phrases in her blog and went to the forum today and future Euro-Atlantic relations in Washington.

I hope that the sensational version of the National Anthem of Ukraine will be approved personally by John Kerry, the former anti-war leader, whose efforts Ruslana’s beloved Ukraine plunges into chaos.