70 years ago was established medal "For the Defense of Moscow"

1 May 2014
14
Exactly 70 years ago, 1 May 1944, in the Soviet Union, was established a new state award - the medal "For the Defense of Moscow". The author of the sketch of the medal was the artist N. I. Moskalev. This award was one of the most massive in the Soviet storiesIn total, as of 1 in January of 1995, approximately 1 028 600 people were awarded. In this case, the medal "For the Defense of Moscow" could be awarded to all participants in the defense of the city - the military, the NKVD troops, civilians and partisans of the Moscow region. Also, this award was presented to the heroic defenders of the hero-city of Tula.

What caused the fact that the medal "For the Defense of Moscow" appeared only in 1944 year, we can only guess. At the same time, the battle for Moscow became the prologue of a future victory in the war. She clearly showed that the Wehrmacht is not an invincible force. The victory near Moscow was of very important international importance, until the winter of 1941, Hitler's Germany did not experience such severe defeats in all theaters of military operations. The significance of victory in the battle of Moscow was great not only for the USSR, but also for the whole world. The victory also had a very large propaganda significance, and it is not by chance that the documentary “The rout of the German fascist troops near Moscow” won the Stalin Prize in 1942 and the Academy Award Oscar in 1943. 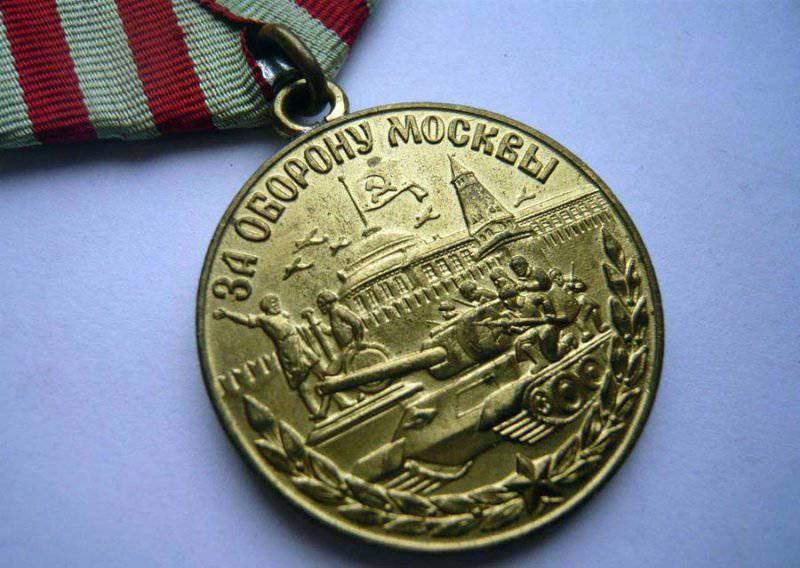 The Battle of Moscow in 1941-1942 was the first major victory won by Soviet troops over the Nazis. The Germans, intending to capture the city, concentrated huge forces on the Moscow direction - 74 divisions, including 14 tank and 8 motorized, which accounted for approximately 64% of all tank and mechanized formations and 38% of the infantry formations of the Wehrmacht, which at that time were operating on the Eastern Front. Despite the superiority in people and technology, the Germans did not manage to enter Moscow. Along with the soldiers and officers of the Red Army, the city was defended by its inhabitants, many of whom volunteered for the front or joined the ranks of the people's militia. In total, 12 divisions of the people's militia were formed from the inhabitants of the capital.

The heroism shown by the Soviet soldiers at the front was supported by the strong rear and the dedicated work of many thousands of Moscow citizens who worked at its enterprises. Only 450 thousand people took part in the construction of defensive fortifications under the city. At the cost of tremendous efforts, the Germans were stopped in the immediate vicinity of the city, and then, as a result of the Red Army’s counter-offensive, were driven away from Moscow by 100-250 km. For courage and valor shown in battles with Hitler's troops near the walls of Moscow, more than 3,5 million soldiers were awarded various orders and medals, 110 most distinguished became Heroes of the Soviet Union. 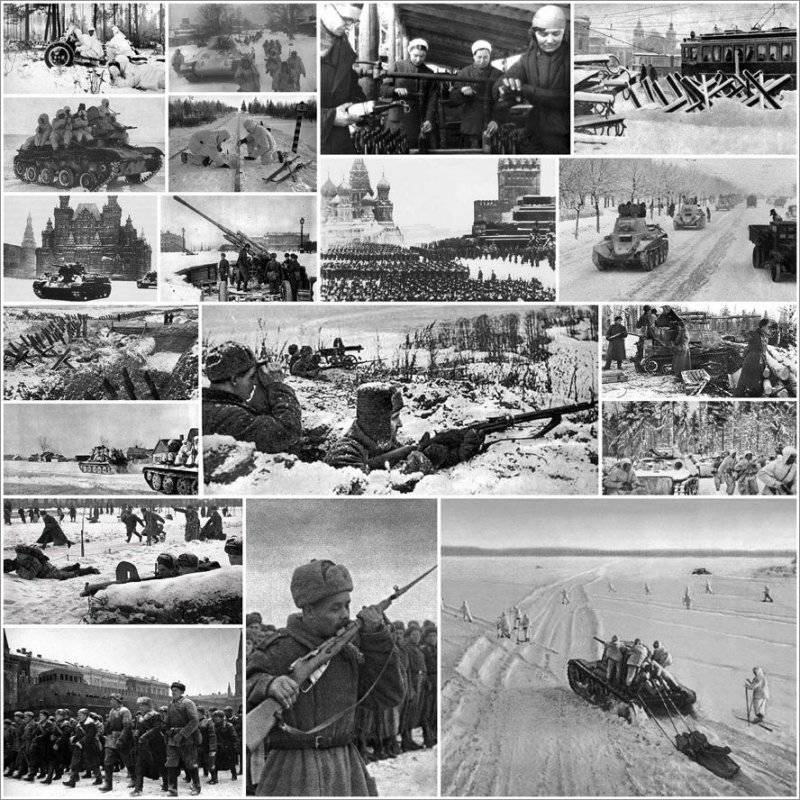 The battle of Moscow was of outstanding importance, as it became the first major battle of the Second World War, in which the German army was stopped and fled. The battle lasted from 30 September 1941 of the year to 20 of April 1942 of the year. During this period, the Germans lost more than 500 thousands of soldiers and officers, about 1300 tanks, 2500 guns, more than 15 thousands of vehicles and a host of other vehicles.

29 June 1943, Army General A.V. Khrulev, the Chief of Logistics who served as Chief, ordered Colonel-General P.I. Drachev, the Chief Quartermaster of the Red Army, to begin creating the new medal "For the Defense of Moscow". Several artists were attracted to work on the sketch of the future medal, among which was Nikolai Ivanovich Moskalev, the artist of the Central House of the Red Army. In the prewar years, he was already involved in the work on the development of insignia of the Red Army. According to his sketches, a special award badge was created for participants in battles with the Japanese army on Lake Hassan in 1938 and the “Excellent RKKA” badge. During World War II, he continued to work on the creation of new state awards.

Already by 12 July 1943, the artists presented a number of sketches of a new medal. 15 July A.V. Khrulev presented them to Stalin. Including two projects awards that were prepared by Moskalev. However, in connection with the emergence of more important at that time questions, the approval of a new medal was decided to be postponed. Work on the sketch of the medal was resumed only in January 1944. Two artists N. I. Moskalev and E. M. Romanov were given the task to present new sketches of the medal. At the end of January, 1944, after reviewing the submitted works on one of the sketches of Moskalev, the engraver, N. A. Sokolov, completed a test sample of an award in metal. This picture was taken as a basis for the award, but it still made small changes. Instead of the figures of the defenders of Moscow against the wall of the Kremlin on the medal appears an image of a tank with a group of soldiers on it. After making a number of small changes (placing the aircraft in the left part of the medal and reducing the dome of the government building), the sketch for the Defense of Moscow was finally approved. 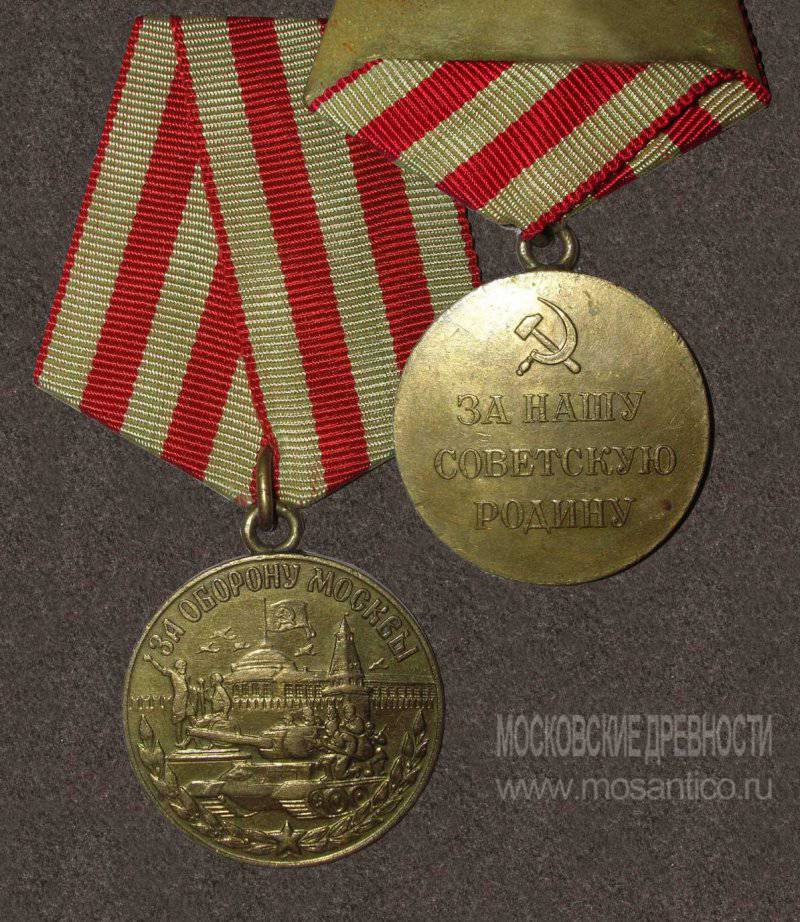 At the same time, work was carried out to create a ribbon of a future award. This task was entrusted to the Central Research Laboratory of the General Directorate of the textile and haberdashery industry. The award ribbon colors are alternating stripes of olive and red colors.

The medal "For the Defense of Moscow" could be awarded to all participants in the defense of the city: 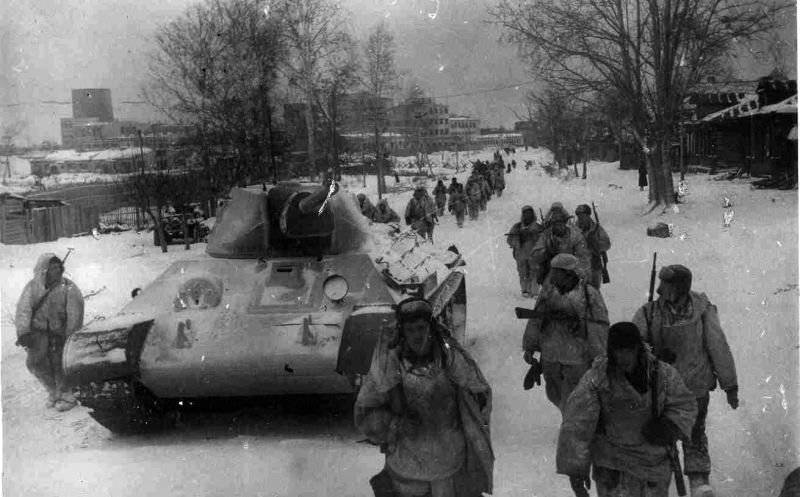 The medal "For the Defense of Moscow" was the only medal that was established during the years of the Great Patriotic War for the defense of the city, which did not receive the title "Hero City" in the 1940s. The corresponding decree on conferring this honorary title to the capital of the country was issued only in December 1966. The first presentation of the medal “For the Defense of Moscow” took place on July 20 of the year 1944. The medal with the certificate for the number XXUMX was received by JV Stalin. By 1, about 1962 thousands of people received a medal, among whom were 500 thousands of teenagers - participants of the defense of the capital. As of 20 year, more than 1995 million people were awarded with a medal. In case of death or death of the person awarded the medal, together with the certificate, was given to the family of the deceased for storage as a memory. For many people who survived this battle, this reward, made of brass, has become the most expensive in their lives.