Theodoro: the last fragment of Byzantium 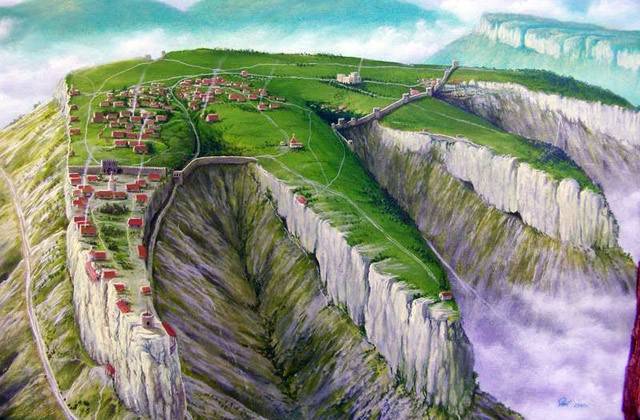 The impregnable city of Mangup is high in the mountains. Princes and princesses from the noble family of Palaeologus. The people who spoke almost German, who were able to fight off the Turks even 20 years after the fall of Constantinople. Double-headed eagle on the coat of arms. And yet - the thread that stretches today, in the Moscow district of Khovrino. This is not a fantasy, but regular episodes from stories Crimea, little known to the majority of Russians.

The Principality of Theodoro, it Gothia (Θεοδόρο, Γοτθία) existed on the Crimean land 270 years - from 1204 to 1475 year. For comparison: Catherine II annexed Crimea to Russia just 230 years ago - in 1783 year. Theodoro's country was small: it occupied only the southernmost part of the peninsula - the mountains and part of the coast to Alushta, which since ancient times was mastered by both the Greeks, and the Romans, and the Byzantines.

The population of the principality consisted mainly of the Crimean Goths, Greeks and Alans, professing Orthodoxy, and by the end of the existence of the principality was about 150 thousand people. However, in recent decades, the percentage of Crimean Tatars, Karaites and other Turks, who for various reasons wished to make friends with the Byzantine civilization, has significantly increased. The capital of the principality, the city of Mangup, built on a mountain not far from modern Sevastopol and Bakhchisarai, was often called Theodoro at that time. And the main port was Avlita - in fact, already within the boundaries of modern Sevastopol.

The fourteenth and fifteenth centuries in the Crimea were a turbulent time. Theodoro was attacked on one side by the Mongol-Tatars, on the other - by the Genoese, who gradually conquered the coast from the principality. The Italians climbed this “end of the world” at that time because even though it was far from the Apennines, it was not at all the edge: in the 13th and 15th centuries, the Great Silk Road moved to the shores of the Black Sea, which fabulously enriched enterprising merchants. Having pulled the incomes of the principality on themselves, the Genoese contributed to its gradual decline.

Part of the Crimean ready was forced to go into "Italian" citizenship, but the Genoese called their possessions in Crimea the capitancy of Gothia. From the north, Theodoro first attacked the Tatar teg Nogai in 1299 (managed to fight off), a hundred years later failed to capture it and the hordes of Khan Edigei, but here part of the land was lost. Having retreated to the mountains around Mangup, the Crimean Christians lasted another seventy years and were defeated by a new enemy, the Turks, only when the Greeks, Serbs and Bulgarians lost their independence for centuries. 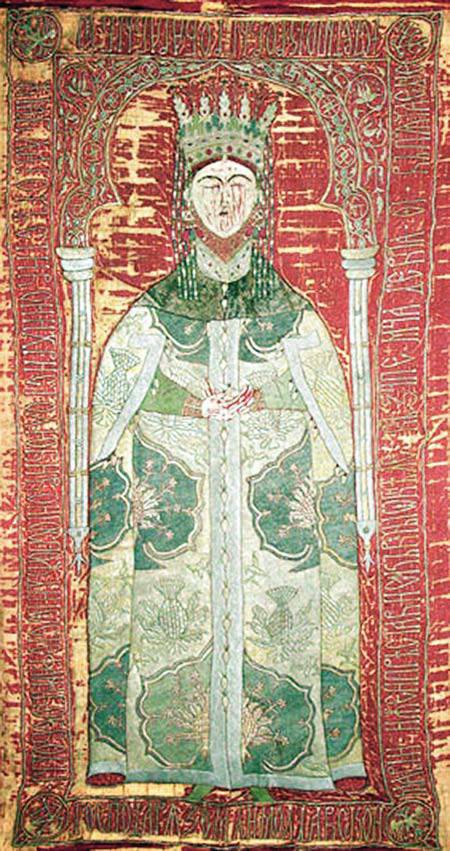 The origin of the princes (or, as they themselves called themselves authents) Theodoro has not yet been clarified: they could be representatives of the noble Armenian-Greek family of Gavrasov, but they could really come from the dynasty of the Comneni and Paleologos (as they themselves asserted). Therefore, the small principality occupied a prominent political and economic place in Eastern Europe, and the rulers of other countries wanted to intermarry with its rulers of “royal blood”. Maria Paleologina, Princess Mangupskaya, was the wife of the Moldavian ruler Stephen III the Great, her aunt Maria Gotha was married to the last lord of another Byzantine fragment, Trapezunda Empire, David the Great Comnenus.

They crushed the "last fragment of Byzantium," like Constantinople, also Turks. The siege of impregnable Mangup lasted five months. The courageous Theodorites managed to kill almost the entire selective corps of the Janissaries of the Ottoman Empire, but the Turks eventually took possession of the fortress with exhaustion and cunning. Almost the entire population of the city - 15 thousand people (at that time - the city is quite decent size) were either killed or stolen into slavery.

On the plateau around Mangup, during the excavations of the basilica, conducted by the archeologist N. I. Barmina, tombs literally slaughtered with skeletons were found - in one of them, before 17, many of them had signs of blows with a heavy blunt instrument. Many skeletons had upper or lower limbs chopped off. Burials were found in the most unexpected places. Vine-crushed (tarapanov) excavations were used as graves, and sometimes the bodies were only slightly covered with earth and stones.

When the Mangup Kadylyk was formed from the former lands of Theodoro, it remained Christian for a long time. The fact is that after the conquest, the Turks showed wisdom and did not finish off the remnants of defeated enemies, saving themselves from the exhausting "partisan". The lands of the Sultan's domain, on which the Christian population lived, were outside the jurisdiction of the Crimean khans. Muslims were even forbidden to settle in them for a long time. The language of the local Christians remained Gothic, that is, the German dialect, as mentioned by Austrian diplomat Ogier Ghislain de Busbek in a letter from 1562 of the year. The letter contains a list of local words and phrases from 96, as well as a song recorded by the ambassador in Gothic.

In subsequent centuries, ready, of course, gradually assimilated, and their traces in the Crimea today are visible only in the blondness and northern European features of the individual Crimean Tatars and Karaites. The historian Andrei Burovsky writes that the last villages of the Goths still existed in the Crimea even in the 18th century, but because of some kind of conflict, their inhabitants were killed by the Tatars literally on the eve of the annexation of the peninsula to Russia. Only one teenager, who sailed on a boat to the sea, managed to escape - he was picked up by Russian sailors.

The well-preserved ruins of the fortress of the capital of the principality of Theodoro can be seen today. The stronghold is built on top of Mount Baba-Dag, towering above the level of the surrounding valleys on 250 meters, and above sea level - on 583 meters. The place was chosen not only because of the cliffs, but also because there was water here - two springs were beating from the ground. 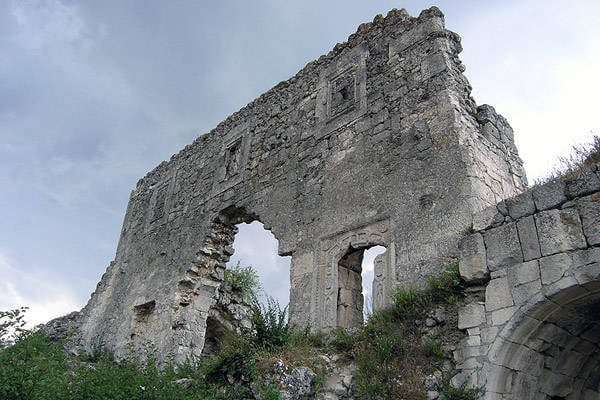 The ruins of the city of Mangup.

Baba-dag and without fortress walls is extremely inconvenient not only for storming, but also for simple lifting. The mountain is a separate-standing "table" plateau, steeply ending in the south. From the north side it is difficult to climb it, but it is possible: there steep precipices have four extended protrusions separated by gentle ravines. Their residents blocked the powerful walls with towers and passed only guests with peaceful intentions.

The first fortifications on the mountain were built in the 5th century, when the Goths only moved to the Crimea, and in the 6th century a monumental basilica was built on the plateau. So Mangup (as it was then called Doros) becomes the center of the Gothic diocese in the Crimea, and even for some time the Doros Metropolis, which united Christians in vast territories - from the Khazar Khaganate to the North Caucasus and Khorezm.

But the period of the heyday of Theodoro became the time of the highest flourishing of Mangup. It was from this era that numerous artificial caves, casemates, defensive walls, basil foundations and citadel ruins at Cape Teshkli-breaker have been preserved. The citadel itself and the remains of the defensive walls are best preserved.

In the largest cave, called the Drum-Koba, there is a column. If you hit it, you will hear a sound like a drum beat. It is believed that there was a prison in which notable prisoners, including Russians, languished under the Turks. So, in Mangup in the year 1569 they kept in custody the Russian ambassador Athanasius Nagy with his comrades, and in the years 1572 – 1577 - Vasily Gryazny.

Unfortunately, only the foundations remained of the most magnificent buildings of Mangup - the palace of princes and the magnificent temple of Saints Constantine and Helena - but cave churches and monasteries are preserved along the cliffs, in some places it is possible to see traces of fresco painting.

Now it is this route - almost to Khimki-Khovrino (or rather, to Sheremetyevo) airplanes fly from the Crimea to Moscow - only two hours of flight. In the Middle Ages, the path took many days, sometimes - a whole month, on horseback, on bad roads, through slingshots and abreast of defensive lines. But the residents of Theodoro overcame him, building their ties with the Muscovite state. 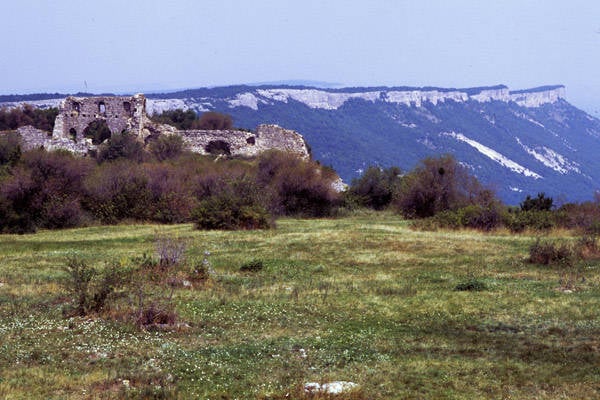 The Grand Duke of Moscow, Ivan III, sent ambassadors to the Crimea to intermarry with the princes of Theodoro. But judging by the current Moscow toponymy, the most notable was the noble family of the Khovrins, who later became Moscow boyars and split in the 16th century into two kinds - the Golovins and the Tretyakovs.

At the end of the XIV century, the ancestor of the Khovrins moved from the Crimean city Sudak to Moscow. According to some data, his name was Kuzma Koveya and he was just a rich merchant, according to others - it was an aristocrat Stefan Vasilyevich. Detractors said that the surname Khovrin comes from the old Russian word "Khovra", that is, an untidy, treacherous person. But they are objected that Stefan Vasilyevich was not just a noble, but even a royal family, and therefore Khovrin was distorted from the Byzantine imperial dynasty of Kommen. Like, the name Komnen turned out to be inconsistent for the Russian language, and it was immediately reassigned to Comrin, and later - Khovrin.

In the “Russian genealogical book” published in the XIX century by Prince Peter Dolgorukov, Prince of Gothia Stepan (Stefan) Howra was really mentioned, who was received with honor by Prince Dmitry Donskoy or his son Prince Vasily, received a courtyard in the Kremlin, marked on the ancient maps of the city. In old age, Stephen took monasticism under the name of Simon, and his son Gregory Khovra played an important role in the founding of the Simonov monastery. But those who do not believe the genealogical books, object that the records of the princely origin of the boyars of Khovrina were forged, and initially only the merchant Kuzma was mentioned in the Russian chronicles.

But in any case, the Byzantine-educated Kovrins, who had become podnatorevshie in competition with the Genoese on the Great Silk Road, looked advantageous in the then wildish Muscovy. They became a kind of finance ministers - hereditary treasurers of the Moscow principality.

In 1585, Khovrin was granted land on the Likhoborka River north of Moscow, and a village was founded there, named after the boyar. Today it is already the outskirts of an overgrown metropolis, where more than 80 thousands of people live. Interestingly, how many of them know about the connection of the name of their area with the Byzantine, not the merchants, not the aristocrats from the Crimea?

Ctrl Enter
Noticed oshЫbku Highlight text and press. Ctrl + Enter
We are
Double-headed eagle - heritage of ancestorsTheodoro: glorious history and the tragic fate of the Orthodox principality in the medieval Crimea
Military Reviewin Yandex News
Military Reviewin Google News
31 comment
Information
Dear reader, to leave comments on the publication, you must sign in.