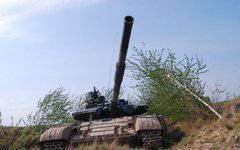 The reason for it is that the Southeast does not recognize the outcome of the presidential election.


Less than a month is left before the Ukrainian elections. And then there was a misfortune: according to the Constitution, elections should be held on the last Sunday of March of the fifth year of office. And they are held on 25 May. And what is the term of office of the future president? Until March 29 2015? There are two ways out of a difficult situation: either to hold regular elections in March 2015, or to amend the Constitution.

Most likely, neither one nor the other will be done, which calls into question the legitimacy of the new president. And the fact that some regions (for example, the South-East), very likely, will ignore the elections, will only strengthen it. And the president will turn out to be, in American terminology, a “lame duck,” only in a different sense: he will not have the mandate for reform from all of society.

A week ago, a group of deputies of the Verkhovna Rada appealed to the Constitutional Court of Ukraine with a request about the term of office of the new president. There is no information about the date of consideration of the issue. However, partly legitimate authorities believe that a court decision will not affect the conduct of elections. The junta and the United States patron for her, these elections are urgently needed, and Kiev aspires to them, no matter what.

“That is, these elections are a vital necessity, the independence and territorial integrity of Ukraine may depend on them. Following this need, regardless of the fact that the transitional provisions indicate the time of the next elections in March, the new president, elected in May, should be authorized for five years. And within the framework of the constitutional reform, the old rule must be revised and the new date of the election of the head of state should be indicated, ”said Igor Koliushko, president of the Center for Political and Legal Reforms.

In Kiev, they note that many politicians and the oligarchs behind them would not so much derail as delay the elections. Attempts to carry out such a decision were made in March, but it is believed that they met with the resistance of society. Perhaps this is so. No one wants to endure impostors for too long, because things are getting worse and worse.

But if the elections are held, will Russia recognize them? A month ago, its officials categorically replied: “No!” Now the rhetoric softened, but not significantly. In mid-April, President Vladimir Putin reiterated that Russia could not recognize the results of the Ukrainian elections, since preparations for them are carried out in an unacceptable form - candidates from the eastern regions cannot express their point of view and are attacked. “If everything goes on in this way, then of course we will not be able to recognize everything that will happen after 25 in May, as legitimate,” he concluded.

In a sense, the fate of the elections will be decided in the South-East. If the rebellious region does not recognize them, then the new president will differ little from today's and. about. President Alexander Turchinov. Against this background, the election campaign of different candidates and the financing by each oligarch at the same time of several candidates for the highest position (for insurance) appear to be a secondary matter. First you need to agree with the South-East, but its conditions for Kiev are like a sharp knife in the heart. He has one answer: no federalization, no state Russian! Well, if so, then the output is not visible. Southeast is preparing its referendum before the elections, on May 11, which can bring Kiev many exciting moments.

Under the current conditions in Ukraine, it is impossible to hold either legitimate elections or a referendum on federalization. Such an opinion was expressed at a meeting of the working group under the chairman of the State Duma on legal analysis of legislative procedures and legal acts adopted in Ukraine on Tuesday, April 29, head of the State Duma Committee on Constitutional Legislation and State Construction Vladimir Pligin.

In Ukraine, "one of the basic constitutional principles, the principle of the rule of law, has been violated," the parliamentarian stated. In addition, "the local government system is actually destroyed," he added.

The recognition by the Russian authorities of the presidential election in Ukraine depends on how things go, said Russian Deputy Foreign Minister Sergei Ryabkov in an online interview. “It depends on what they will precede and how they will pass,” he said, answering the question whether Russia recognizes the election of the president of Ukraine.

And according to the deputy director of research programs of the Council on Foreign and Defense Policy, Dmitry Suslov, large-scale armed clashes between opponents and supporters of Maidan may begin as early as May 26-27.

"The civil war in Ukraine can begin on 26-27 in May of this year, because supporters of federalization, naturally, will not go anywhere, and, obviously, they will not be satisfied with some superficial amendments to the Ukrainian Constitution, which will not change the essence, will not change the basis of domestic relations within Ukraine, ”he suggested.