American tax on the world economy. To the anniversary of the Bretton Woods system 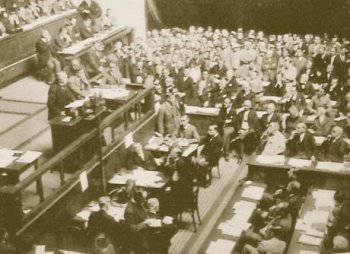 Two months later, the anniversary of the Bretton Woods Conference, which laid the foundation of the modern monetary and financial system. It's time to talk about what she contributed to the world economic system. Moreover, in recent times, many have said that it has long since ended its existence (namely, since the second US default of 15 in August of the 20th century, 1971, when the currency of this country to gold was canceled).


Traditionally it is recalled that this conference established the domination of the US dollar in the world (in fact, Western, world, it became only after 1991 of the year) the financial system. In fact, domination (carried out through binding to gold) was offered to two currencies, the dollar and the British pound sterling, but the United Kingdom quickly refused this honor, because it turned out to be too expensive. The dollar peg to gold was indeed canceled 27 years after the conference, but by then the dollar was dominated by other mechanisms.

Further, what is known is less, in B.-V. The conferences created institutions that still determine the parameters of the global financial system. These are the International Monetary Fund (IMF), the World Bank and the General Agreement on Tariffs and Trade (GATT), which today is called the World Trade Organization (WTO). All of them safely exist and, in a sense, poison the lives of many countries of the world.

At the same time, if you start to carefully look at the formal documents defining the activities of all these organizations, then you can get very confused. For this reason, in this text I will try to give a brief description of the real meaning of the existence of all these institutions. It consists in a very simple concept: the cost of a loan for a particular company is determined by its proximity to the emission center of the dollar. That is, the US Federal Reserve.

Why is this rule universal? And because the WTO ensures that the markets are global and nobody, using their sovereignty, could defend their markets from external influence. And so that it is impossible to use the emission and state monetary policy tools to reduce the cost of credit for national enterprises, the IMF and World Bank tools are used (for example, the Carrency Board policy, that is, the binding of national currencies to the available foreign exchange reserves, in different forms ). At the same time, since the USA still controls the world's largest sales markets and almost all goods in the world are worth something only because they can be exchanged for dollars, failure to cooperate with these organizations is possible, but it is very expensive for the public. countries that have decided on such an act. Roughly speaking, they must live very poorly.

In this case, the principle of "claw stuck - to the whole bird of the abyss." As soon as some company tries to enter the rich markets of the United States (or related countries), it turns out that it should receive ratings from international agencies (otherwise you can get under dumping sanctions, not get a cheap loan, and so on). Actually, the cost of the loan is determined just by the rating - which is set by rating agencies affiliated with the Fed and the US monetary authorities. But they do it for a reason, but on the basis of information that still needs to be obtained. Naturally, no one will believe the words of the company itself, which means that if someone wants to get a rating, he must hire an auditing company, and not anyhow, but affiliated with the same structures. As the rest, of course, "no faith."

The audit company comes - and gives indicators on which agencies put a low rating. And in order to increase it, it is necessary to carry out a set of measures, which should be determined not by anyone else, but by a consulting company affiliated with previous structures (they used to be a single whole with audit companies). Well, then those who implement these events, their rating, of course, improve, but they are built into the existing financial system, and on the second and third roles.

Why on the second and third? And because the highest ratings they still do not give, because they - "strangers." And what is a lower rating? This is a more expensive loan that is paid in favor of US banks. If we are talking about a particular country, then all of its companies pay such an additional tax in favor of the United States. Maybe for some companies it is a bit more, for others it is less, but it always exists. And the “closer” the state is to the United States, the more it supports the policy of the United States, the less this tax on the economy.

It is in this tax on all countries and peoples included in the financial system (today - almost the world), and there is a sense of the Bretton Woods agreement! In fact, everyone pays a kind of “tithe” in favor of the United States - for the fact that once it was their economy that became the winner in World War II. The USSR and the countries of the Socialist Commonwealth for some time were spared from this tax, but their destruction in 1988 – 1991 years forced them to pay this tax.

In a sense, the word “tax” is not even very good here, because it implies some order and regulation that is not so easy to change. Rather, the word “tribute” comes up here, and in this sense, Russia returned to the situation of the Mongol-Tatar yoke after 1991, when the Baskaks sent first, and then their own princes, which today are Russian banks, collected the tribute. And getting rid of this tribute (which puts all Russian companies without exception in a more unsuccessful competitive position in relation to companies that pay less tribute, primarily to American ones) can only be done by drastically reducing interaction with the dollar world.

By the way, the size of this tribute can be determined. Today, our foreign currency debt is about 700 billion dollars. And if we assume that the average rate on this debt is about 5% (actually more), then we pay about 35 billions a year. Just. Of course, others also pay, but much less. Actually, small and medium businesses also will not receive credit under 5% from us - which means that it cannot compete with other things being equal. And it must be clearly understood.

Of course, fully implement this scenario of dedollarization today is difficult. Although tomorrow is already, most likely, possible. And not only because the dollar dominates the world so far, and we produce almost nothing, but also because we do not have a working ruble lending system. It is for this reason that the creation of such a system is the most important task that needs to be solved today. Another thing is that, solving it, we automatically take away huge profits from the Fed and its affiliated structures, and no one wants to accept it so easily. All the more so, just start here - and the entire Bretton Woods financial system will begin to crumble.

And a few words "on the topic of the day." A downgrade of Russia and a number of its companies is an increase in tribute (through an increase in the cost of a loan). And, accordingly, those who today “run into” opponents of dollarization, in fact, not only defend the US right to impose “tribute” on Russia, but also defend their right to shape our country's policy through the size of this tribute. Even the Mongolian Baskaks did not reach this ...

In other words, as in the Middle Ages, in the period of the formation of the Russian state, we must go through the Kulikovo battle, and through “standing on the Ugra”, in order to achieve the right not to pay tribute to external forces. And this is a difficult matter, it requires a lot of internal work and the presence of appropriate people (Dmitry Donskoy with his governors, Sergius of Radonezh, Ivan III, and so on). And I very much hope that in the year of the 70 anniversary of the Bretton Woods Agreement such people will appear and begin their creative work.

Ctrl Enter
Noticed oshЫbku Highlight text and press. Ctrl + Enter
We are
What you didn't want to know about EnglandBretton Woods system came up with a Soviet spy
Military Reviewin Yandex News
Military Reviewin Google News
13 comments
Information
Dear reader, to leave comments on the publication, you must sign in.