1 May 2014
11
The leadership structure of the country's aerospace defense creates uncertainty in responsibility for its condition and further development.


Now, in the distant 80 – 90s of the last century, a group of specialists from the main command of the Air Defense Forces and the 2 Central Research Institute of the USSR Ministry of Defense substantiated the need to transform this type of Armed Forces into the Aerospace Defense Forces. The main dominant of this idea was the unification under the centralized control of all forces and means capable of countering the means of WCS and fighting them in a single aerospace space. At the same time, the main prerequisite for its implementation was the unification of the Air Defense Forces and the then-existing Directorate of the Space Forces Chief of the USSR Ministry of Defense, later renamed the Military Space Forces (VKS), into one type of Armed Forces.

All the reasons for this were. At that time, deployed rocket-space and air defense systems already existed in the Air Defense Forces, intensive work was under way to increase their effectiveness. In technical terms, the pairing of previously independently existing missile defense systems A-135 of Moscow and the air defense system C-50 of the Moscow region was carried out. During the tests, they showed high efficiency of joint use and confirmed the possibility and expediency of integrating forces and means capable of fighting in a single aerospace. In the Air Defense Forces, there was the only IS-MU orbital system in the country and in the world, the IS-MU spacecraft interception complex based on the long-range fighter MiG-31D was at the final stage of its creation. 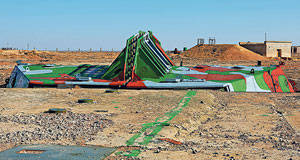 However, this seemingly simple and rational idea did not come true. Despite the existence of practically combat-ready and jointly operating systems and complexes of rocket-space and air defense under centralized control from the central air defense command and control center, the then leadership of the Office of the Chief of Space Aids and then the Military Space Forces did everything to prevent the integration of Air Defense Forces and Aerospace Forces. To this end, attempts have been made to create a parallel system for monitoring space, space-based and anti-satellite weapons. For the sake of their interests, the starting position of the IS-MU PKO complex, which was under their jurisdiction, which they were not going to do, was supposedly withdrawn for modernization. Subsequently, this was the main reason for the cessation of work on the improvement of a sufficiently promising and effective means of anti-space defense.

Unfortunately, since 1996, many promising developments in this area have not received further development, and the movement itself to build an integrated EKR system has acquired a negative vector. This was the result of a subjective and ill-considered decision on the organizational separation of the RCF troops from the Air Defense Forces and the subsequent change in the organization of control of the main components of the aerospace defense in the performance of general or related tasks. Being in different structures, they began to exist autonomously and if they received some development, then without mutual connection, but only based on the vision of their prospects for their leadership.

In 1996 – 1998, a group of enthusiasts for creating an EKR system of the main command of the Air Defense Forces, 2 and 45 Central Research Institute with the participation of general designers of the main systems and means of missile defense and air defense achieved a positive decision on the need to create an EKO. However, it was not implemented, as Army General-in-Chief Igor Sergeev, the Commander-in-Chief of the Strategic Missile Forces, appointed by the Minister of Defense, decided to strengthen his former Armed Forces by including troops of the Military Space Command and Military Forces of the Russian Defense Ministry. In support of the expediency of such a step, it was argued that this would significantly increase the strategic deterrence potential of the RF Armed Forces and would not in any way affect the ability to repel offensive operations and actions of the enemy's SVKN. A number of articles frequently published by experts, such as Colonel-General Viktor Esin, Major-General Vladimir Dvorkin and others, still negate the objective process of transforming air and space into a single aerospace sphere of armed confrontation and, as a consequence, the rationality of such structural transformations of the Armed Forces RF.

Having stayed in the Strategic Missile Forces for three years, the RKO troops turned from the previously elite line of Air Defense Forces into the RKO organization and, together with the former VKS RF MOD in 2001, became one of the components of the Russian Space Forces. However, their misadventures did not end there. It is not clear for what purpose, having previously a harmonious and complete structure, both organizationally and technically functional, in the form of an RKO association, now the command of the Space Forces is dismembering it into component parts. They are transformed into some kind of strange technical formations for the Armed Forces of the Russian Federation, such as the main centers of PN, KKP, and also a missile defense compound. In such a disconnected state, the units and units of the missile defense organization got into the EKO Army created in 2011.

It is not clear for what reason the previously existing system of control of outer space of the RF Armed Forces, in its capabilities slightly inferior to the characteristics of the same US system, suddenly became known as a system of reconnaissance of the space situation. Obviously, the authors of its renaming did not understand that the exploration of outer space is one of the particular tasks of its control, including, in addition, the analysis, assessment and prediction of the space situation.

From the information about the current structure of the Armed Forces of the East Kazakhstan region and the four integrated military districts with the subordination of the Air Force and Air Defense to all specialists involved in the organization of the fight against SVKN, it becomes clear that this organization of the aerospace defense of the Russian Federation is defective. The former initiators of the creation of the system of aerospace defense could not even think that their proposals and the concept of the aerospace system of the Russian Federation approved by the president of Russia would be implemented in such a distorted form.

The main problem lies in the decentralization of responsibility and control of components of the aerospace defense and the absence of any logic in creating these formations and organizing their combat control. The main disadvantages are:

1. Organizational disengagement of air defense forces (ASD) and military districts, which are at the same time under the administrative subordination of the Air Force Chief Command and the remnants of the former EKO Operational-Strategic Command — the three ASD brigades that became part of the command of the EKO forces. Thus, various agencies are responsible for the aerospace defense of the Moscow region and the rest of the Russian Federation, and it is unclear who, how and to what extent will plan operations or combat actions to repel and attack SVKN strikes.

2. The absence in the command of air defense and missile defense of the aerospace defense of the Moscow region fighter aviation, without which it is impossible to organize an effective fight against aerodynamic targets in the area of ​​responsibility of this command, given the limited capabilities of aerospace defense teams to repel air strikes at far approaches.

3. Administrative disaggregation of cash register systems. The main centers of the PNN and KKP are subordinate to the space command, and the PRO connection - to the command of the air defense and antimissile defense forces of the aerospace defense. At the same time, by the end of the 80-s, at the end of the XNUMX-s, the PRN, PFC, strategic missile defense systems, and the missile defense system represented a single large-scale integrated structure that operated in automatic mode. And naturally, its combat use should be carried out under a single leadership within a single structure.

4. And most importantly, the existing structure of the leadership of the aerospace defense of the state creates uncertainty in responsibility for its condition and further development.

From this it follows that such a control body of the aerospace defense organization is needed, which will be responsible for the implementation of the whole complex of tasks related to the organization and management of the country's aerospace defense and its conduct with centralized operational (combat) control of all troops and forces. In turn, the earlier question, on the basis of which structure it should function, is still not resolved.

The special conditions for organizing and conducting combat in aerospace, in particular, the global spatial scope and high dynamics of the actions of SVKN, as well as the decisive importance of the time factor clearly require the concentration in a single management body of all the functions and tasks of managing aerospace defense in peacetime, so in wartime.

In this regard, the Armed Forces armies must be given full responsibility for the organization of aerospace operations and other forms of action, the troops and forces participating in them, as well as the training of armored forces groups and operational control bodies of the Armed Forces and regional commands to perform airborne tasks. space defense.