The statement by the US State Space Agency about the winding up of bilateral space cooperation once again aroused interest in the national space program. The NASA initiative is another reason to recall the shameful, but not yet broken, chain of emergency years in the industry and think about our attitude to space activities in general. So far, success in mastering the big heights of optimism does not cause.

Manned flights traditionally are a priority space direction of the former USSR and modern Russia. The ISS is a domestic space "all", which takes the lion's share of the corresponding line of the national budget.

ISS is our everything

Roscosmos has always advocated the extension of the service life of this unique international long-term orbital complex, recalling the diversified scientific program and taking pride in the growing Russian-American science and technology ties. 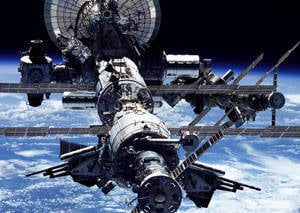 The apotheosis of the rainbow picture of this interaction can be considered after Albert Gore's new year proposal to award the station the Nobel Peace Prize for the current year. His own Nobel laureate in the field of world peace for 2007 year and the memory of his joint statement with Russian Prime Minister Viktor Chernomyrdin in September 1993, which gave the start of the ISS program, seemed to Gore as a worthy basis for such an initiative.

Meanwhile, even a brief acquaintance with the documents governing the procedure and procedure for awarding the Nobel Prize suggests that this idea is contrary to common sense.

The Nobel Peace Prize is an award annually awarded by the Nobel Committee in Oslo to individuals and organizations that, in the opinion of the committee, made outstanding contributions in the field of peace consolidation.

The station is strictly divided into national segments. Russia manages the ISS from the Space Flight Control Center in the Korolev near Moscow. America is from the Lyndon Johnson Mission Control Center in Houston. The European Laboratory Module Columbus is managed by the European Space Agency Management Center, housed in the German Oberpfaffenhofen. Japan runs its Kibo research module from the city of Tsukuba, where their Aerospace Exploration Agency is located.

To estimate the share of contribution to the common cause of each is unrealistic. Even a short list to jot down is not possible. If we talk about the developers of the station modules, then we have five of them, the Americans have seven. One by one - the Europeans with the Japanese. By the way, unlike the Americans, we still have not completed our segment. The multipurpose laboratory module "Science" has already passed without one year 20 years from the date of the start of development and full 10 years from the date of the decision to include in the domestic segment of the ISS. According to information received from the head of Roscosmos Oleg Ostapenko, "Science" will remain on the ground for at least another year.

No special role of the ISS in strengthening peace has played and does not play. It is clear that the absurd proposal of Gore did not translate into a formal application to the Nobel Committee.

Swearing between the crews really has not yet been observed, as, incidentally, the special warmth in the relationship.

Academician Lev Matveyevich Zeleniy never really complained about manned cosmonautics, preferred automatic research equipment. Less than a week before this meeting of the presidium, he publicly said that it is the person, and not the devices created by him, that are inherent in discovering everything himself, and cited extreme tourism as an example. Flying into space, according to Green, is another area for people to test its capabilities, otherwise life on Earth will become boring.

From the point of view of science, Academician Green assesses the results of manned cosmonautics as modest, although he admits that the ISS has given a great deal to practical, terrestrial medicine. Of course, there is a certain problem with the introduction of various tools, simulators, simulators developed on the ISS, but, as noted by Green, implementation is our common problem not only in this area. Many scientific innovations remain "in the portfolio."

The above is not enough to qualify for a serious reward.

Now let us turn to the ISS practice evaluations.

In May 2008, the deputy head of the RSC Energia flight and space center, Pavel Vinogradov, said: “The ISS, in terms of the scientific problems solved on it, unfortunately does not justify itself. We are constantly late with the scientific program. Today, a crew of three people can do some kind of science, can fully work at the station, but when a crew of six people appears at the station, the task will be how to load them. Scientific research is built in such a way that we must always be ahead of the possibilities of delivering scientific experiments aboard, and we are constantly lagging behind ... Today, we mostly fly in order to fly or provide our American and other partners. ”

In January, Academician Nikolai Anfimov, one of the leading domestic developers of space transportation systems, who headed 2009 through 2000, was the leading enterprise of the national space industry, the Central Research Institute of Mechanical Engineering, at the 2008 percent in January.

June 2011 of the year. Gennady Raikunov, academician of the Russian Academy of Cosmonautics, developer of civil and military space systems, general director of TsNIIMASH from 2008 to 2013, says that the capabilities of the ISS are at the limit. “We need to think about something more significant and significant,” says Raikunov. “For the time being, we are theoretically considering the use of a natural satellite, the Moon, as a satellite, on which much more experiments can be carried out.”

March this year. Oleg Ostapenko, the current head of Roscosmos, who is directly responsible for the activities of the ISS, argues that the results of experiments conducted by Russian scientists at the orbital station, in particular the Plasma Crystal, are worthy of the Nobel Prize. At the same time, the head of Roscosmos stipulates that the ISS were often carried out work that is ineffective for science, in connection with which the Russian scientific program is now seriously revised.

Translated into normal Russian, this means that the strength of the scientific weight of the station practically does not put pressure on the support of fundamental scientific knowledge. In other words - tends to zero.

The main reason for which Roskosmos and the Russian Academy of Sciences warmly responded to the obviously dubious proposal of Gore is that our cosmonautics in the person of its piloted part strongly inherited Soviet traditions, when they did not spare any promotional money for this promotional toy. To the detriment of all other directions.

The situation has not changed for decades. Yuri Koptev, who headed the Russian space agency from 1999 to 2004 for a year, somehow mentioned that space science remained on Earth again for the sake of the ISS. Ten years after this statement, little has changed. And in 2014, Lev Zeleny, the head of the RAS Council on Space, can only tell about plans, but not about results, because there are none.

Americans from the beginning of last year launched the 23 satellite exclusively for scientific purposes. We are only Chibis-M and Spectr-R. The first one, the microsatellite launched in January of 2012, is intended primarily for research of gamma-radiation. The second is a truly powerful space observatory, launched into space in July 2012.

Already by the beginning of 2012, Roscosmos had two accidents that had undermined not only Russian prestige, but also the ISS program and deep-space research. In August, 2011 is the emergency launch of pride means of launching a Soyuz launch vehicle with a Progress transport vehicle with cargoes for the ISS. In January, 2012-i burned in the atmosphere after the unsuccessful separation from the carrier station "Phobos-Grunt".

Dmitry Rogozin at the end of 2012’s spring gave Roscosmos a formidable ultimatum: either during June 2012, they clearly formulate a constructive program of their activities, or they will have to decide the fate of the agencies and the programs and, accordingly, the people who will lead them. Rogozin stressed: "We want Roscosmos to determine exactly how it can be useful to the country."

Roscosmos responded with a proposal to create a special presidential council on space and significantly increase the staff of the agency itself.

As for the space tasks directly, in April 2012 of the year Roscosmos formed the program “Strategy for the development of space activities up to 2030 of the year”. It provides for the creation of a new variety of technology - both manned and automatic. As well as the development of various technologies, the expansion of the "space services" complex and, of course, astronaut flights to the moon, the deployment of stations on Mars, the study of Venus and Jupiter. By 2030, Russian spacecraft are obliged to meet the needs of the socio-economic sphere, science and defense, up to 95 percent instead of 40 in 2011.

The problematic aspects, which in the hardware could turn out to be unsuccessful and emergency, simply disappeared. Obviously fearing a repetition of the resonance crash of the Phobos-Grunt apparatus, space managers decided to close 15 programs for exploring the planets of the solar system. That is, in response to the ultimatum, the development of new office space and plans were proposed, the responsibility for the execution of which will fall on the grandchildren.

“The United Rocket and Space Corporation is registered. We are embarking on a large-scale reform of the national cosmonautics, ”Deputy Prime Minister Dmitry Rogozin, who oversees the Russian military-industrial complex and space, said in his twitter in early March this year.

According to the text of the presidential decree, the corporation will be engaged in ensuring the development, production, testing, supply, modernization, implementation, maintenance, warranty and after-sales service, repair of military rocket and space technology, dual, scientific and socio-economic purposes in the interests of government and other customers, including foreign ones. In addition, ORKK is obliged to pursue a unified technical policy in the creation of modern space equipment. Roskosmos, formerly the sole head of the industry, will determine the state policy in the rocket and space industry and act as a customer.

Of course, it is important and necessary to separate the functions of the customer and the contractor. But it is not necessary to begin with this. Recently, the director of the corporation, Igor Komarov, who had served as deputy head of Roskosmos for several months before that post, and until then had been in command of AvtoVAZ for many years, said that the formation of United Rocket and Space Corporation will be completed in the middle of 2015. Based on the historical experience and the very amount of work on the incorporation of all enterprises with the subsequent procedure of transferring them to ORKK within such a short timeframe, it is unlikely that they will succeed.

The only reform that still awaits us is a grand bureaucratic move. It would be much more productive to start simply re-equipping enterprises within the framework of the already existing subordination. Today, according to various estimates, more than 70 percent of technologies that meet the needs of production, are physically and morally obsolete. Half of the machine park is 100% worn out, and the average age of workers in the defense-space sphere is approaching 60 years.

We are pushing the ISS for a premium, we are going to build hotels in orbit and roll tourists around the moon, but at the same time we have no assurance that with ORKK the number of our scientific devices will become double-digit. It remains to hope that someone from the new cabinets will see that the source of our space failures is immaterial, that they are not machines, avionics and rocket stages with a bad welder. The point is in our attitude to what we produce. We just need to break persistent traditions based on inert thinking and focused on momentary ringing success with the indispensable assurance of our leadership.