12 May 2014
26
A few years before the country gained independence, the future leaders of the Republic of Lithuania became concerned about the defense of their state. They understood that in the very near future the army of the new state would need weapon. In addition, their plans included the creation of armed groups that would fight the Soviet "occupation". As a result, in the late eighties, Lithuanian engineers in artisanal conditions began developing new small arms. 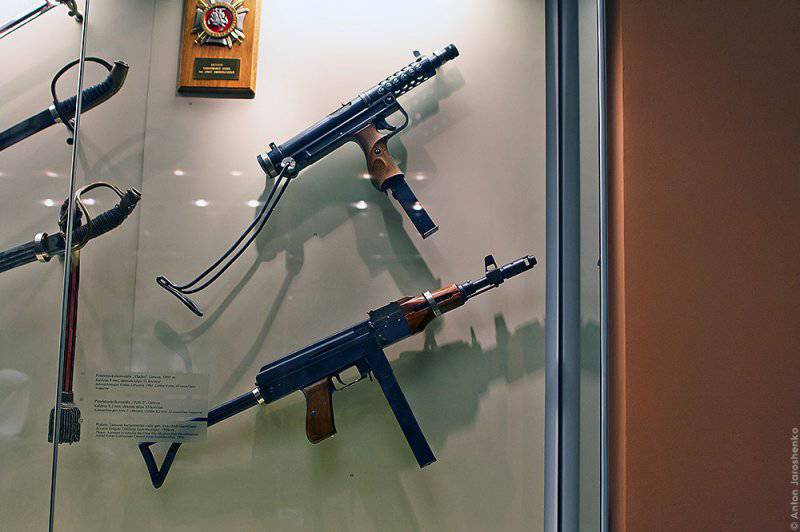 Work on the creation of new designs headed Algirdas Petresevichus. Prior to that, he worked as an engineer in several organizations and had a certain design experience. In addition, it is impossible not to mention his motivation to work on weapons. Back in the early fifties, Petresevichus began his struggle with the "occupiers." At that time, he joined the underground organization "Iron Wolf" and quickly reached the post of deputy head. In 1956, after a regular rally, the future gunsmith was arrested and convicted of anti-Soviet activities. Later he made two unsuccessful attempts to escape from prison, during one of which he was wounded and lost his arm. In the late sixties, Petresevichus returned home to Lithuania and, apparently, held a grudge against the authorities.

In accordance with the plans of the Lithuanian underground workers of the late eighties, a new weapon for the armed forces should have a simple structure. The fighters against the “occupation” did not have access to serious production facilities and therefore needed weapons that could be produced with the existing equipment. Approximately in the same way the cartridge for the new weapon was chosen. The underground had no access to intermediate cartridges for automata. The only suitable option was the 9x18 mm PM cartridge: such ammunition could be obtained from militiamen loyal to the underground.

A new submachine gun for the underground was developed by A. Petresevichus in just a month. The design of this weapon is widely used ideas borrowed from other projects. The main "donors" of ideas were the Kalashnikov machine gun and the German submachine gun of the Second World War, the MP-38 / 40. Such borrowings affected both the design of the internal mechanisms of the weapon and its appearance. The project of the first Lithuanian submachine gun was called Vytis.

Receiver "Vitis" was made on the basis of the design of the Kalashnikov assault rifle. The handguard, front sight and muzzle brake compensator were made in a similar way. The latter was borrowed from the AK-74, with minimal changes due to a different bullet caliber. In addition, the Soviet machine gun "shared" with the Lithuanian submachine gun automatic gas and sights.

Inside the receiver was located bolt carrier with a gas piston and a rotating bolt. Information on the design of the trigger mechanism is not available. On the left side of the receiver, above the pistol grip, there was a flag of the fuse-translator of fire.

Despite the use of gas automatics, the Vytas submachine gun was designed to fit the 9x18 mm PM pistol cartridge. Because of this, he received a characteristic box magazine on 36 cartridges and the receiving shaft of the shop with a latch. As follows from the available information, it was the ammunition supply system that was borrowed from German weapons such as the MP-38 / 40. According to some sources, the Vytis submachine gun was equipped with a magazine on the 32 or 34 cartridge. Perhaps the capacity of handicraft shops was different for each lot. 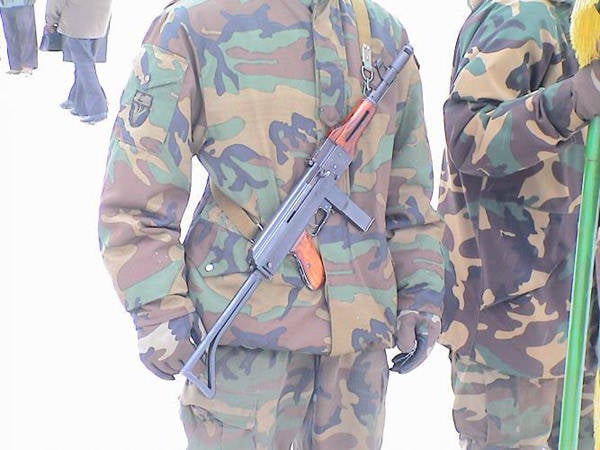 For ease of use the submachine gun "Vitis" received wooden lining the pistol grip and handguard. On the rear surface of the receiver was installed butt, folding to the right. The total length of the weapon with the butt folded out reached 736 mm, with the folded 508 mm. The submachine gun was equipped with a barrel length 200 mm (22,2 caliber).

When developing a new weapon, A. Petresevichus had to take into account the peculiarities of its production. The Lithuanian underground did not have any serious equipment, which is why most of the details of the submachine gun were proposed to be made from sheet metal under artisanal conditions. This had a corresponding effect on the characteristics of the weapon, but at the same time it made it possible to quickly begin production under the existing conditions.

The exact number of Vytis submachine guns released is unknown. Probably the score went to tens or hundreds. It is known that shortly after Lithuania proclaimed its independence, the first version of the weapon of Petresevichus's construction received a new designation: Vytis-1. The reason for this was the appearance of an updated project called Vytis-2. The basic submachine gun has undergone some technological changes. Weapons of the type "Vitis-2" were used by the Lithuanian guard of honor.

In the early nineties, another version of the first Lithuanian submachine gun appeared. Vytis-3 modification was intended for use of 9x19 mm Parabellum cartridges. Ammunition of this type was purchased in Sweden. For the use of the new cartridge, the weapon has undergone some changes, but no major modifications have been made. "Vitis-3", like the previous family of weapons, had gas automatics.

The total number of Vytis machine pistols of three modifications is unknown. There are various estimates, but there is no official data on this. It can be assumed that no more than a few hundred weapons of three types were manufactured, after which production ceased. The first prerequisite to the abandonment of "Vitis" could be the independence of Lithuania. The Soviet "occupation" stopped, and the underground organizations were legalized. In addition, Lithuania received Soviet-made weapons, remaining in parts and in warehouses. Also, it should be noted that according to its characteristics, the Vytis family of weapons was inferior to any serial systems of a similar purpose.

Soon after Lithuania’s secession from the USSR, the designers, under the direction of A. Petresevichus, founded their own company, Vytis. Now they got the opportunity to work legally and count on the support of the military department. Already in the status of official gunsmiths, engineers began developing a new submachine gun called the Vladas.

It is believed that when creating the Vladas submachine gun, Petresevichus and his colleagues pushed off the English weapon STEN. Indeed, in the design of both samples are traced common features and the most noticeable of them is the maximum simplicity and low cost. Not being able to work with developed industrial enterprises, the designers of Vytis were forced to go along the already developed path and develop an extremely simple structure. 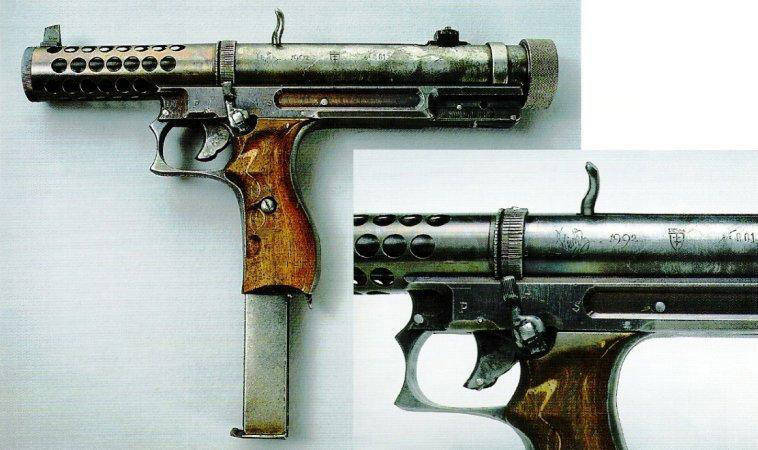 The receiver box of the Vladas submachine gun was a tube and a rectangular casing in its lower part with several openings and slots. Inside the tube and the casing, all elements of automation and firing mechanism were located. For ease of use, the submachine gun of the new model received a perforated cylindrical barrel casing. The diameter of the casing coincided with the diameter of the cylindrical part of the receiver, because of what they looked like a single piece. In front of the receiver was attached hollow handle fire control with the receiving shaft shop.

The desire to simplify the design of weapons led to the use of automation based on the impact of the free gate. This allowed us to get rid of a number of relatively difficult to manufacture parts, while maintaining acceptable characteristics. On the upper surface of the bolt there was a cocking handle, bred through the slot in the receiver. The type of firing mechanism is unknown. On the left side of the receiver there was a three-position flag translator of fire with a fuse function.

The Vladas pistol grip had a hollow metal base and wooden lining. The metal part served as the receiving shaft of the store. Apparently, on the new submachine gun used the same stores as on Vytis. The new weapon was designed for the cartridge 9х18 mm PM.

The submachine gun Vladas had specific ergonomics, the disadvantages of which outweighed all the positive aspects of the simplicity of the design. He had no butt, and sights were a front sight and a simple design, mounted on the upper surface of the receiver and barrel casing. To hold the weapon with both hands was offered for the handle and the cylindrical casing of the barrel. Given the size of "Vladas", we can assume that it was not very convenient.

Serial production of Vladas submachine guns started in 1992 year. The number of weapons produced by this model is unknown. The simplicity of the design made it possible to assemble new submachine guns in large quantities, using the available resources and equipment. As in the case of the previous Lithuanian development, the main raw materials for the manufacture of weapons were metal sheets. Nevertheless, the handicraft nature of the development and production could not affect the characteristics of the weapon.

Refusal of own development

A. Petresevichus submachine guns were created and manufactured under conditions of limited capabilities, which determined their appearance. In addition, it affected their future. A number of new weapons were manufactured, but they were used a little and not for long. With a large number of Soviet-made automata and pistols, the Lithuanian armed forces and security forces did not need the development of domestic designers. In this regard, the use of submachine guns Vytis and Vladas lasted only a few years, after which they were sent to warehouses.

After a fiasco, the firm Vytis dealt with more pressing issues. Instead of creating new weapons, designers began developing modernization projects for the existing one. Until the end of the nineties, employees of the company prepared several projects for the refinement and modernization of various models available in the troops of Kalashnikovs. However, these projects did not interest the military. In the late nineties, Lithuania was preparing to join NATO and made plans for the rearmament of the army. As a result, the armed forces received weapons of foreign manufacture. A niche of automatic weapons for a pistol cartridge firmly occupied the Israeli submachine gun IMI UZI and the German HK MP5.