How Europe with the beasts sued

12 May 2014
38
In the Middle Ages and in modern times, regular animal trials took place in Western Europe. Lawsuits against animals may seem like the height of idiocy (which they actually were), but the reasons for this can be explained if we take into account the superstitious mentality of a medieval person. With the light hand of the Catholic Church from the end of the XIII century. a genuine devil cult took root in society. Satan was seen everywhere - in the actions of people, animal behavior, household items, even in natural phenomena. In addition, the principle of "an eye for an eye, a tooth for a tooth" was widely spread.


Many court cases against animals are described in the classic work The Golden Branch by James George Fraser, an eminent British religious scholar, ethnographer and anthropologist.

"In Europe, until relatively recently, lower animals were fully on a par with people accountable to the law. Pets were tried in criminal courts and punished by death if a crime was proved; wild animals were subject to the jurisdiction of ecclesiastical courts, and the punishments they received were exile and death by means of a spell or excommunication.These punishments were far from comic, if it is true that St. Patrick drove into the sea with the spells of all reptiles of Ireland or turned them into stones and that St. Berr the nara, excommunicating the flies buzzing around him, laid them all dead on the floor of the church. The right to bring domestic animals to trial rested, like a stone rock, on Jewish law from the Book of the Covenant ("I will collect your blood, in which your life, will exact it from every beast "(Genesis, chapter 9, verse 5)). In each case, a lawyer was appointed to protect the animals, and the whole process — judicial investigation, sentence and execution — was conducted with the strictest observance of all forms of legal proceedings and the requirements of the law. Thanks to the studies of French antiquity lovers, the protocols of the 92 processes that passed through the courts of France between the 12th and 18th centuries were published. The last victim in France of this, one might say, Old Testament justice was a cow, which was sentenced to death in the 1740 of our calendar. "

If the Inquisition preferred the good old fire, then the secular courts of execution chose the most different ones - in accordance with the gravity of the crime. So, the donkey, brazenly devouring lettuce leaves in a foreign garden, was sentenced to ear deprivation. The Austrian court sentenced the dog that bit the official to "one year and one day in prison." Two killer pigs alive buried in the ground.

In most cases, limited to public hanging. It used to be that the animals were even dressed up in clothes, so that everything looked "like humans". 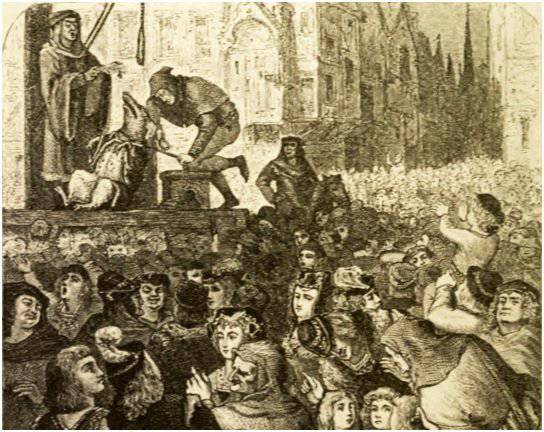 Execution of pigs in the middle ages 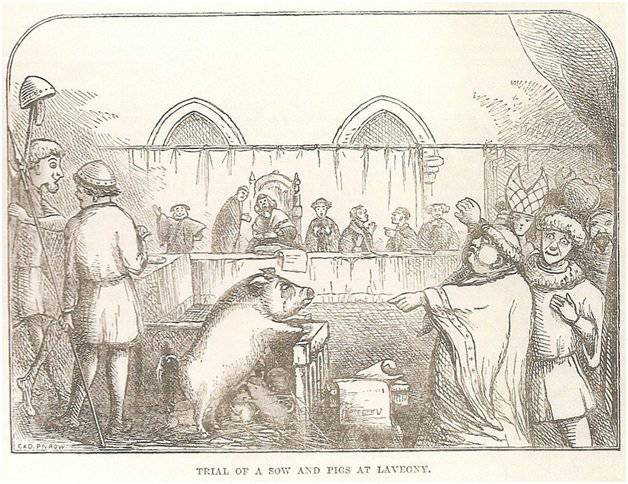 Trial of a pig

But criminal courts are only a small fraction of the proceedings. The church did not stand aside either, conducting mass courts over animals. Flies, caterpillars, locusts, cats, fish, leeches and even May beetles appeared on these vessels.

Over the last garden pests, referred to as bruises, in 1479, in Lausanne (Switzerland), a loud trial lasted two years. By a court decision, the six-legged criminals were ordered to immediately leave the country.

In Lausanne, such courts were held with enviable regularity. In addition to the May bugs there were tried, for example, caterpillars. When the latter ravaged this district, they were, on the orders of the bishop, thrice "called to the court" with a bell. At the same time, the laity fell on their knees and, having said the words “Our Father” and “Our Lady of the Virgin, rejoice,” three times, turned to divine help. And although the caterpillars did not appear to the court anyway, a specially appointed lawyer defended their interests. The "affair", of course, won the community. According to the verdict, the caterpillars, which became the shelter of the devil, were solemnly cursed in the name of the Father, the Son, and the Holy Spirit, and they were ordered to withdraw from all the fields and disappear. It was not there. The defendants, according to the testimony of the chronicles, "found that it was more convenient for them to continue living on the soil of Lausanne, and left the curses without attention."

Despite the fact that the caterpillars ignored church verdicts, the idea of ​​calling them to court attracted attention. Thus, in 1516, the inhabitants of the city of Vilnoz also sued the caterpillars. The sentence obliged the caterpillars to leave for six days the vineyards and lands of Vilnoz, threatening them in case of disobedience with a church curse.

In 1519, the process against field mice began in Glurns. Mice lost the case. The court ruled that "harmful animals called field mice are obliged to leave arable land and meadows for 14 days and move to another place."

And in the same Lausanne, having finished with the caterpillars, in 1541, a lawsuit was brought against leeches, which began to multiply with unprecedented speed, and it was necessary to step foot in a puddle, dozens of blood-suckers immediately dug into the leg.

The process diagram was usually the same: after self-evident triple failure to appear in court, the respondents — mice, cracklers, or caterpillars — had to make a decision in absentia. In it, guilty, under pain of horrific spells from the church pulpit, were instructed to leave a certain locality in due time. However, sometimes the same caterpillars were brought to the court in large numbers. As delegates from the "devil tracked community."

Processes with mass respondents usually took a long time. If single creatures were accused, then retribution for witchcraft overtook them quickly.

But most of all not lucky cats. Cats, to their misfortune, fit the role of devilish creatures better than anyone else: walking alone at night, heart-rending screams, luminous eyes in the darkness. In general, unholy behavior. Here it is clear to any fool that nothing happened without the devil. 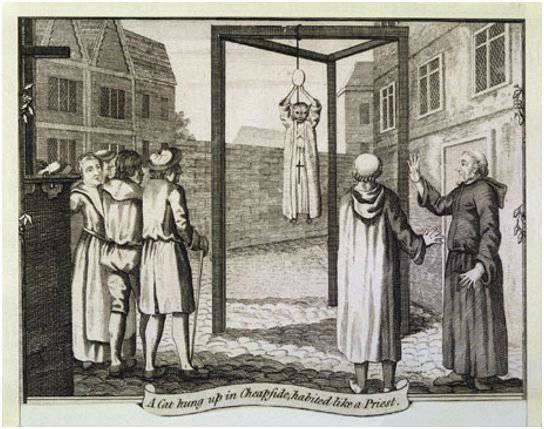 Hanging cats in the Middle Ages

In addition to the inquisitorial tribunals and secular courts, mass extrajudicial killings were organized on cats. In February, an annual festival called the Feline Month took place in the town of Ypres, when live cats were thrown from the central bell tower of the city. In case the beast remained alive, a pack of dogs was on duty below. 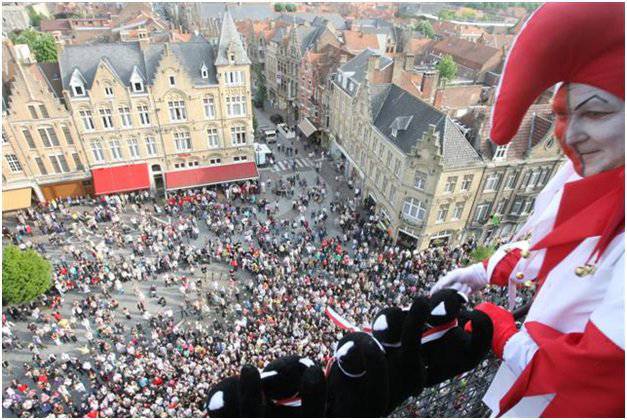 Kattenfestival in Ypres, Belgium. Nowadays, artificial cats are being dropped from the bell tower.

Festivities similar to Ipris existed in many regions of Western Europe: Flanders, Schleswig-Holstein, Upper Silesia, and others.

The day of the feast of St. John gained particular fame. 24 June was built gallows for cats in many city squares of France, in many cities fires were blazing. In Paris, a high pillar was erected on Greve Square. Upstairs hung a bag or barrel with two dozen cats. Large logs, branches and bundles of hay were laid out around the pillar. Everything was set on fire, and before the eyes of hundreds of merry idlers, poor animals were roasting, uttering horrible screams.

In the Ardennes (France), cats were burned at the stake on the first Sunday of Lent. 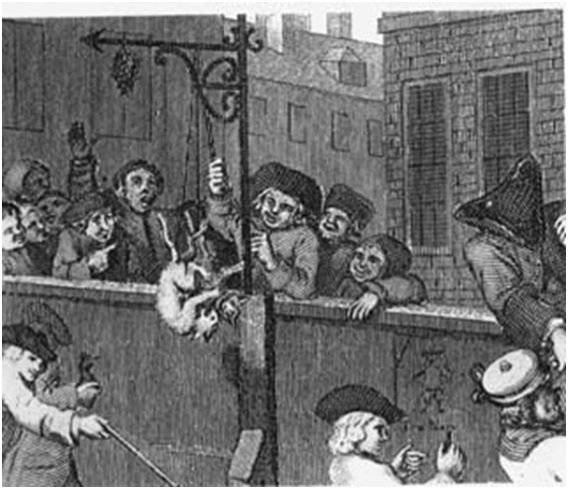 Execution of cats in the New time

The Inquisition and simple "conscious citizens" tortured and killed innocent "satanic offspring" in such quantities that the cats were threatened with almost complete annihilation. K XIV century. there are so few cats left that they could no longer cope with the rats that carried the bubonic plague. Epidemics began, in which, naturally, they blamed not the Inquisition, but the Jews (it was believed that the cause of the plague was that the Jews were poisoning the wells). "Responsible" for the epidemics was their "specialization", "carefully" assigned to them by the Catholic Church and the secular authorities.

In the wake of the pogroms that swept across Europe, about 200 Jewish communities were annihilated by a mob of smerds. It did not help. Then they switched to witches and began to burn them with incredible zeal, for which Pope-degenerate Innokenty VIII 5 December 1484 publishes a savage bull "Summis Desiderantes". Now on the fires of the Inquisition the witches and heretics will burn until the 18th century. Together with cats. Rats bred more. The result is known - up to half of the population of Europe died from the plague. The second half of the population that has not died of the plague, at that time, is no longer up to the cats. Cats begin to multiply, the number of rats and mice decreases, the plague calms down and ... with new vigor and with the same zeal, the destruction of the "devilish bastards" resumes. Mice and rats with joy observe from their holes, as cats accused of collaboration with witches and the devil again disappear one after another and die at the hands of the Inquisition and ordinary well-meaning Christians. Good mood promotes good appetite - at the beginning of the XVI century. rats and mice eat the crop in Burgundy almost completely. Hunger comes. And so on, in a vicious circle.

The church, as usual, is struggling with the misfortune of the old, proven method - causes rats to court. The epic process in the court of the Otensky church district, where rats were called to account, had to solve the problem with vile creatures once and for all. The trial was loud, rather long, the courtroom was shaken by the evidence of horrific atrocities of rats. But the court of the harvest did not add and slowly died away by itself, bringing the next laurels only to a lawyer.

And the surviving part of the population, tired to burn witches and cats to no avail, litigate with rats and smash Jews, comes up with a new enemy of Christianity - the werewolves. In the "enlightened Europe" begins the next holy war: the fight against werewolves.

Ctrl Enter
Noticed oshЫbku Highlight text and press. Ctrl + Enter
We are
"It was the devil's feast ..." Sturm GallipoliThe development of armor in the Middle Ages in Western Europe
Military Reviewin Yandex News
Military Reviewin Google News
38 comments
Information
Dear reader, to leave comments on the publication, you must sign in.