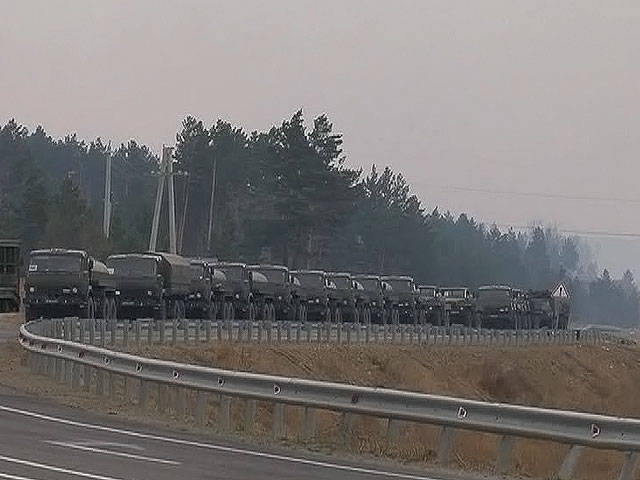 The bodies of the first two victims of the fire at a military warehouse in Transbaikalia have already been identified. One of them is the commander of the unit. Risking his life, he took people out of the fire in a company car. However, the truck was covered by an explosion, and the car burned down. The second identified victim is the warehouse worker. Total killed ten people. Sixteen wounded remain in hospitals. On the site of a burnt-out arsenal, heaps are being demolished.

This is the closest distance that is allowed to approach the warehouse today, where explosions thundered the day before. This morning I started to extinguish aviation.

All aviation equipment is equipped with spillway mechanisms. Water is taken directly from the river a few hundred meters from the place of extinction. Helicopters line up literally in the queue.

Crews of Mi-8 helicopters and IL-76 aircraft arrived in the region today and immediately began their work. Machines circle all day long and drop water into the forest near the arsenal. Despite the windy weather with such reinforcement from the air, the military manages to stop the spread of fire. In just one day, the fire was completely extinguished.

"To date, all the outbreaks have been eliminated, there is no danger to the population and the ammunition and surrounding fuel depot," said Russian Deputy Defense Minister Dmitry Bulgakov.

The fire started late in the evening and with sudden gusts of wind instantly spread to the territory where the ammunition was stored. More than twenty explosions thundered. A wave of detonation smashed windows in the homes of residents of two nearby villages. Twenty-three people turned to the regional hospitals for help. This is both the military and the civilian population, including children. Most have fragmental wounds, burns and traumatic shock.
"These patients, who are in the intensive care unit, are mine-explosive wounds, with damage to many parts of the upper and lower extremities, the face, and they have burns, but small area burns," says the deputy chief physician for the medical part of the city hospital 1 of the city of Chita Fedor Cheptsov.

More than a thousand people were evacuated. As promised by local authorities, residents will soon be able to return to their homes. And today they will start importing slate and window glass so that residents can renovate their homes.

"We will certainly help people, we will now determine the families of the victims, with damage, we will also help those who, unfortunately, loved ones have already left and those who, fortunately, survived, but their homes were damaged," reports Governor of the Trans-Baikal Territory Konstantin Ilkovsky.

The bodies of the ten dead were found at the site - they were all found in the truck. At Kamaz, the base commander and contract soldier, risking their lives, gathered people in order to have time to take them out of the fire. But the exploding shell did not allow them to leave the territory of the arsenal. The Ministry of Defense said - it is those who fought with the elements to the last. A criminal case has already been initiated on the fact of their death.