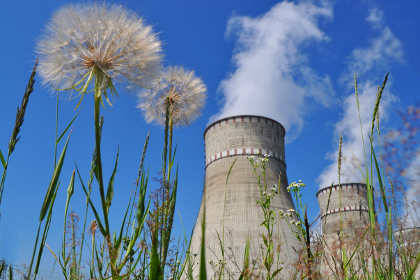 A few days ago, the International Union of Veterans of Nuclear Energy and Industry issued a statement in which it was noted that the use of nuclear fuel of American manufacture at Ukrainian NPPs with Soviet-type reactors installed is not provided for a technical project and does not meet safety requirements. The statement appeared because the Ukrainian Energoatom and the American company Westinghouse agreed to extend the contract for the supply of nuclear fuel to 2020.

As recalled RIA News", several years ago, the fuel elements of the production of this very “Westinghouse” were depressurized at the Czech Temelin nuclear power plant, and the Czech Republic then refused the services of the named supplier. Later, in 2012-2013, disruptions in the operation of American-made fuel assemblies were recorded at two units of the South-Ukrainian NPP due to the design flaws of the same “Westinghouse”.

“We believe that only a miracle at the South Ukrainian NPP didn’t cause an accident because of this fuel,” the statement of the International Union of Veterans of Nuclear Energy and Industry noted.

Recently, Energoatom and Westinghouse signed an agreement, which nuclear veterans rightly called cynical: “This decision is cynical because it was made almost on the eve of the next mournful date - the 28 anniversary of the global accident at the Chernobyl NPP that occurred in the result of such an irresponsible experiment on a working reactor. For the sake of political conjuncture, the life and health of millions of people not only in Ukraine, but throughout Europe, are now at risk. ”

We turn to a balanced opinion of the experts.

The decision of Ukraine to use American-made fuel at nuclear power plants looks like political blackmail, says Boris Kalin, head of the department of physical problems in materials science at MEPhI, whose words RIA News".

“In order to load a new fuel into the reactor, you need to be licensed. And since this has not been done, it will be the main obstacle that will disturb not only the Russian scientific community, but also the IAEA, because it is a violation of the holy of holies of atomic energy, ”said Kalin. Moreover, according to the expert, it is necessary to license the fuel only with the consent of the designers of the reactors of the nuclear power plants, and these are Russian specialists.

Comrade Kalin noted: “In this situation, we see complete disregard for the requirements of radiation safety. I think that the Ukrainian authorities will never make such a decision, because their specialists will not allow it. This is just political blackmail. If, God forbid, they make such a decision, they will be accountable to the world community. A normal person cannot do that. ”

The expert is, of course, right. Abnormally the very pursuit of politics ahead of the economy, and when politics are caught up by the “specialists” from Westinghouse, this means one thing: some people have decided to make a real nuclear testing ground out of Ukraine. By the way, the latter assumption has penetrated the press not only from A. Muzychko, who has learned something about the atomic secrets of the new rulers in Kiev. Now there are quite "official" news about this theme.

Leonid Savin ("Fund of Strategic Culture") recalls that on April X, the interim government of Ukraine issued a decree on the allocation of land with a total area of ​​23 ha (between the villages of Staraya Krasnaya, Buryakovka, Chistogalovka and Stechanka) for the construction of the Central spent nuclear fuel repository in the alienation zone of the Chernobyl nuclear power plant. This was said by the president of the Ukrainian "Energoatom" Yuri Nedashkovsky.

The new order provides for the entry into the storage of spent fuel from VVER-type reactors from three nuclear power plants: Khmelnytsky, Rovno, South Ukraine. For the time being, SNF is transported for temporary storage in Russia with subsequent reprocessing at the FSUE “Mining and Chemical Combine” (Krasnoyarsk Territory) and FSUE “PO“ Mayak ”(Chelyabinsk Region).

The analyst also recalls that, according to the secret agreements of the new Ukrainian government with European partners, Ukraine will store nuclear waste from the EU. There was information that “certain people in Kiev have already received the promised bribe for this”.

“For Ukraine, energy and political independence are closely interrelated. I join all USUBC members and make a toast to the success of these two great companies - members of the Council, as we all work to help Ukraine on its way to Euro-Atlantic integration and strong democratic statehood. ”

This Mr. Williams, the analyst writes, is known as a lobbyist in Ukraine for the interests of Shell, Chevron and ExxonMobil. He is also associated with Freedom House, the organization responsible for the “color revolutions” in Eurasia, North Africa and Latin America.

So, “strong, democratic statehood” in Ukraine becomes nuclear statehood. And Russia, apparently, should be afraid of Chernobyl 2.0 near its borders. It turns out that the Americans in one fell swoop of two birds with one stone — and an atom scares Russia, and occupy their labor force. Well, both corporate bosses and their lobbyists will be enriched. And the lobbyists of Westingazu are strong: it is known that Hillary Clinton, as Secretary of State, lobbied for the interests of this company in Europe (although unsuccessfully). Here is such a high level. Therefore, there is no doubt: in Ukraine, this company will certainly pass and will do whatever it wishes there.

Everything goes according to plan

“Ukraine renewed its contract with the American company Westinghouse for the supply of nuclear fuel and expects another batch of assemblies by the end of this year,” writes Inna Koval, a journalist for the Ukrainian editorial board. "Forbes".

December 2014 - January 2015 in the course of scheduled preventive maintenance, the first batch of fuel modified by Westinghouse (TVS-WR) will be loaded into the third power unit of the South-Ukrainian NPP. As for the approvals, they will be received from the State Nuclear Regulatory Inspectorate of Ukraine.

The journalist quotes Sergei Kondratyev, head of the economic department of the Institute of Energy and Finance Fund: “In general, the experience of using fuel assemblies produced by the Westinghouse in Soviet-type reactors is rather negative. There were certain incidents at nuclear power plants in the Czech Republic, after which the Czechs decided to abandon these assemblies. The same kind of incidents occurred in Ukraine itself in the 2012 and 2013 years. Following the results of the incidents that took place, it was also decided to refuse to cooperate and fully return to the contract with Rosatom.

Forbes appealed to two specialists of the State Nuclear Regulatory Inspectorate of Ukraine. It turned out that this inspection did not accept any documents related to the ban on the use of Westinghouse fuel. On the contrary, in the 2012 year, GIYARU decided to continue the pilot operation of the TVS-W fuel.

As for the quality of the assemblies, there are claims to both Russian and American. Russian assembly very bent, sometimes more than stated in their data sheet. Bend and American. But the Russians also refuse. “Every fuel of the new modification has problems. Westinghouse makes square assemblies for its reactors, here we ordered hexagons for them. And "Westinghouse" began to refine. Similarly, the Russians: every new modification, in this case, TVSA, needs some work. But the Russians still have “failures”, TVELs are leaking, ”notes Olga Kosharnaya, Ph.D., lead researcher at the National Institute for Strategic Studies (Ukraine).

Also in the material it is reported that the fuel elements of the company "Westinghouse" in the assemblies were always tight. The release of radioactive fission products from them was not recorded.

Further, it is noted that after the incidents with the American fuel, Energoatom acquired a stand for the inspection of the Westinghouse cassettes, at which an in-depth survey of the state of the assemblies was conducted. The Russian side was invited to research, but the experts could not come. Today, according to Forbes, 66 of TVS-W and 97 Russian TVEL assemblies is operating at SUNPP.

The article also mentions the argument that is usually given by the side that is against the Westinghouse. Speech on the further disposal of spent nuclear fuel. After all, the Russian SNF is sent to Russia. The journalist cites the words of Mikhail Umants, advisor to the general director of the NSC “Kharkov Institute of Physics and Technology”: “Neither the West nor America will accept spent nuclear fuel. And Russia is someone else's spent fuel, in all likelihood, too. And if it does not accept, then our units will work as much as possible to supply spent nuclear fuel to the pre-reactor storage facilities — not even the storage facilities, but the pre-reactor pools. How much they are now filled is not known. Therefore, it is impossible to answer the question of how long nuclear reactors will work in this case. This is one of the risks that need to be addressed only in a comprehensive manner. ”

Further, Forbes announces the decision of the Ukrainian Cabinet of Ministers on April 23, which allowed Energoatom to develop a land management project of 45,2 ha in the Chernobyl nuclear power plant alienation zone. By the middle of May (!), The American company Holtec will provide a plan for further steps in the implementation of the project. And by the end of 2017, the storage facility will already receive the first batch of spent fuel.

Here we add that called "Holtec", like "Westinghouse", is included in the US-Ukraine Business Council (USUBC), the one that is headed by M. Williams, a specialist in Ukraine, and color revolutions.

Well, in the United States they don’t see any problems with Westinghouse and its activities in Ukraine.

The representative of Westinghouse refuted the statement of Russian nuclear scientists that the fuel used by the company is incompatible with Ukrainian nuclear power plants. According to Korgevega, this claim has no basis.

Mr Korteweg said that Westinghouse had proved that its fuel was fully compatible with reactors operated in Ukraine (it was a nuclear power plant in southern Ukraine).

And those questions that allegedly arose in southern Ukraine because of the fuel of the “Westinghouse” represent the fruit of premature and erroneous judgments. There were no problems associated with the Westinghouse fuel, in fact, explained the company representative.

As for the Czech Temelin NPP, the problems that were noticed by 10 years ago were resolved. Everything is fixed.

So, everything is fine, beautiful marquise. It is clear from American statements that Westinghouse has zero atomic problems, and therefore, at the end of 2014, it can load the first batch of its fuel into the third unit of the South-Ukrainian NPP.

As for the American "production wastes", they will be buried on 45,2 hectares in the exclusion zone of the Chernobyl nuclear power plant. By mid-May, 2014, another American company, Holtec, will provide a project implementation plan. In 2017, the repository should take the first batch of spent fuel.

Recall in conclusion that both Holtec and Westinghouse are members of the US-Ukraine Business Council, chaired by Mr. M. Williams, a great specialist in Ukraine and in color revolutions.