"It's only the beginning…" 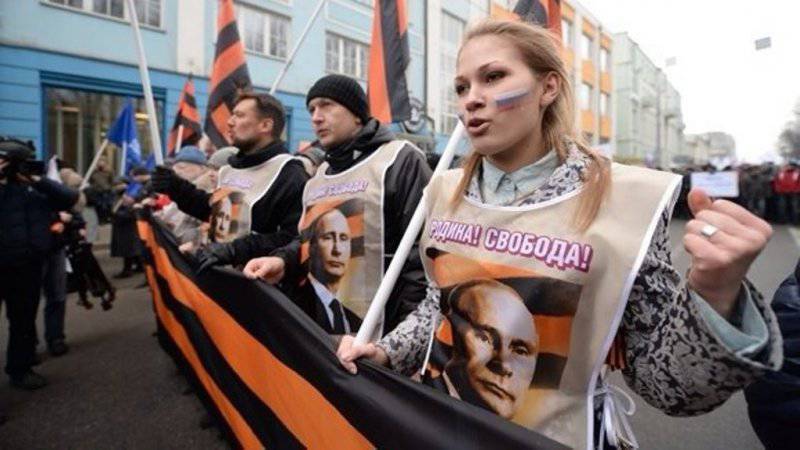 These words were said in an interview by an employee of the “Berkut”, and I always remember them when the conversation about events in Ukraine comes. A man from the street usually asks: What does Russia need in Ukraine? Attach a few more areas, or the whole of Ukraine, like the Crimea? Everything seems to this goes ...

This question is not easy, it seems. President Putin has repeatedly said that Russia does not intend to “join” Ukraine and interfere in its affairs if the rights of the Russian-speaking population are respected. But ... political speculations, and the propaganda efforts of Washington and its mass media service providers to expose Russia as an “aggressor”, are felt in their minds, and the topic of “Ukraine’s accession”, one way or another, finds its response.

One phrase to this question can be answered like this: Russia needs “Ukraine Yanukovich” without Yanukovich, in a foreign policy sense, of course. And for this, Russia would like to physically return Yanukovych to Ukraine. Proof of? It was this goal that Russia pursued when it gave 3 billion dollars and other preferences to the pre-default Ukraine: it was given “under Yanukovych”. Why?

“Ukraine Yanukovych”, in general, gave Russia the opportunity to solve both of these tasks. “Square” followed the so-called “multi-vector” policy, which assigned it the role of a “bridge” between Russia and Europe. This was beneficial to Ukraine: industry was provided with orders, the “bridge” policy ensured the “neutral” sovereignty of Ukraine between the two “poles of power”.

It was this balance of interests that blew up Euromaidan, which, in turn, was an instrument of the policy of the Euro-Association and the Eastern Partnership of Washington, which was not hidden and even propagandized. “Ukraine is tse Europe!” But now it becomes obvious already for almost everyone that this “explosion” in itself was the only goal of Euromaidan, that is, Washington. The States decided to simply “brew porridge in Ukraine”, in the words of Putin, or “controlled chaos”, in the terminology of the Institute of Difficulty in Santa Fe (USA).

Today, in the context of the Bandera Maidan coup in Kiev and the “brewing porridge” - in fact the All-Ukrainian revolution! - Russia in Ukraine solves the same dual problem. In these new conditions, it can be solved in different ways, according to circumstances that depend not only on Russia. (While the priority is given to the physical protection of the Russian-speaking population.) In what forms can this dual task be solved today, from the point of view of common sense?

1. The return of “Yanukovich”, that is, the restoration of some kind of “multi-vector” Ukraine-bridge, is the official offer of Russia to the West, it is unequivocally derived from the Agreement from February 21, and the Geneva Memorandum on Ukraine. But rejected by the West.

2. If the interests of the Russian-speaking Ukraine and the related military-industrial complex in the framework of the “integral Ukraine-bridge” fail to protect, the question of protecting these interests within the framework of the federal structure of Ukraine, with the predominant influence of Russia in the Ukrainian New Russia, becomes relevant. That is, some kind of federalization of Ukraine. This option is now the main.

3. If the federalization of Ukraine proves impossible, then Russia will have no choice but to support the independence of Ukrainian Novorossiya, or even to offer it to become part of Russia. This is how the circumstances, and all over the world. But the main thing is how the All-Ukrainian Revolution provoked by the coup in Kiev will develop.

The price of the issue for Russia: the loss of Ukrainian Novorossia will require the creation in Russia of the lost power of the military-industrial complex, which will take up to two years plus financial costs. And the moral and moral disaster: about 20-million Russian-speaking population of Ukraine threatens to become a people of the “second class” on their land. The Bandera, neo-Nazi (!) Regime in Ukraine will become a springboard for provocations and instability on the borders of Russia, this is the program point of the Right Sector Yarosh, and Tymoshenko and many other “independent Ukrainians” have stated such plans. Or maybe just a NATO base.

Price issue for the West: it is a "mirror" of the Russian. The defense order of Russia is partly placed in Ukraine, which facilitates its implementation and creates these “threats” for the West. In the Ukrainian Novorossia, Russian influence persists through the Russian-speaking population, and, accordingly, Western influence is weakened.

In general, it was known from the very beginning that the Euro-Association of Ukraine has as its main objective the economic destruction of the military-industrial complex, through breaking ties with Russia. The tragic consequences of this for the Russian-speaking population of Ukraine, losing their jobs and, therefore, their “piece of bread”, the soulless “humanists” from the European Union did not care at all. And today they do not care for all the "boiling porridge": two months have passed since the coup d'etat, but they did not give a cent to their puppets in Kiev!

... Politics is a pragmatic thing, prudent, so the main thing in this all-Ukrainian revolutionary mess is the inevitable complication of the fulfillment of the defense order in Russia, the delay of two whole years is serious! I don’t want to give an analogy, but it suggests: the USSR didn’t have enough two years too to rearm the army, and at first it was necessary to repel Hitler’s attack weapons.

Therefore ... for the February Maidan coup in Ukraine and its fascism, Washington must pay a high price. We must face it: the West supports the neo-Nazis in Ukraine against Russia, that is, it again becomes fascist, as before Hitler came to power in Europe ...

Ctrl Enter
Noticed oshЫbku Highlight text and press. Ctrl + Enter
We are
Situational analysis of the death of the MH17 flight (Malaysian Boeing 777), made on the basis of engineering analysis from 15.08.2014Results of the week. "This is not for you ..."
Military Reviewin Yandex News
Military Reviewin Google News
145 comments
Information
Dear reader, to leave comments on the publication, you must sign in.