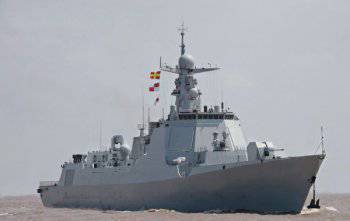 As the Periscope.2, Renmin portal has published an article by famous Chinese military scientist, Rear Admiral Yin Kyaw, in which he shared information about the characteristics of the new destroyer of the 052D project. According to Rear Admiral, the capabilities of the ship roughly correspond to the capabilities of the American Arleigh Burke, but at the same time it has a lower displacement and missile ammunition.


It is noted that the cost of the newest Chinese surface ship with a displacement of 7000 tons is approximately 560 million dollars.

According to Yin Zhuo, two installations of vertical launch with 64 cells will allow 2-3 to repel massive air attacks. In addition, the destroyer can carry anti-submarine missiles, as well as cruise missiles to destroy ground targets.

The ship is equipped with an advanced digital radar complex with a wider range of headlamps and the number of accompanied targets, a new air defense system with HQ-9B missiles towed by an HUS and two PLO helicopters. It is also reported that Chinese experts managed to achieve a reduction in acoustic and radar conspicuity of the destroyer.