Why riot South and East of Ukraine? 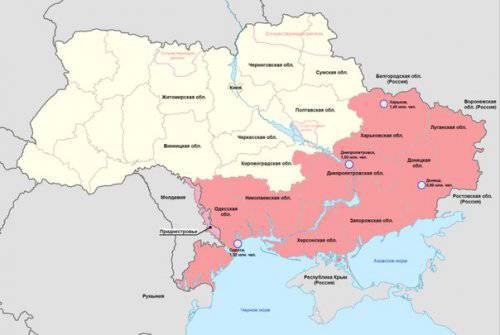 People’s protest in the regions of the South-East of Ukraine against the nationalists who committed an armed coup in Kiev is attributed — at the suggestion of the US Department of State — to Russia's interference in the internal affairs of the neighboring state. In fact, the outbreak of civilian resistance in these industrial areas has nothing to do with the alleged intrigues of the Russian special services. A direct impetus to current events was given by the seizure of power in Kiev by groups of interests with aggressive anti-Russian ideology, while the deeper causes of the movement are rooted in the ethnic composition of the population, stories settlement and development of these lands ...

After the destruction of the ancient Russian state by the khan of Batu in 1238-40, the lands to the south and east of Kiev turned into a deserted desert, as Hungarian monk Plano Karpini, who traveled to Karokorum, wrote in his travel notes. In the Russian annals of the XIII-XV centuries, the lands stretching to the south-east of the Ryazan-Tula-Bryansk-Chernihiv-Kiev-Vinnitsa line, including 2 / 3 in modern Ukraine, were called the “Wild Field”. The area on which Zaporozhye, Dnepropetrovsk, Poltava, Kharkov and even Sumy are today was the personal lands of the family of the Golden Horde Khan Mamai, who suffered a terrible defeat from the Russians in 1380 on the Don River near Tula. 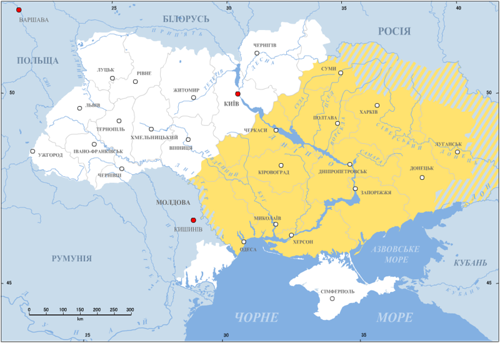 After the collapse of the Golden Horde at the end of the 15th century, the Russians began to move south and east to protect their state from the annual raids of the nomads of the Crimean Khanate and the Nogai Horde. The most advanced Russia in the “Wild Field” during the reign of Ivan IV the Terrible, moving its borders to the Caspian and Azov seas. The southwestern border of the Moscow kingdom passed west of the modern Ukrainian cities of Chernigov, Sumy, Kharkov, and Donetsk. For its defense in the uninhabited steppes, many cities and fortresses were built, inhabited by volunteers from the northern and central regions of Russia. 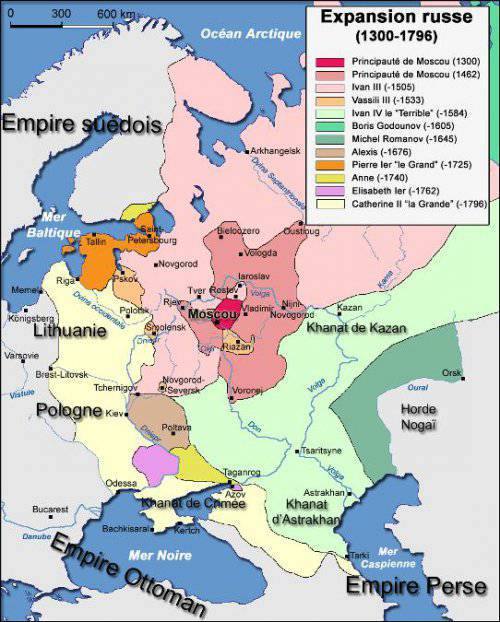 However, during the time of Ivan the Terrible, the “Wild Field” was not completely uninhabited. In the valleys of the Don and Seversky Donets rivers, as well as their tributaries, at that time 200 was inhabited by subethnos, known to the whole world as Don Cossacks. It is known that the Moscow Prince Dmitry, who received the nickname Donskoy after the victory over Khan Mamai in 1380, on the eve of this battle the Cossacks of the Don village of Sirotinskaya presented one of the most revered icons in Russia today, the icon of the Don Mother of God and vowed to protect Russian lands from nomadic raids.

The Cossacks initially emerged as an international community of free warriors-horsemen, who did not recognize any rulers over themselves and joined the military campaigns of various armies for profit. In peacetime, they were engaged in the cultivation of bread and crafts, but because of their proximity to the nomads, at any moment they were ready to become warriors again. All important questions of the life of the settlement-village were decided by the general meeting, at which each Cossack had the right to express his opinion and vote on an equal basis with others. The Cossacks elected their commanders and officials from among themselves either for a fixed period of time or for the duration of the campaign. To address issues relating to the group of villages or the whole Cossack region, representatives were elected in public. After the expiration of his term of office, such a representative turned into an ordinary citizen.

Personal slavery among the Cossacks never existed. The captured enemies had to work for a certain period on their master (no more than 6 years), after which he was given the choice: either to freely return to his homeland, or to become a Cossack and get equal rights and duties with all. Any man who declared this, whoever he was before, could become a free Cossack, and after that no one had the right to enslave him. This was often used by fleeing serfs from the Polish-Lithuanian Commonwealth and Russia, who were guaranteed freedom by the Cossack community, even if they were found by the former owner. This rule sounded like a categorical imperative: “There is no issue from the Don”.

The lands of the Don Cossacks were located in the adjacent territories of the current Russian Federation and Ukraine. They included the entire modern Luhansk region, half of Donetsk and part of the Kharkov region. Western border Don troops were passing along the Kalmius River, which flows through the city of Donetsk.

After the conquest of the remnants of the “Wild Field” of the Crimean Khanate and the Ottoman Empire at the end of the 18th century, Russia, which mastered the Urals and Siberia, was sorely lacking in the vast steppe expanses of the south of modern Ukraine. That is why Catherine II the Great and the subsequent Russian emperors invited the inhabitants of European states to settle in the space from Odessa to Rostov. In Novorossia, as they began to call these lands after the name of the center of the province, the city of Novorossiysk (now Dnepropetrovsk), in addition to Russian villages and small towns, many Polish, Bulgarian, Greek, German, Serbian, Jewish, Moldavian, and even Swiss settlements appeared.

The industrial boom in the South-West of the Russian Empire that began in the middle of the 19th century confused the ethnic map of the former “Wild Field” even more. Along with the Russian capital, the industry of New Russia was raised by businessmen and specialists from all over Europe. For example, Donetsk, before 1920, was called Yuzovka after the English businessman John Hughes, who founded the city. At the same time, the Russians remained the most numerous and uniting ethnic group in the region.

The turning point occurred after the 1917 revolution of the year, when the Kiev Central Central, which was not elected by anyone, declared “Ukraine” territories, not only populated mainly by Ukrainians, but all lands where ethnic Ukrainians lived in significant numbers, including the Kuban, the North Caucasus and the Lower Volga. Since the Bolsheviks benefited from the creation of Soviet Ukraine, they supported alternative government bodies that met in Kharkov. And for the sake of increasing the number of supporters in the republic, Donbass was transferred to the Ukrainian SSR, which had never had anything to do with Ukraine.

In the framework of the policy of “indigenization”, that is, bringing representatives of national suburbs into power, mass falsifications were carried out at the 1926 census of the year. On the instructions of Moscow, instead of real ethnicity, in the corresponding column Russians, Bulgarians, Greeks, Jews, Poles indicated “Ukrainian” only because of their residence in the Ukrainian SSR. The same thing happened in 1930-s when issuing passports, and such an entry could not be changed in those years. As a result, the number of “Ukrainians” in the former “Wild Field”, populated mainly by the Russian population, was increased so much that the belonging of Novorossia to Ukraine seemed to stop asking questions.

All the years of Ukraine’s independence, the inhabitants of its southern and eastern regions for the most part were very ironic about historical myths created by nationalist-minded pseudo-historians. After all, here, in the South-East of today's Ukraine, the overwhelming majority of people remember both their Russian ancestors and the development of the “Wild Field” by Russia. And since the new Kiev regime has already declared them to be "second-rate" people, subject to, if not destruction, then severe discrimination, they are striving to where their ancestors came from, where they are considered equal, to Russia.

Ctrl Enter
Noticed oshЫbku Highlight text and press. Ctrl + Enter
We are
As NATO instructors in the territory of a military base in Estonia, trained Ukrainian nationalistsTsar Batu
Military Reviewin Yandex News
Military Reviewin Google News
23 comments
Information
Dear reader, to leave comments on the publication, you must sign in.