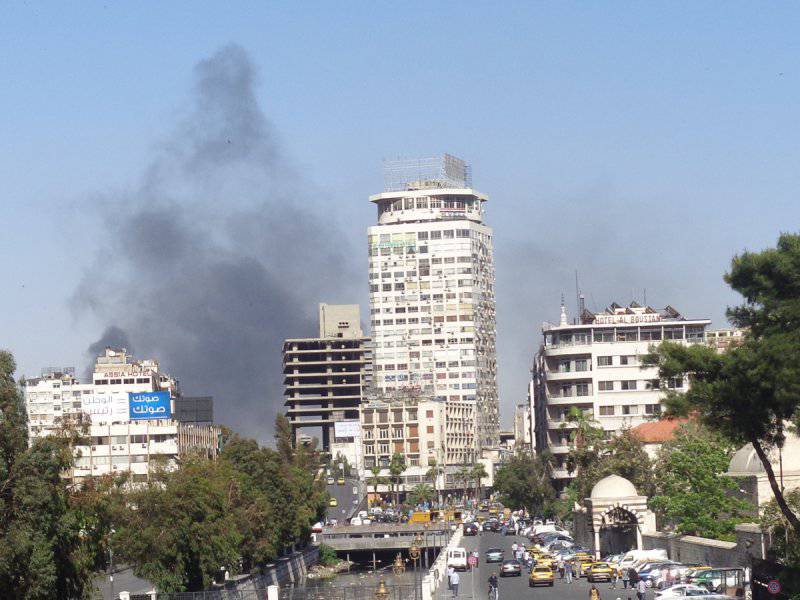 Syria is continuing the process of nominating candidates for the upcoming June 3 presidential election. By now, seven candidates have already been registered. Until a certain time, the main intrigue remained the question of whether the current president, Bashar Al-Assad, will be running for the presidency.

External forces that do not want Syria to do good, but, on the contrary, supply weapons murderers under the guise of "democracy", categorically opposed to the leader who dared to resist the global dictatorship, participated in the presidential elections in his own country. A similar wish - not to participate in the elections - was put forward by Bashar Al-Assad and the UN special envoy for the SAR, Lakhdar Brahimi, which, however, discredited himself as a mediator.

But there is no such law that would prevent a Syrian citizen who has lived at least 10 in recent years in the country and meets the other criteria stipulated by the Constitution, to nominate his candidacy. Moreover, there are no such points in international law that would allow external forces to intervene in the electoral process and dictate who should run and who should not.

But Washington, where in recent years the names of those in power have changed, but the essence of the ruling regime has not changed at all, once again it shows its complete contempt for international law and the simple rules of human society. The satellites, hurrying to call the Syrian elections “illegitimate” in advance, sing along with him.

However, only people can give legitimacy. And not only through ballot boxes. In many cities of Syria - in Damascus, Suwayda, Tartus, Latakia, Homs, as well as on the territory of Aleppo, not seized by terrorists, after the news of the nomination of his candidacy by Bashar al-Assad, mass spontaneous demonstrations took place. The people, the Syrian people, people of all ages - from children to very old people - took to the streets to support their national leader. And this is a clear indicator of popular support. Although, of course, everything will be decided not at street demonstrations, but at elections, as in any truly democratic country. But the countries that are now opposing the elections to the SAR love to talk about democracy so much ...

The situation is overshadowed by the ongoing terrorist attacks and mortar attacks from the so-called "opposition." Innocent citizens continue to die. The terrorists, and, accordingly, their sponsors in the West, continue to avenge the Syrian people for the fact that their position is not in their favor.

Here is a summary of the crimes of the so-called "opposition" committed against the people, only in the last three days.

27 in April in the city of Damascus on the square Zablatani hit three shells fired by bandits. One person died, nine were injured. Two more shells exploded in Al-Kazzaz quarter, a child was injured.

In the Mezze area, terrorists launched a bomb planted near a bus stop. Three people were injured.

On the same day, in Aleppo, 15 mortar shells were fired by militants in the Bab Al-Faraj, Bustan Kuliab areas, as well as on Varum Street, Al-Qasr, Al-Manshiya and Saba Bahrat. The shelling claimed the lives of a 24 man. More 50 suffered.

In Homs, Zahra district was shelled. The shells were fired from the village of Telbis, which is under the control of illegal armed groups. A woman died, 13 people were injured.

Another projectile landed at the An-Nahda hospital, two citizens were injured.

As a result of the shelling of the village of Jaberia, in the province of Homs, the mother was killed and her child was injured.

In the north of the country, in the town of Idleb, terrorists fired at the Al-Saura quarter from mortars. One resident died, two were injured.

Often, gangsters choose their "favorite" neighborhoods of cities and individual settlements for attacks and terrorist attacks. One of these places, the most shelled "opposition", is the city of Jaraman province of Damascus. The inhabitants of Jaramana steadfastly resisted all attempts by terrorists to break into the city. Several major attacks also occurred there. If in Syria there was a Soviet tradition to assign cities the title of Heroes, then Dzharamana could already claim the status of a city-hero.

28 April for this small town was released - for the umpteenth time - 5 shells. One person died, six were injured.

Two mortar shells exploded in the city of Damascus in the area of ​​Zablatani (another place hated by bandits). One person was killed, 17 injured.

And one more frequently shelled place is Abbasiin Square. (The gangster's nest in the suburb of Dzhobar is located very close by, and from there the man’s executioner died, four were injured.

In the town of Idleb, 23 mortar shells were fired at various locations. Killed woman and three children. 15 citizens were injured. Said SANA agency correspondent that the terrorists fired 23 mortar shells in the Al-Slaib quarter, Hanan Square, Masaken Al-Mualimin and Al Utfiyya districts of the city Idleb. As a result, three children and a woman died, another 15 people were injured.

29 April in Al-Shagur quarter of Damascus, two mortar gangster shells hit the school. 14 people died, 86 were injured. Most of the victims of this terrible crime are schoolchildren.

In the area of ​​Abbasiin Square, 8 people suffered from a similar crime.

In the city of Homs, a double terrorist attack occurred - first a car bomb exploded, after a while another one. This is done by criminals specifically to make as many victims as possible. 40 people died. More 100 suffered.

In addition, in recent days, terrorists have intensified attacks against power supply facilities. As a result, in the cities in the south of Syria, including the capital, there are serious interruptions in the supply of electricity, which, again, affects civilians.

Very few people write about the daily crimes of the “oppositionists” against the Syrians, especially in the West. There they feel that such an "opposition" is unlikely to receive at least some support from the people it is destroying.

The other opposition, which is one without quotes, which is aimed at an honest, political struggle, is being ignored in the West. And, meanwhile, it exists. Thus, in addition to Bashar Al-Assad, six more people nominated their candidacies for the upcoming elections. There is a woman among them. The latter fact irritates one of the main enemies of Syria - Saudi Arabia, where a woman cannot even get behind the wheel of a car (and there is nothing to say about elections in this monarchical regime). However, the West has been trying for more than three years.
it is Syria that is “democratized,” and to all human rights violations by its oil allies, it stubbornly closes its eyes ...

Ctrl Enter
Noticed oshЫbku Highlight text and press. Ctrl + Enter
We are
Damascus: mortar rainsBashar al-Assad: In Syria, not the “revolution” that the enemies are talking about, but the revolution of the army and the people against terrorists
Military Reviewin Yandex News
Military Reviewin Google News
6 comments
Information
Dear reader, to leave comments on the publication, you must sign in.