After the death of Stalin in the struggle for power, a succession of reorganization went on. The concentration and redistribution of power in the country between the successors of the leader expressed themselves in the merger of many departments. In 1953, the Ministry of Power Plants and the Electrical Industry of the USSR was formed on the basis of a number of ministries, which included enterprises of the radio electronic industry. But time has persistently demanded that the country's leadership independently design a booming industry at the state level.

The intensive work of the radio industry in the country began at the end of the Great Patriotic War and in the post-war years.

Since the radio industry was not in the priority areas of industrialization, the USSR entered the war, having isolated instances of radar technology and lagging far behind the radar of Germany, England and the United States. 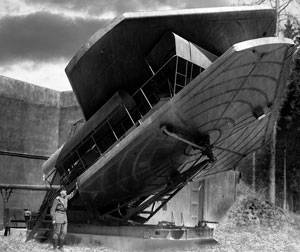 A number of decisions on the creation of individual samples of radar equipment were made already during the war. In July 1941, in the Moscow air defense zone, a radar station for airspace control RUS-2 was developed by NII-20 (now the All-Russian Scientific Research Institute of Radio Engineering - VNIRT). The station timely detected more than 200 bombers raid on Moscow on the night of July 22, 1941, which allowed it to take off in advance Aviation and put on high alert anti-aircraft artillery.

The Moscow Radio Plant, evacuated to the city of Sarapul in 1941, turned out to be the only enterprise producing radio navigation equipment for transport and military aviation. During the war years, the plant produced 50 pieces tank radar.

10 February The 1942 of the State Defense Committee adopted a resolution on the development of a gun-laying station (SLA) for the air defense forces and its mass production. The task was completed thanks to the work of the team of the plant-institute No. 465 (later renamed the Scientific Research Electromechanical Institute). From the beginning of 1943, the plant began mass production of the SON-2 station.

The company is also entrusted with the execution of the order for the development and production of the aircraft identification device “friend-foe”. In the course of the war, the devices "friend-foe" in the required quantities began to be supplied to the Air Force. In the future, the development of such systems was carried out at the Scientific Research Institute-17 (now OJSC “Concern of Radio Engineering“ Vega ”), and then at the Kazan Research Radio Engineering Institute.

Another difficult task of wartime was the creation of aircraft radar equipment. In record time in July, the first domestic radar station Gneiss-1942 developed by VNIRT was put into service on 2. The government's task of releasing 1943 sets of new stations in 200 was exceeded.

The next achievement is the creation of radar-based fighter aviation guidance devices on enemy aircraft in the absence of visibility called “Biryusa”.

The most important role in the development of radiolocation was played by the decree of the State Defense Committee of 4 in July 1943 of the year “On radiolocation”, issued before the start of the Battle of Kursk. The People's Commissariat for the Electric Industry organizes the Main Directorate of the Radar Industry consisting of three institutes and five factories. The All-Union Scientific Research Institute (nowadays the Central Research Institute of Technical Research) became the head organization.

A radiology department has been established at the Moscow Energy Institute to train qualified workers for the radar industry plants. Organized 15 vocational schools with a contingent of students 10 thousands of people.

20 August 1945 two years after the use of nuclear weapons in Japan, the State Defense Committee set up an ad hoc committee for the preparation and production of the atomic bomb, led by Laurenti Beria. Simultaneously with the development of nuclear weapons, it was necessary to speed up the creation of their means of delivery and to multiply the capabilities of air defense. To this end, 28 June 1946, the management system of enterprises of the radar and electronic profile has been changed. From the Ministry of the Electric Industry (15 in March, the 1946-th People's Commissars were renamed into the ministries) were singled out at the suggestion of the Radar Council of the Ministry of Communications Industry, headed by Ivan Zubovich.

From the beginning of the 50-s, the system center of work in the field of anti-aircraft weapons control for the country's air defense system has been formed.

The development of KB-1 (now OAO GSKB Almaz-Antey) in close cooperation with other enterprises of the stationary system Berkut (later C-25) became a fundamental step. Pavel Kuksenko and Sergo Beria were appointed chief designers, and Alexander Raspletin became the soul of the development, as well as subsequent air defense systems. His brilliant ideas were implemented in the creation of the original missile guidance system of the Berkut system.

Serial production of C-25 and subsequent systems was entrusted to the Kuntsevo Electromechanical Plant (now MRTZ). As a result of strengthening the material and technical base and carrying out reconstruction, the plant manufactured thousands of air defense complexes of several generations.

The experience of creating the C-25 system laid for many years the traditions of close cooperation between the customer’s specialists and weapons developers at all stages of creating new equipment, the ability to upgrade each new system, and the ability to make changes to the already manufactured equipment on the move, thus reducing the time it takes for modern weapons to be received. .

It was not by chance that at one of the meetings with the command of the Air Defense Forces and the heads of defense ministries, the main leader of the Soviet military-industrial complex, Dmitry Ustinov, said: “We all came out of the 25 system”.

New impetus for the development of the radio industry and electronics gave the war in Korea 1950 – 1953. She demonstrated that radio can dramatically reduce air losses. This forced the country to follow the path of the earliest creation of equipment in this direction. The Soviet Union joined the race of electronic weapons.

In the postwar period, the radar council is tasked with creating a new generation of electronic weapons. 10 July 1946 was approved a three-year plan for the development of radar, and soon the council was reorganized into the Committee on Radiolocation at the Council of Ministers of the USSR headed by the Chairman of the USSR State Plan Maxim Saburov.

The activity of the committee played a big role in the development of the whole complex of radio electronic systems. The research institutes and factories created in the post-war years, trained engineers and designers became the backbone of the radio-electronic industry.

The state did not have a single body for managing military-industrial affairs, but as international tension grows, its structure changes significantly. The search for a rational organization for managing the military-industrial complex was multi-stage and controversial, which indicated an extremely complex functional relationship between its member enterprises and organizations.

By decision of the Central Committee of the All-Union Communist Party (Bolsheviks) and the Council of Ministers of the USSR in February 1947, nine branch bureaus were organized that dealt with issues of the defense industries. The bureau became the prototype of the future famous "nine" of the ministries of the defense complex.

From February 1951 to October 1952 was operated by the Bureau of Military Industrial and Military Affairs under the chairmanship of Nikolay Bulganin. The bureau dealt with issues related to the consideration of plans for military orders, research work on military equipment, adoption of new models and decommissioning of obsolete ones, and others. There was no separate bureau office.

One of the leading places in the management system of the defense industrial complex was occupied by the Department of Defense Industry of the Central Committee of the CPSU, created at the height of the Cold War.

The business style of the defense department was formed by Dmitry Ustinov, who held major positions in the party and the state. For him, there were no secondary issues and in the course was the expression "to refine the question before the ringing." The department was liquidated after the events of August 1991 by order of the presidents of the USSR and the RSFSR Mikhail Gorbachev and Boris Yeltsin.